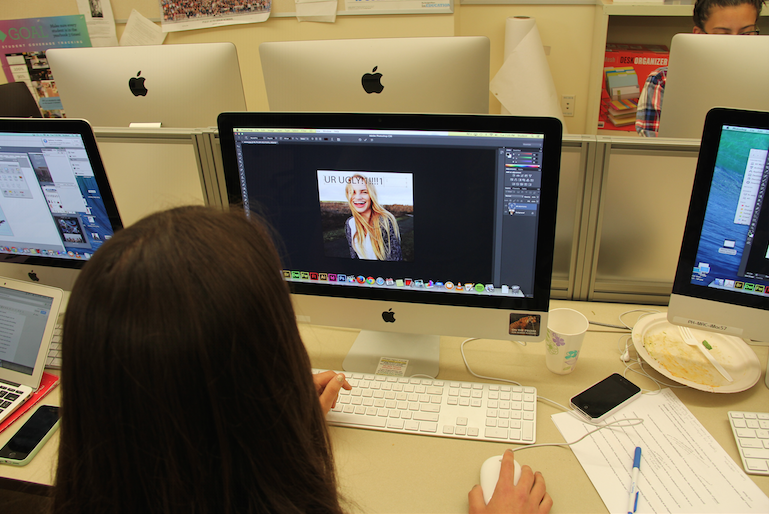 People try to hide their identity behind virtual personas to fit the norm, yet struggle to balance this with their true personality.

“Be real!” crowds of wise, thoughtful adults chant. “Embrace who you really are, and don’t be afraid to show it. That’s the only way you will create strong relationships and successfully boost your self-confidence. Never hide behind a façade.”

Almost certainly, every person has heard phrases like these more than once from adults, teachers and peers. Whenever people admit feeling insecure about their social interactions or reputations, they are reminded that being comfortable with themselves and open to others is paramount. Young children and adults alike have become conditioned to preach and believe these mantras.

Yet, people who share too much about their lives, most often through social media, are also harshly criticized by society. Those who post anything and everything, including their unfiltered thoughts on social or political issues, pictures of recent parties with underage drinking and smoking and snide comments that verge on the brink of cyberbullying, are admonished for revealing such unruly and unappealing sides of their characters.

In particular, if viewers include people who can hold any power over the course of a person’s life, including college admissions workers, job employers and gossiping students and parents, those who share raunchy or inflammatory aspects of their life are highly encouraged to feign complete innocence and utter kindliness — but only if it is virtual. In real time, people are told to let their personal traits and inner thoughts spill freely without any fake faces.

These conflicting standards pose a real identity crisis for individuals in society for two main reasons. First, people try to categorize virtual and real life as separate facets of life that should not intermingle, failing to realize that technology has become such an integral part of modern society and of people’s identities that it is impossible and utterly irrational to try to isolate the two. Second, they impose expectations to simultaneously conceal and reveal personality traits — two opposing actions. Since one’s virtual life is equally as important to his or her identity as one’s real-time interactions, how can people be expected to adhere to two self-conflicting standards of how to have ideal relationships and profiles on and offline, all at the same time?

The answer is simple; they can’t and should not be expected to be. Unfortunately, trying to choose only one of the two absolute methods is difficult because of the many benefits and drawbacks of both sharing and concealing personal information depending on the situation.

The idea that hiding behind fake profiles is harmful to people’s well-being and relationships holds some truth. Tiring and unsatisfying, constantly trying to hide behind a fake personality keeps a person from truly being able to live as him or herself because the walls surrounding the person create a deep rift in connection and understanding of intentions.
At the same time, though, revealing too much can make a person vulnerable to abuse by others. If a person posts something offensive, inappropriate or utterly private online, that mistake and shared idea stains his or her reputation and profile forever. The posts might not accurately reflect the person at every point in his or her life, but they are associated with the person nonetheless.

However, it is indeterminable whether hiding things from others is much better than revealing everything. When it comes to forming trust between people and having support in real life situations, keeping true feelings and thoughts private can often lead to miscommunication, loneliness and mistrust. People without outlets to release their thoughts and feelings will internalize their struggles and become devoured from the inside; the only way to prevent this detrimental effect is to be open in a supportive community full of people who are equally receptive, as well as accepting of that person’s openness.

The real question is not whether one method is always better than the other but rather when people should hide or reveal truths about themselves. Society confuses people and complicates their efforts to protect their reputations and relationships by constantly pushing for an inconsistent expectation, so society needs to decide at what times and under what circumstances hiding and revealing are appropriate.

People need to be more realistic and rational with the expectations that they decide to set for themselves, both by recognizing that their virtual life cannot be separated from their real life and that humans cannot fulfill two opposing characteristics simaltaneously.

In the end, people all want to protect themselves from harm and know how to best present themselves, and they will go to almost any extent to do so, whether it be hiding or sharing personal things. Let us help people define and follow their paths by providing a consistent and reasonable standard for when to and not to share personal truths.