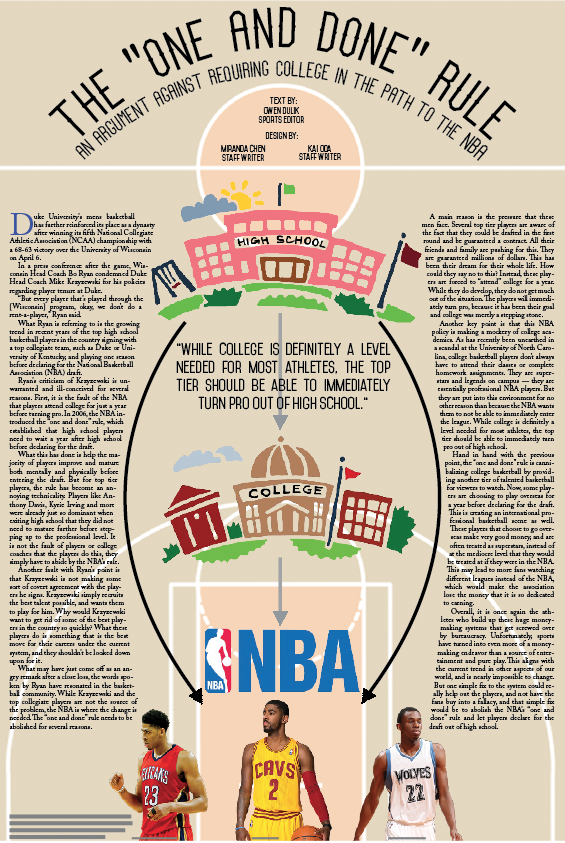 The “one and done” rule

Duke University’s mens basketball has further reinforced its place as a dynasty after winning its fifth National Collegiate Athletic Association (NCAA) championship with a 68-63 victory over the University of Wisconsin on April 6.
In a press conference after the game, Wisconsin Head Coach Bo Ryan condemned Duke Head Coach Mike Krzyzewski for his policies regarding player tenure at Duke.

“But every player that’s played through the [Wisconsin] program, okay, we don’t do a rent-a-player,” Ryan said.
What Ryan is referring to is the growing trend in recent years of the top high school basketball players in the country signing with a top collegiate team, such as Duke or University of Kentucky, and playing one season before declaring for the National Basketball Association (NBA) draft.

Ryan’s criticism of Krzyzewski is unwarranted and ill-conceived for several reasons. First, it is the fault of the NBA that players attend college for just a year before turning pro. In 2006, the NBA introduced the “one and done” rule, which established that high school players need to wait a year after high school before declaring for the draft.

What this has done is help the majority of players improve and mature both mentally and physically before entering the draft. But for top tier players, the rule has become an annoying technicality. Players like Anthony Davis, Kyrie Irving and more were already just so dominant when exiting high school that they did not need to mature further before stepping up to the professional level. It is not the fault of players or college coaches that the players do this, they simply have to abide by the NBA’s rule.

Another fault with Ryan’s point is that Krzyzewski is not making some sort of covert agreement with the players he signs. Krzyzewski simply recruits the best talent possible, and wants them to play for him. Why would Krzyzewski want to get rid of some of the best players in the country so quickly? What these players do is something that is the best move for their careers under the current system, and they shouldn’t be looked down upon for it.

What may have just come off as an angry remark after a close loss, the words spoken by Ryan have resonated in the basketball community. While Krzyzewski and the top collegiate players are not the source of the problem, the NBA is where the change is needed. The “one and done” rule needs to be abolished for several reasons.

A main reason is the pressure that these men face. Several top tier players are aware of the fact that they could be drafted in the first round and be guaranteed a contract. All their friends and family are pushing for this. They are guaranteed millions of dollars. This has been their dream for their whole life. How could they say no to this? Instead, these players are forced to “attend” college for a year. While they do develop, they do not get much out of the situation. The players will immediately turn pro, because it has been their goal and college was merely a stepping stone.

Another key point is that this NBA policy is making a mockery of college academics. As has recently been unearthed in a scandal at the University of North Carolina, college basketball players don’t always have to attend their classes or complete homework assignments. They are superstars and legends on campus — ­they are essentially professional NBA players. But they are put into this environment for no other reason than because the NBA wants them to not be able to immediately enter the league. While college is definitely a level needed for most athletes, the top tier should be able to immediately turn pro out of high school.

Hand in hand with the previous point, the “one and done” rule is cannibalizing college basketball by providing another tier of talented basketball for viewers to watch. Now, some players are choosing to play overseas for a year before declaring for the draft. This is creating an international professional basketball scene as well. These players that choose to go overseas make very good money, and are often treated as superstars, instead of at the mediocre level that they would be treated at if they were in the NBA. This may lead to more fans watching different leagues instead of the NBA, which would make the association lose the money that it is so dedicated to earning.

Overall, it is once again the athletes who build up these huge money-making systems that get screwed over by bureaucracy. Unfortunately, sports have turned into even more of a money-making endeavor than a source of entertainment and pure play. This aligns with the current trend in other aspects of our world, and is nearly impossible to change. But one simple fix to the system could really help out the players, and not have the fans buy into a fallacy, and that simple fix would be to abolish the NBA’s “one and done” rule and let players declare for the draft out of high school.