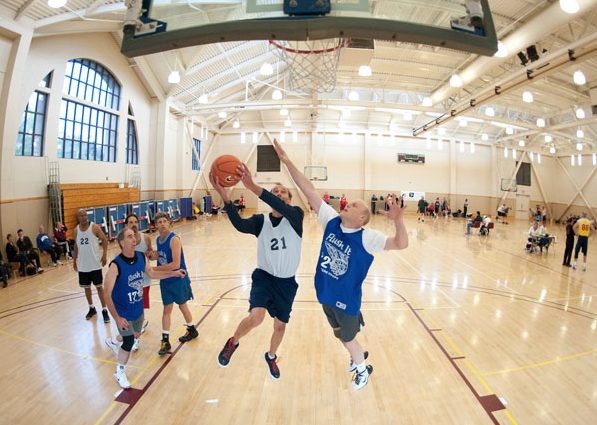 A senior athletes jumps to block a shot during the 2012 National Senior Games. Basketball is just one of the 19 events organized.

During the month of May, several local facilities in Palo Alto will partner to host a series of sports events as part of the ninth annual Bay Area Senior Games.

This year’s Senior Games are expected to expand on the success of the games of previous years. As of April 22, 1,300 athletes signed up to participate in the 19 events offered, ranging from typical sports such as basketball to unique competitions such as pickleball. Some recent additions to the games include water polo, lawn bowling and soccer, which were tested in the 2009 National Senior Games and have been fully implemented recently due to high demand.

The Bay Area Senior Games look to involve the community by utilizing local facilities and relying on volunteers. Lawn bowling, volleyball and raquetball will take place in Palo Alto community centers such as Cubberley gym and the Palo Alto Elks Club, while water polo, swimming and soccer will be held at Stanford University facilities. The Bay Area Senior Games have had a longstanding partnership with Stanford since it hosted the majority of the events in the 2009 National Senior Games.

“We are very happy to continue to host the Bay Area Senior Games as part of Stanford Athletics’ support of the senior community and senior athletes,” Ray Purpur, Stanford’s deputy athletic director, said in a press release. “This event encourages Californians over 50 to keep fit and live healthy, a message the University wholeheartedly supports.”

The Bay Area Senior Games is a continuation of the National Senior Games, which were held in 2009 in Palo Alto. Following more informal test events as early as 2006, the 2009 event drew over 10,000 athletes from 18 sports. Due to the popularity of the National Senior Games, the Bay Area Sports Organizing Committee has helped facilitate a regional competition for future years. Athletes who participate in the regional games have the opportunity to qualify for the national games, which will be held this summer in Minnesota. The Bay Area chapter is one of the six regional chapters offered in California.

“We are delighted to be able to continue the tradition of the Bay Area Senior Games [which are] now in [their] ninth year,” Cribbs said. “These men and women are shining examples of the benefits of an active, competitive lifestyle that embraces vitality and exemplifies our slogan – ‘Long Live the Challenge.’”