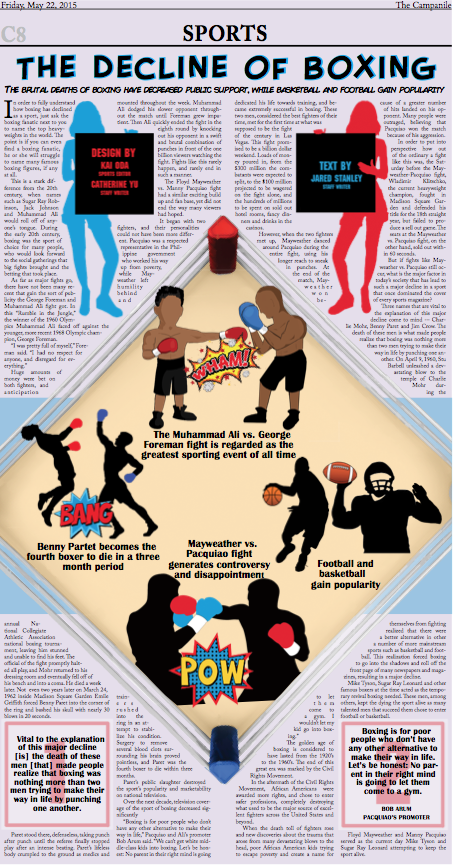 The Decline of Boxing

In order to fully understand how boxing has declined as a sport, just ask the boxing fanatic next to you to name the top heavyweights in the world. The point is if you can even find a boxing fanatic, he or she will struggle to name many famous boxing figures, if any at all.

This is a stark difference from the 20th century, when names such as Sugar Ray Robinson, Jack Johnson and Muhammad Ali would roll off of anyone’s tongue. During the early 20th century, boxing was the sport of choice for many people, who would look forward to the social gatherings that big fights brought and the betting that took place.

As far as major fights go, there have not been many recent that gain the sort of publicity the George Foreman and Muhammad Ali fight got. In this “Rumble in the Jungle,” the winner of the 1960 Olympics Muhammad Ali faced off against the younger, more recent 1968 Olympic champion, George Foreman.

“I was pretty full of myself,” Foreman said. “I had no respect for anyone, and disregard for everything.”

Huge amounts of money were bet on both fighters,  and anticipation mounted throughout the week. Muhammad Ali dodged his slower opponent throughout the match until Foreman grew impatient. Then Ali quickly ended the fight in the eighth round by knocking out his opponent in a swift and brutal combination of punches in front of the one billion viewers watching the fight. Fights like this rarely happen, and rarely end in such a manner.

The Floyd Mayweather vs. Manny Pacquiao fight had a similar exciting build up and fan base, yet did not end the way many viewers had hoped.

It began with two fighters, and their personalities could not have been more different. Pacquiao was a respected representative in the Philippine government who worked his way up from poverty, while Mayweather left humility behind and dedicated his life towards training, and became extremely successful in boxing. These two men, considered the best fighters of their time, met for the first time at what was supposed to be the fight of the century in Las Vegas. This fight promised to be a billion dollar weekend. Loads of money poured in, from the $300 million the combatants were expected to split, to the $100 million projected to be wagered on the fight alone, and the hundreds of millions to be spent on sold out hotel rooms, fancy dinners and drinks in the casinos.

However, when the two fighters met up,  Mayweather danced around Pacquiao during the entire fight, using his longer reach to sneak in punches. At the end of the match, Mayweather won because of a greater number of hits landed on his opponent. Many people were outraged, believing that Pacquiao won the match because of his aggression.

In order to put into perspective how out of the ordinary a fight like this was, the Saturday before the Mayweather-Pacquiao fight, Wladimir Klitschko, the current heavyweight champion, fought in Madison Square Garden and defended his title for the 18th straight year, but failed to produce a sell out game. The seats at the Mayweather vs. Pacquiao fight, on the other hand, sold out within 60 seconds.

But if fights like Mayweather vs. Pacquiao still occur, what is the major factor in today’s society that has lead to such a major decline in a sport that once dominated the cover of every sports magazine?

Three names that are vital to the explanation of this major decline come to mind -– Charlie Mohr, Benny Paret and Jim Crow. The death of these men is what made people realize that boxing was nothing more than two men trying to make their way in life by punching one another. On April 9, 1960, Stu Barbell unleashed a devastating blow to the temple of Charlie Mohr during the annual National Collegiate Athletic Association national boxing tournament, leaving him stunned and unable to find his feet. The official of the fight promptly halted all play, and Mohr returned to his dressing room and eventually fell off of his bench and into a coma. He died a week later. Not  even two years later on March 24, 1962 inside Madison Square Garden Emile Griffith forced Benny Paret into the corner of the ring and bashed his skull with nearly 30 blows in 20 seconds.

Paret stood there, defenseless, taking punch after punch until the referee finally stopped play after an intense beating. Paret’s lifeless body crumpled to the ground as medics and trainers rushed into the ring in an attempt to stabilize his condition. Surgery to remove several blood clots surrounding his brain proved pointless, and Paret was the fourth boxer to die within three months.

Over the next decade, television coverage of the sport of boxing decreased significantly

“Boxing is for poor people who don’t have any other alternative to make their way in life,” Pacquiao and Ali’s promoter Bob Arum said. “We can’t get white middle-class kids into boxing. Let’s be honest: No parent in their right mind is going to let them come to a gym. I wouldn’t let my kid go into boxing.”

The golden age of boxing is considered to have lasted from the 1920’s to the 1960’s. The end of this great era was marked by the Civil Rights Movement.

In the aftermath of the Civil Rights Movement,  African Americans  were awarded more rights, and chose to enter safer professions, completely destroying what used to be the major source of excellent fighters across the United States and beyond.

When the death toll of fighters rose and new discoveries about the trauma that arose from many devastating blows to the head, poor African American kids trying to escape poverty and create a name for themselves from fighting realized that there were a better alternative in other a number of more mainstream sports such as basketball and football. This realization forced boxing to go into the shadows and roll off the front page of many newspapers and magazines, resulting in a major decline.

Mike Tyson, Sugar Ray Leonard and other famous boxers at the time acted as the temporary revival boxing needed. These men, among others, kept the dying the sport alive as many talented men that succeed them chose to enter football or basketball.