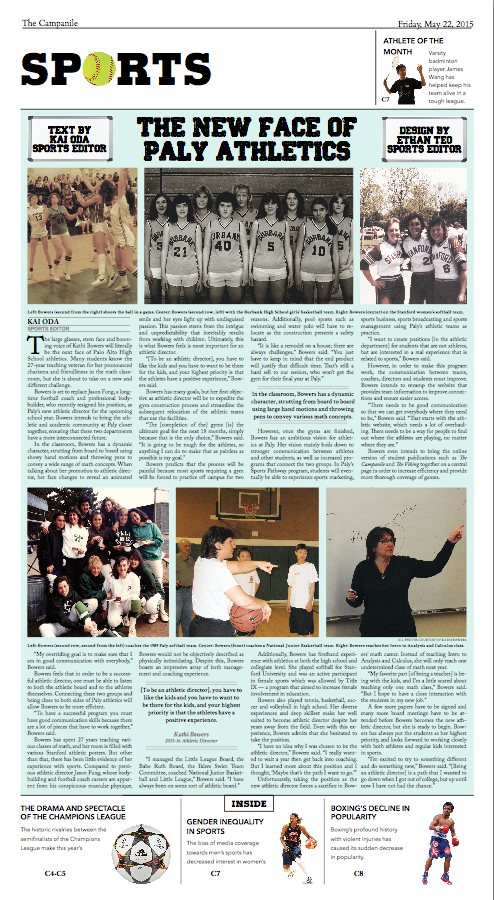 The new face of Paly athletics

The large glasses, stern face and booming voice of Kathi Bowers will literally be the next face of Palo Alto High School athletics. Many students know the 27-year teaching veteran for her pronounced charisma and friendliness in the math classroom, but she is about to take on a new and different challenge.

Bowers is set to replace Jason Fung, a long-time football coach and professional bodybuilder, who recently resigned his position, as Paly’s new athletic director for the upcoming school year. Bowers intends to bring the athletic and academic community at Paly closer together, ensuring that these two departments have a more interconnected future.

In the classroom, Bowers has a dynamic character, strutting from board to board using showy hand motions and throwing pens to convey a wide range of math concepts. When talking about her promotion to athletic director, her face changes to reveal an animated smile and her eyes light up with undisguised passion. This passion stems from the intrigue and unpredictability that inevitably results from working with children. Ultimately, this is what Bowers feels is most important for an athletic director.

“[To be an athletic director], you have to like the kids and you have to want to be there for the kids, and your highest priority is that the athletes have a positive experience,” Bowers said.

Bowers has many goals, but her first objective as athletic director will be to expedite the gym construction process and streamline the subsequent relocation of the athletic teams that use the facilities.

“The [completion of the] gyms [is] the ultimate goal for the next 18 months, simply because that is the only choice,” Bowers said. “It is going to be tough for the athletes, so anything I can do to make that as painless as possible is my goal.”

Bowers predicts that the process will be painful because most sports requiring a gym will be forced to practice off campus for two seasons. Additionally, pool sports such as swimming and water polo will have to relocate as the construction presents a safety hazard.

“It is like a remodel on a house; there are always challenges,” Bowers said. “You just have to keep in mind that the end product will justify that difficult time. That’s still a hard sell to our seniors, who won’t get the gym for their final year at Paly.”

However, once the gyms are finished, Bowers has an ambitious vision for athletics at Paly. Her vision mainly boils down to stronger communication between athletes and other students, as well as increased programs that connect the two groups. In Paly’s Sports Pathway program, students will eventually be able to experience sports marketing, sports business, sports broadcasting and sports management using Paly’s athletic teams as practice.

“I want to create positions [in the athletic department] for students that are not athletes, but are interested in a real experience that is related to sports,” Bowers said.

However, in order to make this program work, the communication between teams, coaches, directors and students must improve. Bowers intends to revamp the website that provides team information to improve connections and ensure easier access.

Bowers even intends to bring the online version of student publications such as The Campanile and The Viking together on a central page in order to increase efficiency and provide more thorough coverage of games.

“My overriding goal is to make sure that I am in good communication with everybody,” Bowers said.

Bowers feels that in order to be a successful athletic director, one must be able to listen to both the athletic board and to the athletes themselves. Connecting these two groups and being close to both sides of Paly athletics will allow Bowers to be more efficient.

“To have a successful program you must have good communication skills because there are a lot of pieces that have to work together,” Bowers said.

Bowers has spent 27 years teaching various classes of math, and her room is filled with various Stanford athletic posters. But other than that, there has been little evidence of her experience with sports. Compared to previous athletic director Jason Fung, whose bodybuilding and football coach careers are apparent from his conspicuous muscular physique, Bowers would not be objectively described as physically intimidating. Despite this, Bowers boasts an impressive array of both management and coaching experience.

“I managed the Little League Board, the Babe Ruth Board, the Iklers Swim Team Committee, coached National Junior Basketball and Little League,” Bowers said. “I have always been on some sort of athletic board.”

Additionally, Bowers has firsthand experience with athletics at both the high school and collegiate level. She played softball for Stanford University and was an active participant in female sports which was allowed by Title IX — a program that aimed to increase female involvement in education.

Bowers also played tennis, basketball, soccer and volleyball in high school. Her diverse experiences and deep skillset make her well suited to become athletic director despite her years away from the field. Even with this experience, Bowers admits that she hesitated to take the position.

“I have no idea why I was chosen to be the athletic director,” Bowers said. “I really wanted to wait a year then get back into coaching. But I learned more about this position and I thought, ‘Maybe that’s the path I want to go.’”

Unfortunately, taking the position as the new athletic director forces a sacrifice in Bowers’ math career. Instead of teaching Intro to Analysis and Calculus, she will only teach one undetermined class of math next year.

“My favorite part [of being a teacher] is being with the kids, and I’m a little scared about teaching only one math class,” Bowers said. “But I hope to have a close interaction with the students in my new job.”

A few more papers have to be signed and many more board meetings have to be attended before Bowers becomes the new athletic director, but she is ready to begin. Bowers has always put the students as her highest priority, and looks forward to working closely with both athletes and regular kids interested in sports.

“I’m excited to try to something different and do something new,” Bowers said. “[Being an athletic director] is a path that I wanted to go down when I got out of college, but up until now I have not had the chance.”