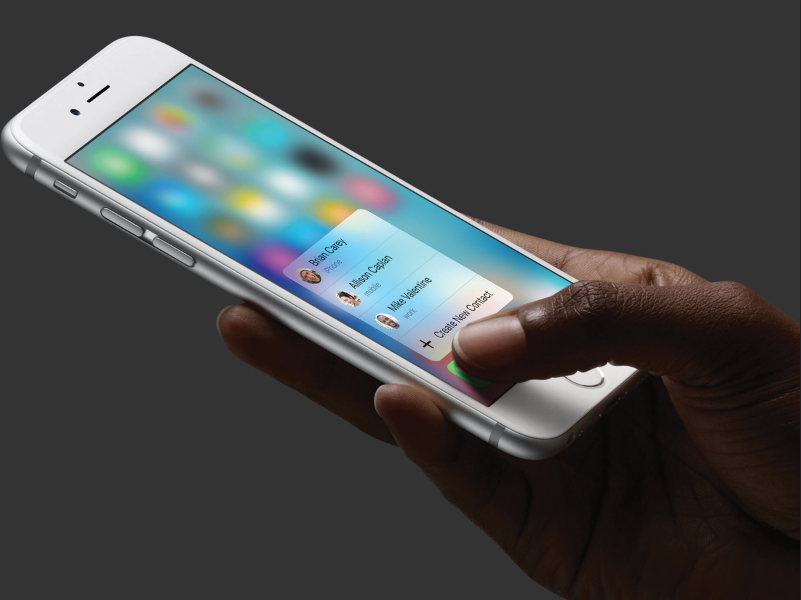 Apple implemented Quick Action on the iPhone 6s and 6s Plus, a new feature that gives users shortcuts to application functions.

On June 29, 2007, Apple reinvented the phone. They introduced to the world a phone that provided multi-touch capabilities, allowed users internet access and contained a plethora of other functions that a normal phone could not perform. Fast forward eight years later and according to Apple, “the only thing that’s changed is everything.”

On Sept. 9, 2015, Apple introduced the iPhone 6s and 6s Plus in San Francisco. Apple implemented a multitude of new features in the iPhone 6s and 6s Plus that separate themselves from the first generation iPhone. Features such as a multi-touch system, a new camera and enhancements to the award-winning design of the phone are among the factors that will enamor Apple iPhone fanatics into buying its newest product.

The most important and most notable feature that Apple implemented was the introduction of the 3-D Touch system. Apple went on to implement the same functionality that is used on the trackpad on its new MacBook and 13-inch MacBook Pro to the iPhone 6s and 6s Plus. The 3-D touch system allows users to “peek” or “pop” in order to more efficiently use the applications they would like to use. With a light press on the screen, a “peek” allows users to peek into an app through a small bubble of information without having to go through the hassle of waiting to boot up the application. With a stronger touch, a “pop” opens up a bubble that contains more information that fills up half of the screen without actually having to boot up the application.

Another function that the 3-D Touch system contains is the Quick Action feature. The feature works by pressing on the icon of an application and dragging down a list of options to a specified function. For example, if one would like to take a selfie on the camera application, rather than having to press the application, wait for it boot up and swipe left in order to use the front-facing camera, one can immediately take a selfie by pressing on the icon and dragging down to “Take Selfie.” More minor features that come with the 3-D Touch system include pressing on the left side of the home screen to seamlessly transition between applications and changing the thickness of drawing lines depending on how hard one presses on the screen.

Besides the implementation of the 3-D Touch system, another major update would be that the iPhone 6s gained is a new camera. For the past four years, the iPhone’s camera has remained static with the same iSight 8-megapixel camera. Apple bumped the back-facing camera from eight megapixels to 12 megapixels and the front-facing camera from 1.2 megapixels to five megapixels. Improved local tone, optical image stabilization and faster image processing were added as well.

“Live Photos” (essentially GIFs) is a new feature that allows image stills to move when the user presses on the screen. Though “Live Photos” is an automatic feature, it takes more storage space and the frame rate is lower than that of an actual video.  Apple has also implemented a front-facing camera flash, though not in the way that one would expect it. Rather than installing a camera flash on the front like the iPhone has on the back facing camera, Apple took advantage of the iPhone 6s and 6s Plus’s new LED screen by allowing the entire screen to flash. These upgrades and new features not only improved the picture aspect of the iPhone camera improved, but the video aspect as well

In terms of aesthetics, the body of the iPhone 6s and 6s Plus looks strikingly similar to its predecessor; however, the body actually contains a slightly thicker and heavier chassis and has a stronger aluminum body and glass screen. The body is slightly thicker in order to fit four layers to allow the full functionality of the 3-D Touch system.

Not only did Apple implement this new 4-layer screen system, but it also replaced the type of aluminum that the iPhone 6 was composed of. A few incidents that took the web by storm last year contained images of the iPhone 6’s slim and fragile aluminum chassis victim to unintentional bending and breaking. Apple took note of these incidents and implemented Series 7000 aluminum, the same type of aluminum used in the aerospace industry.

The iPhone 6s and 6s Plus also  contain performance enhancements. Both models are powered by the 64-bit A9 core chip. Apple boasts that the A9 core chip’s central processing unit is 70 percent faster and its graphical processing unit is 90 percent faster than last years A8 core chip. Inside the core chip contains the M9 chip, a motion coprocessor that permits the iPhone to connect to the accelerometer, compass, gyroscope and barometer for application use. The M9 chip is integral for users to say “Hey Siri” when the phone is asleep,  rather than having to hold onto the home button to activate Siri.

Although Apple did not implement a massive overhaul on the iPhone 6s and 6s Plus, it was still able to make one of 2014’s best smartphones even better.