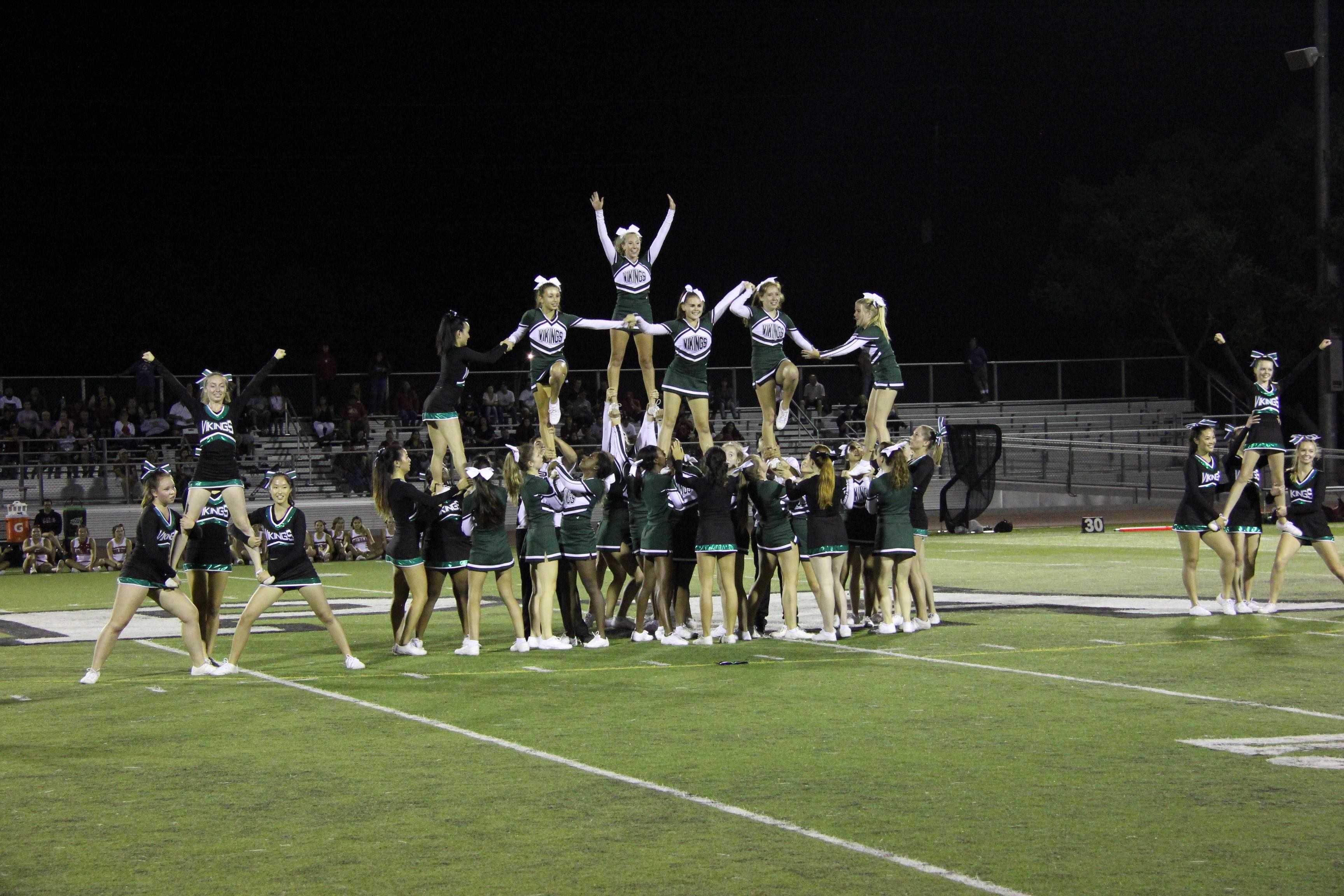 The Paly spirit squad, comprised of both cheer and dance, performs during halftime at the Paly football game against San Benito.

Palo Alto High School’s cheerleading coach, Hilary McDaniels, has implemented a new system in which the cheerleaders will cheer for the majority of sports, in hopes of getting the student body excited about sports that are not typically publicized. With cheerleaders attending more sports events, tthe urn-out of the general public is also expected to increase.

“It’s an effort to spread spirit further by doing our best to attend ideally at least one game for every sport,” McDaniels said. “But as cheerleaders, typically, it’s reasonable for them to go to games where there are more people because they’re supposed to lead the crowd, and not be the crowd.”
In the past, cheerleaders have only cheered for sports that gain more student attendance, such as football and basketball. But many team members have also wanted to cheer for other sports, and are supportive of the new policy. The rule was enforced in the spring — the cheerleaders already cheered for a lacrosse game last season, when McDaniels first began coaching.
Cheer captain Ella Higashi notes that this system of cheering more more sports is something that the cheer team has wanted for a while, and is finally being implemented.

“It’s different than it has been in the past, but it’s kind of, in a way, always been like that,” Higashi said. “Our previous coach had always encouraged us to go to big games like waterpolo and volleyball, but she never made it actually happen.”
The new policy was created to help spread spirit further, and McDaniels would like to support more of the school.
“School spirit should be spread across the entire campus, and we want to support a larger audience rather than just football and basketball,” McDaniels said.

Cheerleader Alice Saparov is in favor of spreading school spirit to other sports.

“I think it’s really nice that we’re cheering for the other sports at Paly, as well, and not just football and basketball,” Saparov said.

Although the majority of the cheer team is supportive of the new policy, some student athletes dislike the idea.

“As much as [the tennis team] would love the support, extra noise would distract us,” junior Avery Pearson said. “Also, the courts are kind of spread out, so it would be hard for the cheerleaders to be in one central place to cheer for everyone.”

The cheerleaders will not cheer at all sports games. Instead, they plan to attempt to go to one or two of the most important games of the season. Coaches have been emailing McDaniels, telling her the best games for the cheer team to cheer at.

“Basketball and football are the main seasons that we cheer at, but the other sports, if they have a really big game that a lot of the students and parents will go to, then we’ll also attend that,” Higashi said. “We’re going to try to make all the big games that are happening in each sport.”
Some sports such as cross country and golf will be more difficult to cheer for because they are constantly moving. Unless specifically asked by the coaches, they will not be cheering for those sports.

Although the cheer team wants to attend all the major games for each sport, some sports make it hard because they are so different.
However, the cheerleaders will try to utilize other strategies to build up school spirit and show support for all of the sports. Saparov presumes that if the cheer team cannot cheer for a particular sport, they will find other ways to show their support.

“There are other ways to show support for the teams, not that we have to be there specifically cheering for them, but also making posters or making little treats or baskets,” Saparov said.

The prescence of cheer will boost publicity of sports that do not currently receive a lot of attention. The cheerleaders’ main goal is to spread school spirit, get everyone excited about Paly sports. Hopefully, this new system will allow the cheer team to accomplish all of those goals.