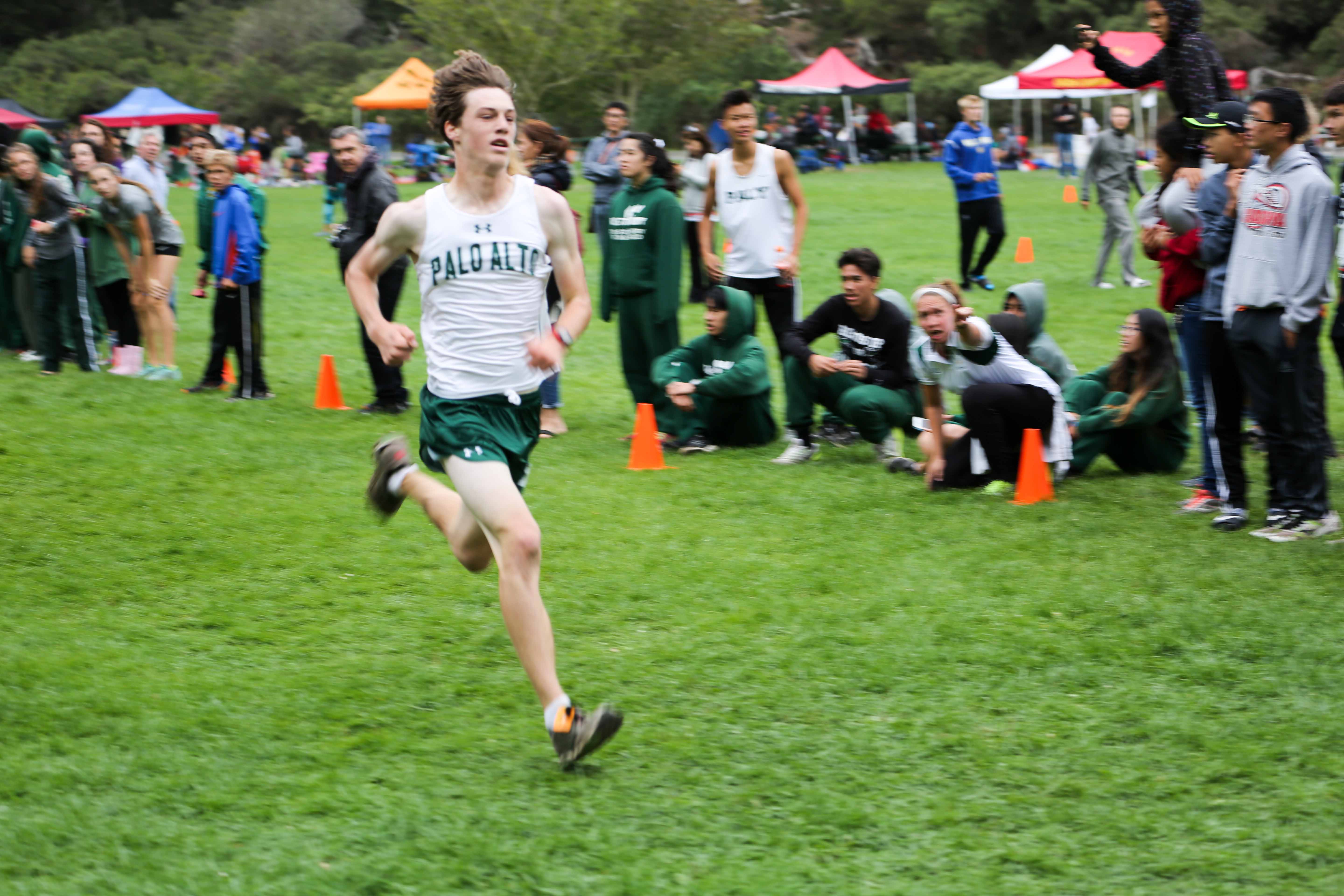 Junior Kent Slaney crosses the finish line in a cross country meet on September 12. The boys team placed first overall while the girls team placed fifth out of 18 teams.

“If we want to win CCS [Central Coast Section] I think the key is just to stay healthy,” boys team captain, senior Samuel Desré said. “If we don’t have injuries and have five good runners then we can beat Bellarmine, our main opponent this year.”

The girls team has similar ambitions.

“We are looking to get in second place or higher because that will send us to the state meet,” girls team captain, senior Portia Barrientos said.

“We have a really big team this year, and we can’t take everyone to the meets, and it still gives people the chance to improve so I think it’s for the best,” boys team captain, junior Naveen Pai said.

The teams were chosen through carrying out time trials, and those who made the practice team still have the opportunity to make it on to the travel team.

[pullquote speaker=” Samuel Désre, Senior Team Captain” photo=”” align=”right” background=”on” border=”all” shadow=”on”]If we want to win CCS I think the key is just to stay healthy. If we don’t have injuries and have five good runners then we can beat Bellarmine, our main opponent this year.[/pullquote]

The boys team is also looking forward to some help from underclassmen talent this year.

“We’ve got Henry Saul, he’s a JO [Junior Olympian] for track,” junior Spencer Morgenfeld said. “He’s pretty good, so he should make varsity this year even though he’s a freshman … we’ve also got a couple of really good sophomores as well like Reed [Foster] and Sam Craig.”

The girls team also has been hoping for some young talent this year.

“We have a couple fast freshmen  ­— Maya Wilson, Katia Martha and Julie Meng, and we have some returning sophomores that I know are going to make big contributions to the team this year,” Barrientos said.

The boys team is also relying on a strong upperclassman backbone.

“We got a really strong junior class this year with Kent Slaney, Naveen, myself and Kai [Oda],” Morgenfeld said.

The boys team got first place overall in the Lowell meet on Sept. 12, putting them one step closer to achieving their goal. The girls team placed fifth out of 18 teams at the Lowell meet.

“Considering that our two best runners are out due to injuries, that’s not too bad, but it’s obvious that we still have a lot of work to do,” Barrientos said.

The girls team will also be attending the upcoming Stanford Invitational on Sept. 19, but there will be very tough competition.

“This meet attracts some of the strongest teams in the entire nation, so I don’t think that we can finish in fifth like we did last year,” Barrientos said.

Despite the lack of upperclassmen, the boys team has an optimistic outlook for the Stanford meet.

“It is a big varsity invite and it is a great opportunity to prove ourselves as a team.” Pai said. “I think we will score well as a team and we might end up with some good individual results that will give us confidence for the rest of the season.”