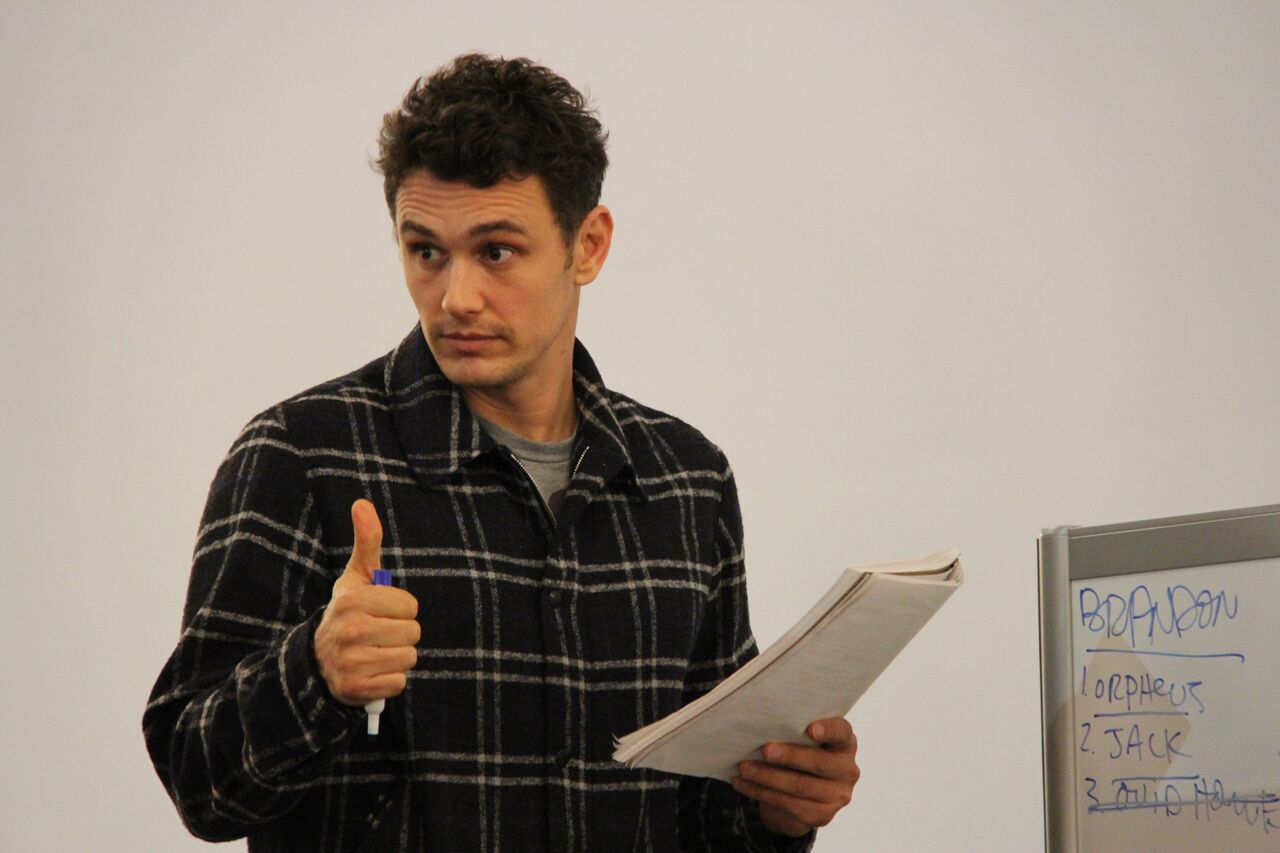 Palo Alto High School alumnus James Franco began the first out of eight film workshops for 40 local high school students on Sept. 13 held in the Media Arts Center. Throughout the course of the workshops, which meet once a month, students will be working in small groups to film, edit and direct scenes that will eventually become a feature film.

Franco has been teaching film courses at University of Southern California (USC), University of Los Angeles (UCLA) and California Institute of the Arts (CalArts) at the graduate level for over six years. However, much like the courses he teaches at the graduate level, many film classes are limited to those who already have proficient experience in filmmaking —  there are very limited chances students who are not necessarily committed to filmmaking to take film courses. Feeling his opportunities for filmmaking were limited in high school and even in college, Franco decided to create a workshop similar to his classes offered at the graduate level for high schoolers who are interested in filmmaking.

“When I was younger, when I was here at Paly, when I was at UCLA, all these programs, like film writing programs or creative writing programs, all required some sort of audition or application process or they weren’t available,” Franco said.  “When I was at Paly we had nothing like this. I always felt like I was on the outside and there where all these things I wanted to do but I didn’t have access to. So now that I have been making movies for almost 20 years, I want to give opportunities to other people and give the opportunities I would have wanted at that age.”

However, Franco envisions that teaching a course to high school students may present some different challenges as opposed to the ones he faced whilst teaching more experienced graduate students. To make up for the potential lack of experience, this course will focus more on the technical side of movie making. Nonetheless, Franco intends to keep the core of his teaching style the same. Franco advocates for project-based learning, where students work towards an end assignment or goal that is applicable to the real world.

“One of the things I try to do as a teacher is I always make my classes project based. We always make a movie, in my graduate classes and here,” Franco said. “I bring in the the material and I try to bring in material that the class can handle. Here, I brought in my mom’s [Betsy Franco] novel, Metamorphosis, that is about teens in high school. The book was inspired by Paly, and it is material that these students are very equipped to engage with and handle.”

Currently, the workshop is working on rewriting Besty’s original script in order for small groups to be able to direct different sections of it. Franco’s enlisted Iris Torres, a producer of his film company, Studio Four, to facilitate the workshops.

“We divided the script into eight different episodes — so we are creating the outline for each episode,” Torres said. “Once we get the script 100 percent locked, then we will move into [casting, animation] and how the film is going to look in terms of photography. There is a lot to do.”

When the workshop was initially publicized without Franco’s name, it received a minimal amount of applicants. On Sept. 4 Franco posted a selfie on his Instagram account announcing that he would be teaching an eight part film class for high school students.

“No one was signing up when [the course] was taught by a ‘mysterious celebrity’ so I wanted some students,” Franco said. “Fortunately, I have a fair [amount of] followers on Instagram and news outlets pick up things that I post and I knew if I put it out there it would get some attention.”

After Franco’s announcement of the course, over 500 high school students around the Bay Area applied for 40 spots in the program. Initially, it was planned that only 24 students were going to be accepted, however, the workshop was expanded due to high demand. Applicants were asked to submit a brief essay describing their interest in filmmaking and a short video shot on a smartphone.

Senior Dylan Griffith, a students who is participating in the workshop, admires Franco’s laid back teaching style that allows students to feel comfortable.

“In terms of his teaching style, I really like how [Franco] approaches things and communicates with a colloquial tone,” Griffith said. “You don’t feel intimidated with this big celebrity or actor, because he talks like most people would talk amongst their friends. It gives a very comfortable setting.”

This workshop can serve as a bridge for students interested in the film industry, which can be hard to break into, as opportunities to work with experienced professionals can be scarce. For those in the film industry, it is easy to get caught up in thinking about what is next and how filmmakers are going to enhance their careers. But for Franco, teaching courses like this allows him to take a step back from from the film industry and focus on enhancing others’ skills.

“If you are in the film industry or a highly competitive industry where it is hard to break into, you spend a lot of time focusing on yourself,” Franco said. “You have to raise yourself to a certain level or you do not have a chance. If you do make it or you do have a career in film or whatever, you get to a point where it is like, ‘all I do is focus on myself or focus on my career.’ I got to a point in my career where I made enough movies that I was proud of where it was like, ‘I made this thing, but what’s next?’ By teaching universities and here, it is great for me because it gets my mind off of myself and takes me out of that self-centered careerist attitude.”