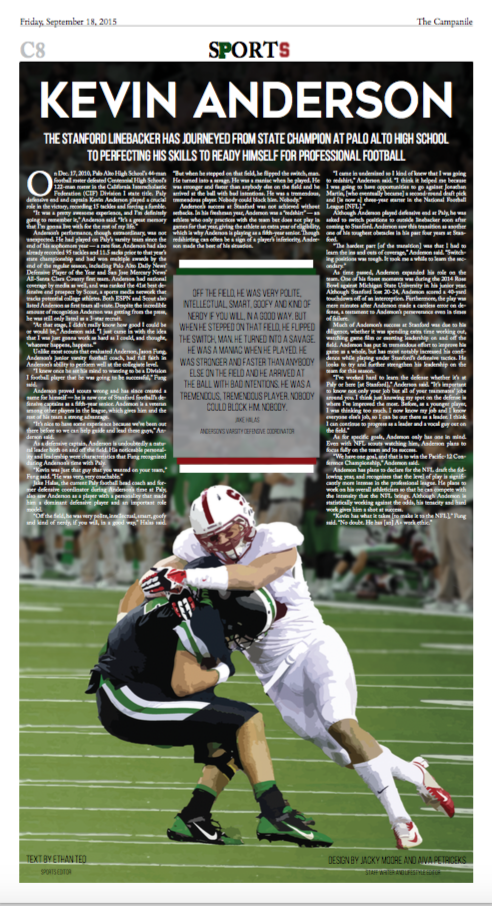 “It was a pretty awesome experience, and I’m definitely going to remember it,” Anderson said. “It’s a great memory that I’m gonna live with for the rest of my life.”

Anderson’s performance, though extraordinary, was not unexpected. He had played on Paly’s varsity team since the end of his sophomore year — a rare feat. Anderson had also already recorded 95 tackles and 11.5 sacks prior to that year’s state championship and had won multiple awards by the end of the regular season, including Palo Alto Daily News’ Defensive Player of the Year and San Jose Mercury News’ All-Santa Clara County first team. Anderson had national coverage by media as well, and was ranked the 41st best defensive end prospect by Scout, a sports media network that tracks potential college athletes. Both ESPN and Scout also listed Anderson as first team all-state. Despite the incredible amount of recognition Anderson was getting from the press, he was still only listed as a 3-star recruit.

“At that stage, I didn’t really know how good I could be or would be,” Anderson said. “I just came in with the idea that I was just gonna work as hard as I could, and thought, ‘whatever happens, happens.’”

Unlike most scouts that evaluated Anderson, Jason Fung, Anderson’s junior varsity football coach, had full faith in Anderson’s ability to perform well at the collegiate level.
“I knew once he set his mind to wanting to be a Division I football player that he was going to be successful,” Fung said.

Anderson proved scouts wrong and has since created a name for himself — he is now one of Stanford football’s defensive captains as a fifth-year senior. Anderson is a veteran among other players in the league, which gives him and the rest of his team a strong advantage.

“It’s nice to have some experience because we’ve been out there before so we can help guide and lead these guys,” Anderson said.

As a defensive captain, Anderson is undoubtedly a natural leader both on and off the field. His noticeable personality and leadership were characteristics that Fung recognized during Anderson’s time with Paly.

“Kevin was just that guy that you wanted on your team,” Fung said. “He was very, very coachable.”

Jake Halas, the current Paly football head coach and former defensive coordinator during Anderson’s time at Paly, also saw Anderson as a player with a personality that made him a dominant defensive player and an important role model.

“Off the field, he was very polite, intellectual, smart, goofy and kind of nerdy, if you will, in a good way,” Halas said. “But when he stepped on that field, he flipped the switch, man. He turned into a savage. He was a maniac when he played. He was stronger and faster than anybody else on the field and he arrived at the ball with bad intentions. He was a tremendous, tremendous player. Nobody could block him. Nobody.”

Anderson’s success at Stanford was not achieved without setbacks. In his freshman year, Anderson was a “redshirt” — an athlete who only practices with the team but does not play in games for that year, giving the athlete an extra year of eligibility, which is why Anderson is playing as a fifth-year senior. Though redshirting can often be a sign of a player’s inferiority, Anderson made the best of his situation.

“I came in undersized so I kind of knew that I was going to redshirt,” Anderson said. “I think it helped me because I was going to have opportunities to go against Jonathan Martin, [who eventually became] a second-round draft pick and [is now a] three-year starter in the National Football League [NFL].”

Although Anderson played defensive end at Paly, he was asked to switch positions to outside linebacker soon after coming to Stanford. Anderson saw this transition as another one of his toughest obstacles in his past four years at Stanford.

“The hardest part [of the transition] was that I had to learn the ins and outs of coverage,” Anderson said. “Switching positions was tough. It took me a while to learn the secondary.”

As time passed, Anderson expanded his role on the team. One of his finest moments was during the 2014 Rose Bowl against Michigan State University in his junior year. Although Stanford lost 20-24, Anderson scored a 40-yard touchdown off of an interception. Furthermore, the play was mere minutes after Anderson made a careless error on defense, a testament to Anderson’s perseverance even in times of failure.

Much of Anderson’s success at Stanford was due to his diligence, whether it was spending extra time working out, watching game film or exerting leadership on and off the field. Anderson has put in tremendous effort to improve his game as a whole, but has most notably increased his confidence while playing under Stanford’s defensive tactics. He looks to try and further strengthen his leadership on the team for this season.

“I’ve worked hard to learn the defense whether it’s at Paly or here [at Stanford],” Anderson said. “It’s important to know not only your job but all of your teammates’ jobs around you. I think just knowing my spot on the defense is where I’ve improved the most. Before, as a younger player, I was thinking too much. I now know my job and I know everyone else’s job, so I can be out there as a leader. I think I can continue to progress as a leader and a vocal guy out on the field.”

As for specific goals, Anderson only has one in mind. Even with NFL scouts watching him, Anderson plans to focus fully on the team and its success.

“We have one goal, and that is to win the Pacific-12 Conference Championship,” Anderson said.

Anderson has plans to declare for the NFL draft the following year, and recognizes that the level of play is significantly more intense in the professional league. He plans to work on his overall athleticism so that he can compete with the intensity that the NFL brings. Although Anderson is statistically working against the odds, his tenacity and hard work gives him a shot at success.