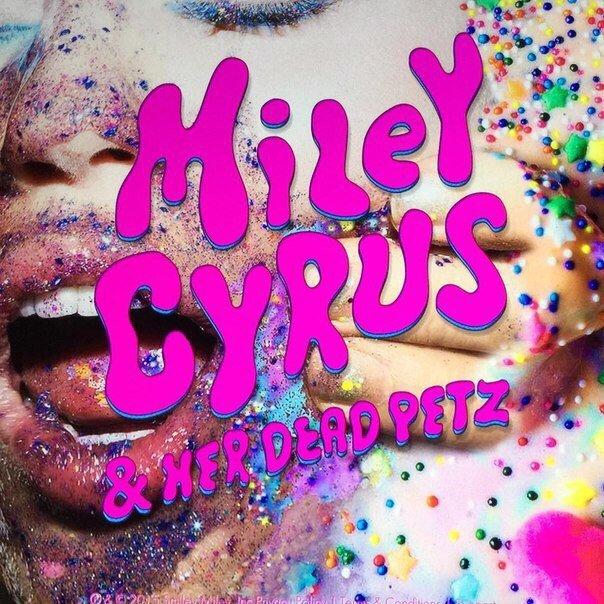 Miley, what’s good? On Aug. 30, between hosting the MTV Video Music Awards (VMAs) and dealing with some beef from fellow singer Nicki Minaj, pop princess Miley Cyrus announced the release of a surprise album, entitled “Miley Cyrus & Her Dead Petz.” The album debuted after the show aired and is available for free online.

Just from the title, one can infer that the album features many unique lyrics and inspirations behind said lyrics. “Unique” is not used lightly when talking about Cyrus — the crazy, provocative, statement-making Pasties’ queen.

Senior Portia Barrientos was definitely thrown by the title.

Cyrus seems to be making a shift away from pop music and transitioning into, well, no one is quite sure just what it is yet. But the album certainly does contain plenty of muses about life and loss, loved ones, aliens and yes, her many dead pets. The album has 23 tracks and features collaborations with Big Sean, Ariel Pink, producer Mike WiLL Made-It and alternative rock band The Flaming Lips.

“I used to idolize her in her Hannah Montana days but, well, let’s just say it’s gone downhill from there,” Danie said regarding Miley’s new album.

While this album does reference a lover affectionately named “space dude,” her dead blowfish and the Tibetan Book of the Dead, it does not focus on wild pop songs as her recent erratic shenanigans and last year’s raunchy album “Bangerz” may have predicted, although there are still a few in there.

Instead, with ballads like “Karen Don’t Be Sad,” “Milky Milky Milk,” and “Slab Of Butter,” the album is a foray into psychedelic reflection and an outpouring of heartfelt emotions. The songs feature Cyrus crooning to The Flaming Lips’ ethereal keyboards, most of the tracks topping four or five minutes in length. Each one is a glance into Cyrus that the public has never seen before, or possibly didn’t even know existed –– her emotional, creative side, that no one really tends to see past due to her obnoxious partying nature.

To give a taste of the album, two stand-out songs include “Miley Tibetan Bowlzzz,” and “BB Talk”. In “Miley Tibetan Bowlzzz,” Cyrus vocalizes and makes strange noises that are heavily coated with autotune for the duration of the track. In “BB Talk,” Cyrus, in addition to ranting angrily about baby-talk and making her distaste for public displays of affection clear, gives her opinion on armpits and her obsession with sniffing them, and mentions that she really wants to lick teeth.

Amidst Cyrus’ strange noises and drawn out words, it is easy to miss the actual lyrics. To get the full experience, one should try to listen to all the words.

Due to lyrics such as “the purple is collapsing,” “watching my friends eat my friends ruined my appetite” and “the sun is a giant spaceship tangerine,” many people have varied opinions on Cyrus.

Junior Titi Bolarinwa has a less than favorable opinion on Cyrus’ transition.

“She’s extremely immature, and she doesn’t know when to stop,” Bolarinwa said.

On the other hand, junior Maddie Frick is okay with Cyrus’ transition.

“I wasn’t really a fan of her when she came out with Wrecking Ball, but during the VMAs she just got really weird, and I think I’m fine with it,” Frick said.

The album can definitely be labeled as creative and heartfelt, as the creation of the 92-minute album must have been an exhaustive labor of love for Cyrus.

However, the most unusual thing about this album is not the lyrics but the fact that the album was released completely for free. Cyrus’ record company RCA did not drop a penny on this album; it all came from Cyrus’ own personal funds. Furthermore, Cyrus mentioned that the album was kept secret from her own record label.

“Nobody at the company was even aware that [the album] existed until it was finished,” Cyrus said in a personal interview conducted by Forbes Magazine.

Cyrus is a multi-millionaire celebrity who knows how to work the media and has produced carefully crafted, hyped-up songs to maximize her profits.

So, why did she drop a surprise album for free? Perhaps Cyrus wanted to show her fans and the public that for her, making music is primarily about expressing herself and not about what makes her the most money.

Miley Cyrus & Her Dead Petz is a bold new move for Cyrus and a unique experience for listeners.