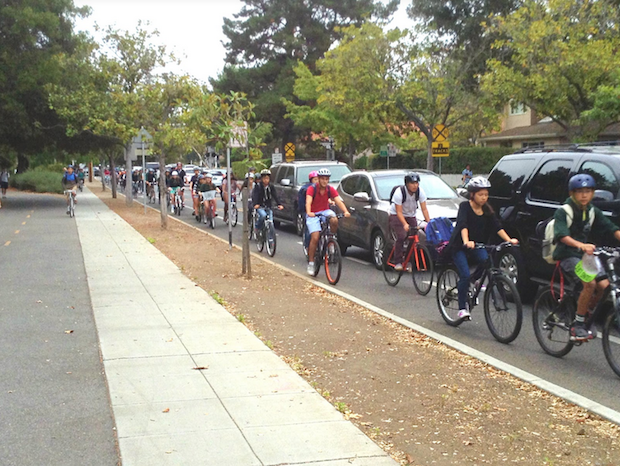 Students face the challenge of crossing Churchill Avenue in the mornings due to the congested narrow paths; the additional police cars creates a greater risk of bike accidents.

Jacky Moore
Opinion
September 18, 2015
On weekdays from 7:50 a.m. to 8:10 a.m., one to three adults can be seen on the corner of Churchill Avenue and Alma Street with their phones in hand, photographing Churchill Avenue’s bike lane.  Hordes of student bicyclists maneuver into Paly’s Big Gym lot, sometimes dangerously moving into the street to avoid cars pulled in the bike lane by the Palo Alto Police Department (PAPD).

With a larger freshman class joining Paly’s student body than those of recent years prior, there has been an increase in students biking to school, making the already busy bike lanes even more congested than before. The bike commute in the area near the entrance to the Big Gym parking lot has been further worsened by the presence of members of the PAPD and the police vehicles stationed in this traffic-heavy bicycle lane, which ultimately forces cyclists to merge with traffic.

In order to maintain the safety of bicyclists riding to Paly via Churchill Avenue on weekday mornings, the PAPD should keep Churchill’s bike lane clear for students by not pulling cars over to the side of the road before the turnoff into to the Big Gym parking lot.

The plethora of students and parents driving on Churchill Avenue and turning into the lot, bicyclists face considerable difficulty in attempting to cut into the morning’s heavy traffic. Cars that police pull over into the bike lane have the potential to backlog up to ten bicyclists, who are effectively stranded, and at the mercy of those in motion on Churchill Avenue.

Communication between bikers and drivers is limited, making it hard to know when a driver is yielding to a bicyclist or not. To ensure rapid, unhampered passage into the parking lot, many students choose to swerve suddenly into the flow of traffic, putting themselves at risk of being in an accident.

“You can’t really tell if a car’s going to let you in or not,” junior Kevin Chen said, referring to bikers trying to enter the traffic lane.  “Sometimes you just gotta go for it.”

Chen mentioned the dangers that accompany said lane changing technique, noting the difficulties that drivers on Churchill face with it.

“I guess it’s hard to know what the [student bicyclists] going to do, so it’d be pretty easy for an accident to happen,” Chen said.

The police’s conscious decision to position cars illegally crossing Alma onto Churchill in the bike lane is highly illogical, as it puts cyclists at a greater risk of being involved in an accident. However, the PAPD has stated it will continue to station officers at this intersection to cite bicyclists and cars that break the law.

“That’s where we’re gonna continue doing it because that’s where it’s safest for us, it’s where we’re able to see the [automotive] violation, and it’s a safe place for us to put the cars to keep us safe,” Sergeant Ken Kratt said.

Sgt. Kratt, the supervisor of the City of Palo Alto’s traffic team, did not mention any concerns with either bicyclists moving rapidly from the bike lane to the traffic lane or potential accidents that could stem from said spontaneous lane changes.

“We know it displaces the bicyclists,” Sgt. Kratt said, “but when we do go out there, that’s where we’re gonna stop the cars.”

When the police are not present at the intersection of the parking lot turnoff and Churchill to block the bike lane, both bicycle and car traffic move smoothly and safely.

Without obstacles in their path, bicyclists remain in the bike lane and, in turn, cars stay within the boundaries marking the edges of the traffic lane. No dangerous swerving takes place, and both cars and bikes travel fluidly and safely.  This isn’t to say that the police should refrain from pulling over bicyclists who aren’t wearing helmets and cars that illegally cross Alma onto Churchill; the officers should simply stop cars past the turnoff into the parking lot to prevent a backlog of bikers.

Few bicyclists ride in the segment of the bike lane 35 feet past the Churchill entrance to Paly, meaning that the police should use this less-populated stretch to stop vehicles rather than the lane’s more congested portion. The PAPD’s mistake to block a crowded division of Churchill Avenue’s bicycle lane can be easily remedied with a minor shift in location. By stopping cars past the turnoff into the Big Gym parking lot rather than before, bikers would no longer have reason to cut into and out of heavy traffic, preserving student safety and alleviating the concerns of both bicyclists and drivers alike.