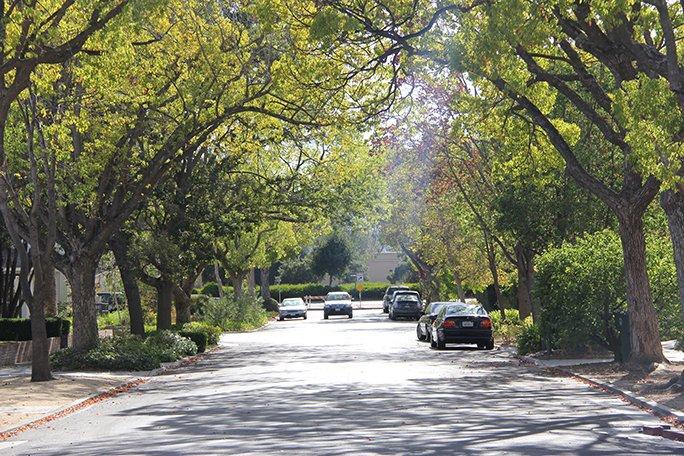 Residential parking permits to be issued

Anna Moragne
News
September 18, 2015
As of Sept. 18, the City of Palo Alto has begun to enforce parking permits in the Residential Preferential Parking (RPP) district, requiring anyone who wants to park within the district for over two hours to have a permit.
Due to the limited amount of parking available at Palo Alto High School this year, many have chosen to park in nearby residential areas and walk the remainder of the way to school.
“I’m not going to have a place to park any more,” junior Quinn Knoblock said. “I mean, I’ve had to think about doing a carpool or something else now. I don’t have a plan yet, and I’m sort of stressed out about how I will get to school.”
The RPP is displacing the drivers who have been parking on High Street, Emerson Street and Kingsley Avenue, all of which are near the Embarcadero Road entrance to Paly. The many juniors, and some seniors, who were parking in these locations, must find other places to park.
“At the end of last year I parked on Kingsley because they had permits in the Paly parking lot,” Knoblock said. “I had my license so I just drove to Kingsley and I can’t park there this year since there’s going to be residential permits.”
The RPP district also includes the area from Alma Street to Guinda Street and from Palo Alto Avenue to Lincoln Avenue and Embarcadero Road. Permits will be required for parking on any of the streets within the district.
Thomas Conn, a resident who lives within the RPP district, has had to put up with many Paly students as well as downtown workers parking in front of his house and along his street.
“I don’t like it, I think [Paly students] should park on their own campus because we don’t have a driveway, we don’t have a garage, and we have three drivers and when they take our place we have to park a few blocks away,” Conn said.
Palo Alto decided to start the RPP because residential streets were becoming overly crowded with people who work downtown and did not have another place to park. However, some residents are more skeptical about the new program.
“I don’t see how having parking permits here won’t just move the problem somewhere else,” resident Meredith Ackley said.
Students who don’t have a Paly permit have the option of carpooling with a senior who has a permit, parking in residential areas near the Churchill entrance to school or using alternative means of transportation such as biking or taking the shuttle.
According to the City of Palo Alto website, “an RPP program is intended preserve the integrity of residential neighborhoods which have an influx of non-resident parking, either from tourists and visitors, commercial employees and local business owners or commuter parkers.”
However, there are still times when people are able to park within the RPP district without a permit. Permits will only be checked from 8 a.m. to 5 p.m. on Monday through Friday. People are still able to park within the RPP district on weekends or on weekdays for less than two hours.
Employees who work downtown are able to obtain permits that enable them to park in the RPP district, but the city will regulate how many employee permits will be given out in order to prevent overcrowded streets.
Though these employee permits will be given out to non-residents, Paly students will not be able to get the parking permits and will have to look elsewhere for parking.
There are two different phases of the RPP program. Phase one will be in effect during the first six months of the program, and phase two will last for one year after the first phase is complete.
In phase one, all residential permits are free and there is an unlimited amount of employee permits. These employee permits will be priced at $233.
In phase two, a household can get up to four parking permits, with the first being free. In addition, the number of employee permits will be limited.
In phase two, additional residential permits will be $50 and employee permits will be $466. Visitor permits are available for $5 and are only valid for one day.
Type to search or hit ESC to close
See all results