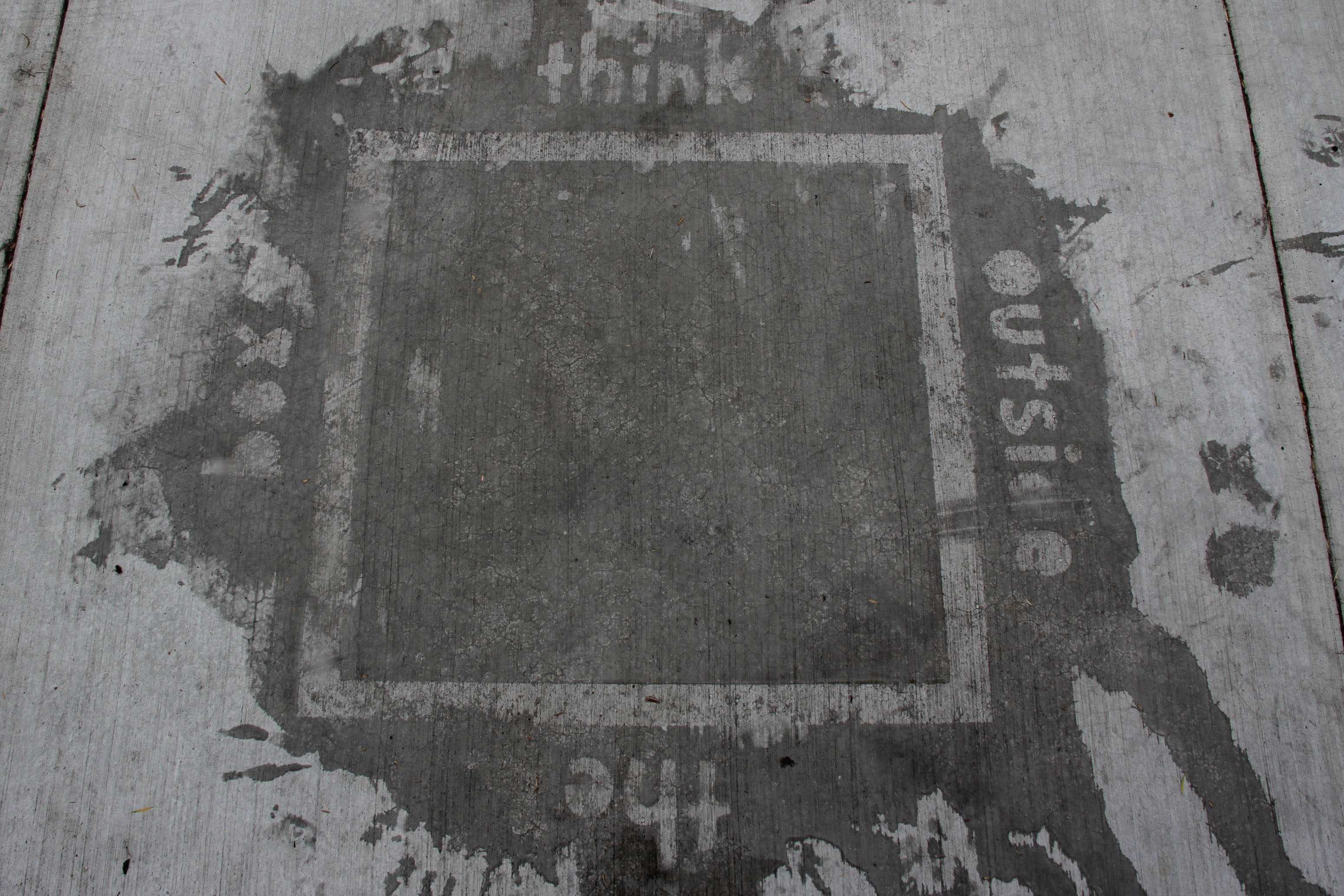 A Rainworks art piece outside the Media Arts Center activates when splashed on by water. The art project is now open to all Paly students interested in participating.

These student-created messages are hidden on the ground when dry, but begin to appear when it rains. Currently, there is a Rainwork outside of the Media Arts Center that says, “Think outside the box.”

Erin Angell, English teacher and co-founder of the Social Justice Pathway, initially saw Rainworks featured on the news in Seattle, and thought that the cheerful messages would be able to benefit students at Paly.

Although California is in the middle of a drought, students who are part of the Social Justice Pathway claim the art will still be as impactful as rain is expected this winter.

“The message will appear on a rainy day when a lot of people are feeling down, and there [will be] something to brighten someone’s day,” junior Ahana Ganguly, Media Coordinator for Social Justice Pathway, said.

The Social Justice Pathway made these rain-activated artworks as a token of appreciation for the community. Plans for further messages such as “injustice anywhere is a threat to justice everywhere” are intended to uplift students during those upcoming rainy days.

“[Sometimes] you’ll have a really bad day that is not going well, and you see one thing that gives you hope,” junior Yotam Ponte, a Social Justice Pathway student, said. “Well, I hope Rainworks does that for students at Paly.”

“I think people should do stuff like this more in the future, because it makes Paly a better place to be,” junior Nicole Li, Human Relations Director for Social Justice Pathway, said. “During rainy days when people see something inspirational it may seem like people are looking out for them.”

The project has been going on since last year, but it took a few months to obtain the materials and create the stencils. Junior Sara Sundemeyer created the stencil designs, and then students voted on which designs to use. Students use a hydrophobic spray that creates a barrier between the pavement and water, so when it rains the surface behind the art darkens and a message appears.

Even students who are not part of the Social Justice Pathway participated in the project.

“It’s really satisfying working on it because we had this idea and to see it put on the pavement for everyone to see, and actually being able to do it is really fulfilling,” Li said. “That’s why we put an ad on InFocus for other people to join us because it would be great if other people could feel fulfilled and make fun art projects.”

While the students are still deciding on potential areas of the school to put the designs, they have already planned on placing some designs by the history and math department. Once rain falls, the artwork will be visible for everyone on campus to see.

With these Rainworks designs, the Social Justice Pathway students hope to inspire students to create artwork, become participants of artistic expression and contribute to spreading positivity around Paly’s community.

“The messages are just daily reminders for people to think positive and lead the lives they would like to live,” Sundemeyer said.