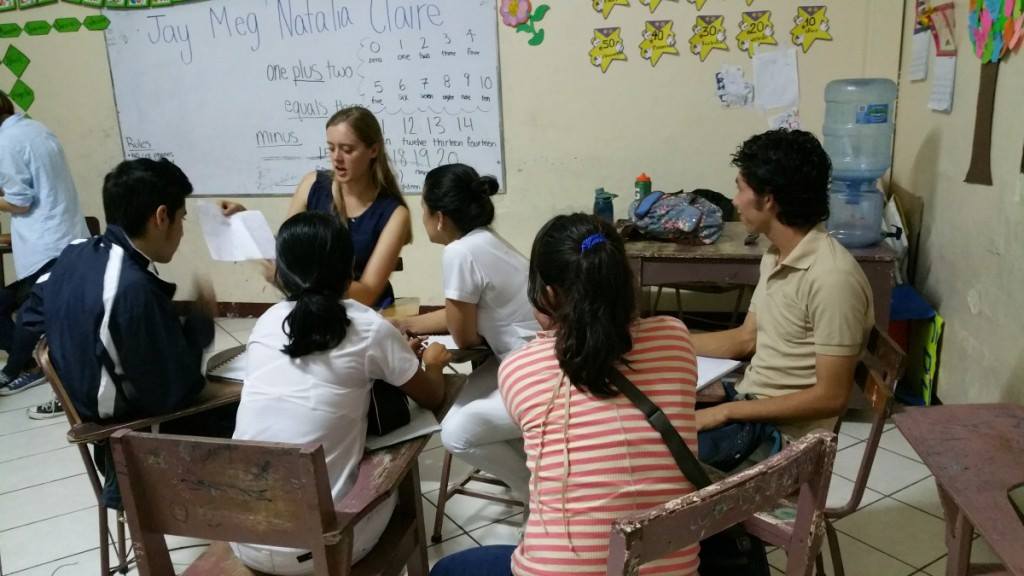 While on her Global Glimpse service trip, senior Claire Krugler teaches students in her English class in Matagalpa, Nicaragua.

Lifestyle
September 18, 2015
Students in Palo Alto often mention that they live in a bubble, but many of them do not really know what that means. Over the summer, a group of rising Paly seniors decided to participate in a program to explore the world outside of Palo Alto by embarking on 17-day trips with Global Glimpse, a non-profit whose goal is to “open the eyes of tomorrow’s leaders.”

Global Glimpse aims to show students how others throughout the world live and encourage them to act as responsible global citizens. The organization strives to be accessible to all students, regardless of socioeconomic status, as it truly believes that the exposure that students get on the trip will provide them with enhanced knowledge and awareness of the world as a whole. On these exploratory trips, students travel in groups of 20, along with a few staff members. They spend their time helping the natives, learning about the local life, and building connections.

In November of 2014, Paly juniors were nominated by their history teachers to participate in the trip. If they passed the application process, they then participated in six workshops to prepare for the journey. The students had the choice to travel to various cities in Ecuador, the Dominican Republic or Nicaragua. They immersed themselves in the native cultures of their chosen cities because Global Glimpse believes that immersion, rather than just learning about those cities, is the most effective method of educating students.

Sophia Campbell was one of the 22 seniors who participated in these trips. Campbell went to Jinotega, Nicaragua at the beginning of June and thoroughly enjoyed her time there.

“It was probably the best experience of my life,” Campbell said.

Campbell decided to go on the trip because she was interested in seeing a different perspective of the world and felt that the community action projects that she participated in — making murals, signs and T-shirts for a community of poor students trying to create an identity for themselves — were very effective methods of achieving this.

Claire Krugler, also a senior, traveled to Matagalpa, Nicaragua for her Global Glimpse trip. Krugler’s favorite parts of the trip were the projects and service. These included a community action project where students renovated a local jewelry business and English tutoring where students tutored natives from the ages of 18 to 45. The natives were extremely appreciative though Krugler believes did not realize what a large impact she had on them until the very end of her trip.

“[Our English students] gave us a little speech about how thankful they were for us and they gave us all bracelets and a nice wallet,” Krugler said. “It was really nice coming from them because they don’t have that much.”

“It was fun to watch them try to figure out how to teach English,” Foug said.

Foug was surprised by how much he too enjoyed participating in all of the service activities and learning with the kids. In fact, he felt as though each day’s activities outdid the previous ones. Foug was exhausted but mentioned that he still loved every moment.

“I was surprised because I don’t have a real high threshold for discomfort,” Foug said.

Aside from the service projects, the students got opportunities to live like the natives by challenging themselves to live off of one dollar for a day. Campbell felt like this experience was life changing.

“[Living on a dollar a day] was  very eye-opening as to how so many people in the world live,” Campbell said. “We took bucket showers and ate rice and beans. That day I also went to spend the morning with a rural family.”

Through her time with her host family for the morning, Campbell gained a lot of knowledge into how billions of people in the world get through each day.

“They had dirt floors and houses made out of scrap metal,” Campbell said. “The thing that was very surprising to me was how happy all of the people were. They had never experienced anything else.”

Krugler echoed Campbell stating that seeing the cultures and lifestyles of different people were important parts of the trip.

A leadership and service trip like Global Glimpse not only has a huge impact on the natives receiving the service but also on the students giving it. Krugler believes her trip gave her a lot of awareness to her as to how diverse the world really is.

“There’s a lot more out there in the world and a lot more that you can experience,” Krugler said.

Foug noted how the level of maturity of leadership the students achieved was incredible.

“[The skills they developed] were what anyone would learn through experiences like a job, but [the students] were just getting it from the trip,” Foug said.

Both Campbell and Krugler were blown away by their experiences on the trip and would recommend it to any juniors nominated this year.

“It exceeded my expectations,” Krugler said. “I think that going into Global Glimpse, a lot of us didn’t really know what to expect because it was the first time that Paly has been involved with this program. But when I showed up I made friends with the other students really quickly and we had so many amazing experiences.”