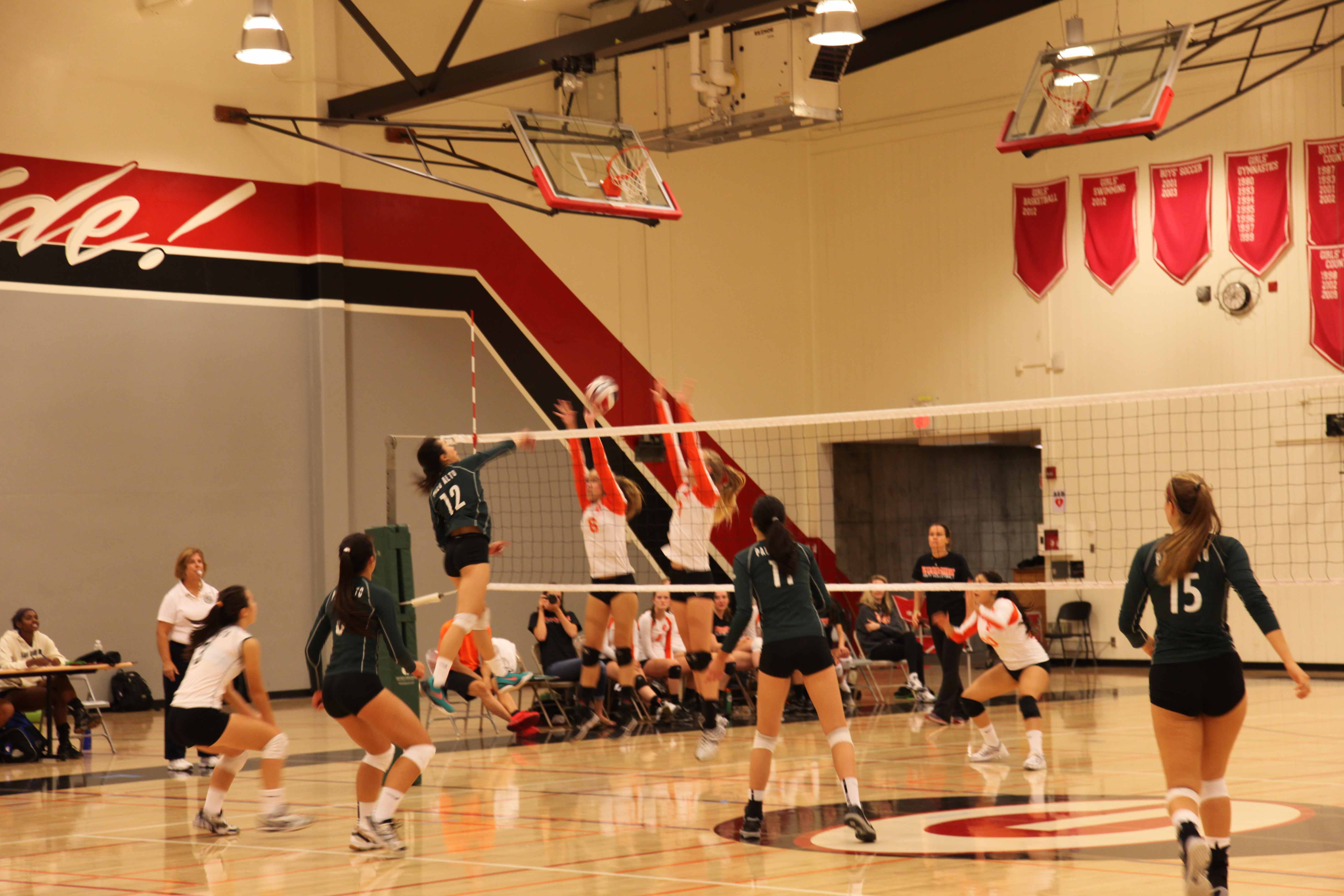 Sophmore Chelesea Fan hits the ball past Woodside blockers in the team’s home opener. Fan led the team with 11 kills in the preseason victory against the Wildcats.

Palo Alto High School’s volleyball team has faced many challenges this year: it has yet another new coach, no home gym to practice in and many previous seniors have graduated. The girls’ new head coach, Jekara Wilson, has had experience with many of the players and has been coaching volleyball for a long time. Wilson has been the junior varisty head coach and varsity assistant coach for the last nine years, and has now stepped into a major and much needed role in the athletic department.

“Jekara rocks,” senior Bryce Rockwell said. “I’ve had her since my Freshman year and I love her, she definitely knows what to do.”

Since the turnover of new coaches in the last few years has been a challenge for the girls, they are excited to be coached by a familiar face.

“There’s multiple reasons [that the coach from last year didn’t come back] as well as a lot of confusion on the issue so it’s not something we can give definite answer on, ” junior Katie Passarello said. “We’re just focusing on this season now.”

“I think one of the challenges that we had to overcome was a whole new system of how the volleyball community is now going to be,” Rockwell said.

They will be having no home games, which could mean less turnout at games. Since away games are harder to get to and take more planning, the support the team needs will be lacking compared to previous years.

“Having no team room is going to be hard,” junior Alicia Mies said.

The volleyball team uses its team room in the gym to store its equipment and also to have lunch in and bond before games. The room provides a space to build a stronger sense of trust and friendship. However, even without the gym, the girls believe they will excel.

“I love every person on the team,” senior Clara Chiu said. “I have a unique relationship with each person and I think that having such strong bonds with each other off the court will help us on the court.”

Because the team is so tight-knit, they understand each other’s playing styles and can easily make up for all the challenges this season presents. The relationships on the team are bound to grow and the chemistry between the returning players will be crucial to the team’s success.

“Most of us have played together before, and we are a tight-knit group of girls,” junior Fiona Green said.

The girls predict that they will do well in the upcoming season. The combination of talented players, a new coach and great friendships will lead to a strong team.

“I think we’ll have a good season this year,” junior Jessica Lee said. “Even though we aren’t a tall team, we are very competitive and we won’t give up easily.”