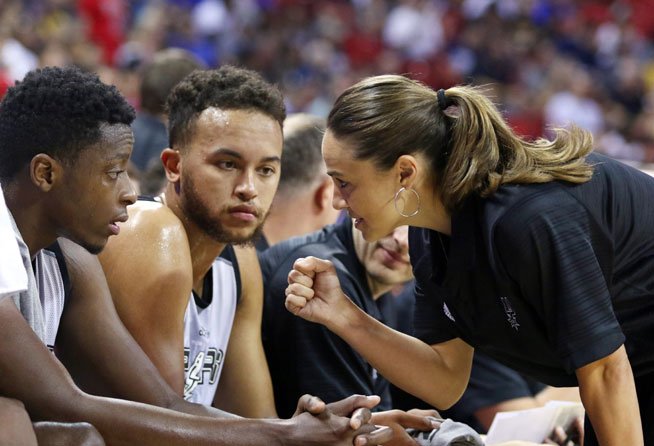 Becky Hammon, head coach of the San Antonio Spurs NBA Summer League team, talks to players in a game versus the NY Knicks.

Women rising to forefront of the sports industry

There is something about female athletes that draws attention to the sports industry in unprecedented ways. When female players advance in their sports, it seems as if their endurance and distinctiveness set them apart from men. While the sporting world still thrives on its male-dominated culture, certain parts of the field have been significantly impacted by the influence of female trailblazers.

The past three years in particular have shown a sudden rise in female presence in male-dominated sports. In July, Becky Hammon became the first ever female head coach in the National Basketball Association’s (NBA) Summer League when the San Antonio Spurs announced she would coach the team. Three weeks later, Hammon again made history when she led the San Antonio Spurs to the Las Vegas Summer League title and became the first NBA female head coach to win a summer league title.
“I think anything is possible,” Hammon said in an interview with Yahoo Sports. “Just because something’s never been done doesn’t mean it can’t be done. Leadership has no gender.”
Jen Welter, hired for a 6-week internship as an inside linebacker’s coach for the Cardinals is also the first female coach in football. Hired in July, she is the first female coach of any kind in National Football League (NFL) history. But Welter’s 6-week internship is over and now the question is, will her time in the NFL open the door for more female coaches? Hammon and Welter have both been working for years to achieve what they have and the pool of women similar to them is still very small. Hopefully, with women like these leading the charge, it will not be long before women are dominating the sidelines at all levels of men’s sports.

Besides entering the coaching sector, more and more women are appearing on TV as sports analysts. In August, the Charlotte Hornets hired former sideline reporter Stephanie Ready to join the broadcasting booth as a game analyst, making her the first full-time female analyst in the NBA. Ready played basketball at Coppin State University and was an assistant coach and recruiter there before spending 12 years working with the Hornets’ broadcast team in various capacities. Four-time First Team All-American softball player and sportscaster Jessica Mendoza joined Ready in the history books after being named the first female analyst for ESPN early in September. She attended Stanford University on a softball scholarship, was on the U.S. National Softball Team for six years and has been to two Olympic Games.While this is an incredible achievement for female analysts in general, it is unfortunate that it has taken these organizations this long to realize the potential that women have to be great sportscasters. [pullquote speaker=”Becky Hammon” photo=”” align=”left” background=”on” border=”all” shadow=”on”]Just because something has never been done doesn’t mean it can’t be done. Leadership has no gender.[/pullquote]

There is still a staggering number of people who believe that women are incapable of reporting on mens sports despite that fact that women have been sideline reporters for decades. With any luck, the next generation of sports fans, which will grow up seeing and hearing women such as Mendoza and Ready in every role, will be as nonchalant about a woman calling an NBA game as our current generation is about a woman doing sideline interviews at an NFL game.

Earlier this year, the NFL broke down another gender barrier when it hired Sarah Thomas as the first NFL female official. Thomas began officiating high school games in 1996 and was the first woman to officiate a Division 1-A high school football game in Mississippi. She began coaching college games in 2007 and in 2009 again made history as the first woman to be chosen to officiate a bowl game at the Little Caesar’s Pizza Bowl. Immediately following the public announcement of Thomas’ new position, four women applied for officiating jobs.

Although this is a major accomplishment for Thomas, she is technically not the first woman to ever officiate an NFL game. In September 2012, Shannon Eastin became the first ever female to be a referee in a regular season game. She was selected to officiate an exhibition game between the Detroit Lions and St. Louis Rams during a period where all the full-time officials were on strike.

“It shows the strides women and girls in sports have been making since Title IX was passed 50 years ago,” Kathy Babiak, co-director of SHARP, a partnership between the Women’s Sports Foundation and the University of Michigan, said to the Huffington Post. “Before Title IX, these kinds of opportunities for women and girls were not even imaginable. It shows that women and girls have a desire, interest and ability to work in sports at all levels — even men’s professional sports. Some girl will be watching Sunday and say, `Hey, I want to do the same thing!’”

One of the major reasons these women are where they are today is due to Title IX, a law passed in 1972. This law requires all schools receiving federal funds to provide female students equal opportunities to participate in educational programs, including athletics. Title IX has its fair share of opposers but there is no arguing that it has done its job.

In 1971, one year before Title IX was passed, only about two in every 50 girls took part in high school sports. By 2012 the numbers increased to about two in every five. Today, a typical National College Athletic Association (NCAA) college is fielding at least eight womens teams. Because of Title IX, more women have received athletic scholarships, thus increasing the opportunity for higher education.

Two-time world champion and Olympic gold medalist Mia Hamm credits Title IX for the chance to play sports at a higher level. In an interview with Makers.com, Hamm stated that the value of Title IX for her was that she was able to gain an athletic scholarship to the University of North Carolina (UNC). Her experience at UNC helped her to become one of the greatest female athletes in the world. Twelve-time Olympic medalist Dara Torres attended the University of Florida on a swimming scholarship, a possibility which she attributes to Title IX.
After many years of being thought of as incompetent and incapable on the field, it is nice to see women getting the respect they deserve. Having all these powerful women in the sporting industry will encourage more and more young girls to play and will help them realize that their athletic dreams are achievable.

Not only is it within reach for girls to imagine themselves holding a championship trophy or getting the gold, but also to see themselves in leadership positions in what was once a male-only field. In a few years, hopefully this was just the beginning of an incredible movement towards gender equality in the sporting world, led by a few female trailblazers.