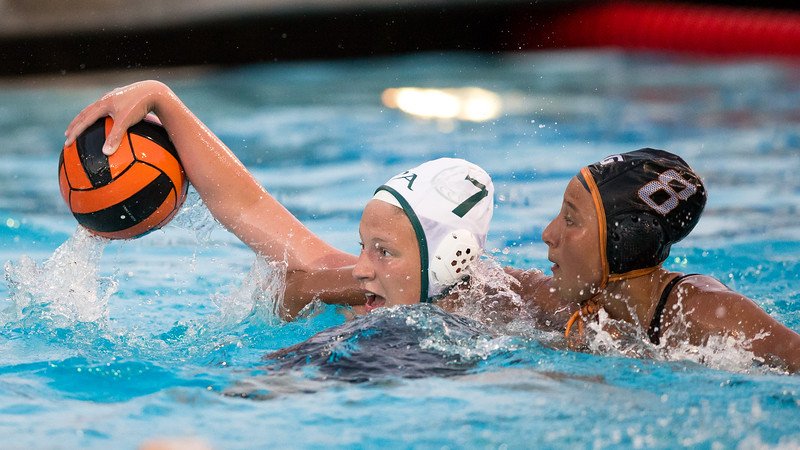 Senior Katie Francis attempts to score in a match against Half Moon Bay High School.

Jacky Moore
Sports
October 7, 2015
Having won nine games so far this season, Palo Alto High School’s girls water polo team is looking to continue its 6-game winning streak. The Lady Vikes credit their success to the fact that every player has a unique set of skills that contribute to the team’s success.

Hall cites the team’s ability to draw from a multitude of players as a major reason for its win against Lincoln.

“Everyone has something different to contribute,” Hall said.

After its win against Aragon, the girls water polo team emerged victorious against Half Moon Bay High School, preserving its 3-game winning streak with a final score of 10-6.

Solid performances from both Francis and Rojahn, each contributing three points, two goals from Hall, and one goal from both senior Claire Drebin and Sophie Frick helped to secure the team’s win.

“I think our defense was really good,” Hall said.  “We weren’t really getting out on the counter as much as we could, but we were shooting a lot, which is something we’re trying to work on.”

Paly won against Saratoga High School on Tuesday, Sept. 29. Junior Haley Chalmers and seniors Alina Drebin and Francis each scored three more goals while Frick and Hall both added one more goal, making for a 11-5 win for Palo Alto.

The Lady Vikes will play against Los Altos High School on Tuesday, Oct. 6 and hope to add a win to their 6-game streak.  Hall expects that all of her teammates will contribute at their upcoming game against Los Altos.

“We can trust our teammates and rely on each other to win the game,” Hall said.