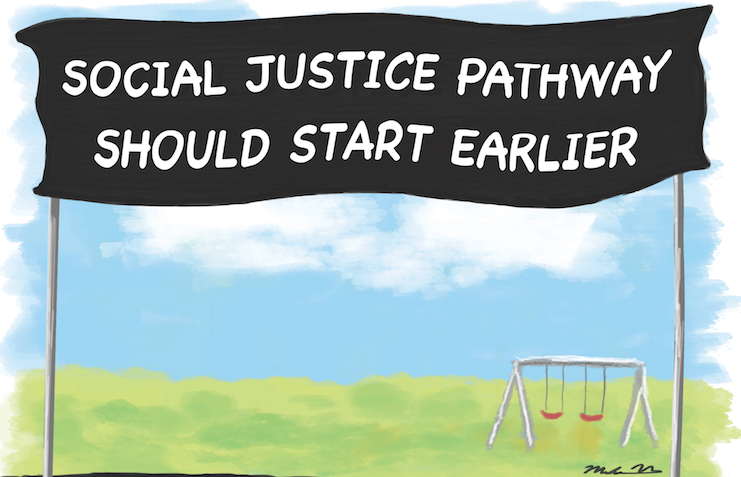 In schools across the nation, young students should begin taking a break from the conventional ABC’s and cursive for a new subject: social justice.

Encompassing issues such as racism, gender equality and rights for minorities, social justice has long been a controversial topic in both schools and society.

Social justice explores inequities throughout the world, exposing race and religion-based biases, wage gaps and LGBTQQ rights, to name a few. Due to their controversial and occasionally explicit nature, social justice issues are usually kept far away from elementary schools, and are rarely referenced in middle schools.

Despite this general hesitation to inform younger students of such difficult topics, social justice actually teaches lessons that are truly applicable beyond the classroom. Students should be educated on tolerance and acceptance at a younger age in order to promote greater open-mindedness.

At Palo Alto High School, these ideas are reflected in the Social Justice Pathway (SJP), a 3-year program beginning sophomore year that combines Common Core curriculum with social justice education. In its pilot year, the program already positively impacted students who chose to take it.

“Learning in a less traditional way has given me a new perspective on a lot of different topics,” SJP student junior Avery Pearson said. “I definitely have a better understanding of social justice issues in our community and the world after a year in the pathway.”

Integrating social justice into the  regular curricula allows students to connect what they have learned in typical curricula with more tangible situations. For instance, instead of simply learning about the Civil Rights Movement, students should also be informed of the present-day Black Lives Matter campaign and the connection between the two, a lesson which is covered by Paly’s SJP. This creates a more valuable and real life education, teaching both a required topic and an important social justice issue.

If elementary and middle school students were to receive a blend of general curriculum and social justice education, they would have a constant exposure to not only relevant issues, but also important ones that affect a wide range of people.

Breaking down these issues and their causes would allow students to develop a more understanding and accepting way of thought. By high school, these students would not only be well-rounded individuals, but also more prepared to take on the challenges that exist in the real world.

A major part of the hesitation and apprehension towards teaching social justice concepts to students is the level of maturity  and innocence associated with those of a younger age, especially elementary school children.

“Part of the concern [is], you [shouldn’t] tell them what Christopher Columbus actually did, because that will traumatize the children,” SJP teacher Erin Angell said. “I think that there are ways to address these kinds of topics in a way that’s developmentally appropriate. It doesn’t do anybody any service to avoid things that are unpleasant.”

This fear of scaring or overwhelming children places emphasis on their well-being and is a valid concern. However, social justice can be taught without mentally scarring a class of 9-year-olds. By providing students with facts rather than sugarcoated history,  students will not only gain more accurate knowledge than before, but will also be able to apply that to curricula knowledge in the future.

Take, for example, Columbus. Upon arriving in North America, Columbus and his men enslaved native inhabitants, forced them to convert to Christianity and committed many atrocities against them. Rather than simply teaching students of Columbus’ voyage and the geographical mix-up that led to the branding of American Indians, informing students of the basics of what happened afterwards, sparing gory details, would aid them in understanding the multifaceted nature of his national holiday. A holiday which, incidentally, celebrates the marginalization of indigenous people by men like Columbus who quickly became the majority in America. This clarification helps students understand a major social justice issue while learning about actual events of history. Society faces a constant turmoil and struggle of social injustice, and implementing education of these injustices into the elementary and middle school curricula can eventually create a generation of students that can advocate for equality and against injustice.

By educating students on social issues from a younger age, they will be encouraged to expand their way of thinking and create change in their own community and in the rest of the world.