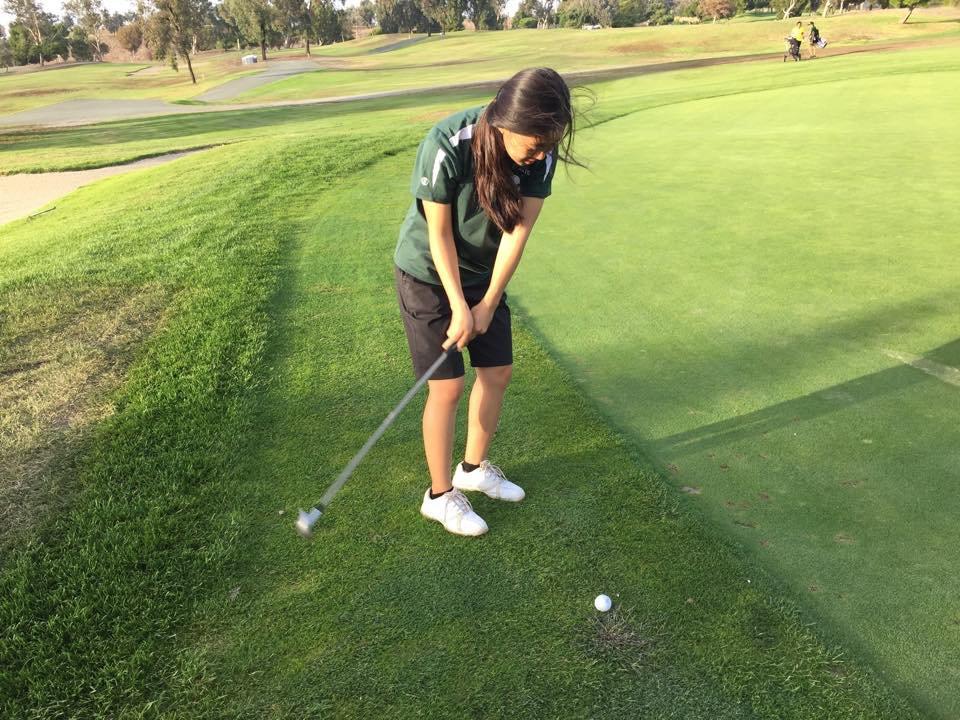 Junior Joyce Choi swings back her club to chip the golf ball onto the putting green.

The Palo Alto High School girls golf team claims yet another victory as they win against Homestead High School for the second time this season with a score of 224-259 on Sept. 28 at the Sunnyvale Municipal Golf Course.

Coach Doyle Knight feels confident about the girls’ placement so far in the league and is impressed with what the team has brought to each match, especially against Monta Vista High School, when Paly declared victory with a score of 212-239.

“The Monta Vista match was big,” Knight said. “My seven, eight and nine players played. I had a meeting with the team before our match and told them this match may be harder than we thought [and] to be ready, and they did great.”

The girls representing the new lineup for the difficult match proved their athletic ability by playing significantly lower than their average scores.

Wagner is excited about the new surge of high-level playing from the team, especially after the team unfortunately suffered its first loss of the season against Lynbrook High School on Sept. 15.

“As a team we were kind of let down,” Wagner said. “We thought we would win, but we felt like our main problem with that match was they had just redone the front nine [courses] so none of our team had played it recently and the other team had, and we felt like their home course advantage was huge.”

Even though the loss was hard on the team, Knight believes that the mental aspect of the game is just as important as practicing technique.

“We practice two hours a day, three days a week, and a lot of us practice individually on our off days,” Wagner said. “Just knowing how the course is and getting prepared mentally is one of the main things Knight wants us to focus on in our upcoming matches.”

Knight plans not to dwell so much on the team’s first loss and instead plans on looking ahead towards the more skilled teams that the Paly girls will have to overtake to have a better standing for the Santa Clara Valley Athletic League (SCVAL) title. The next few weeks will be integral in order for the team to obtain the title.

“Los Gatos will be tough, but I try to get the girls mentally prepared before a match and to think about the course they will be playing and how they want to play it,” Knight said. “This way when they play, they have an idea of what they want to do and [don’t] just wing it and hope for the best.”

Wagner also believes that a positive attitude can greatly help advance the team during a match, so she is happy to see that the team has such a strong connection both on and off the golf course.

“All the girls on the team are super sweet, and we are very supportive of each other,” Wagner said. “We hang out at practice and also get together outside of golf for fun, and I feel like it helps us play even better together and gives us even more confidence on the course.”

Knight is confident that the girls are on a winning pathway towards the SCVAL title as long as the team can maintain its consistent strong mental game throughout the remainder of the season and their focus against stronger opponents.

“All the girls have improved from last year and our scores are staying low so that is very encouraging,” Knight said. “Lynbrook, Los Gatos and Gunn are the harder teams, but if we do [win] we have a very good chance of winning our league title.”