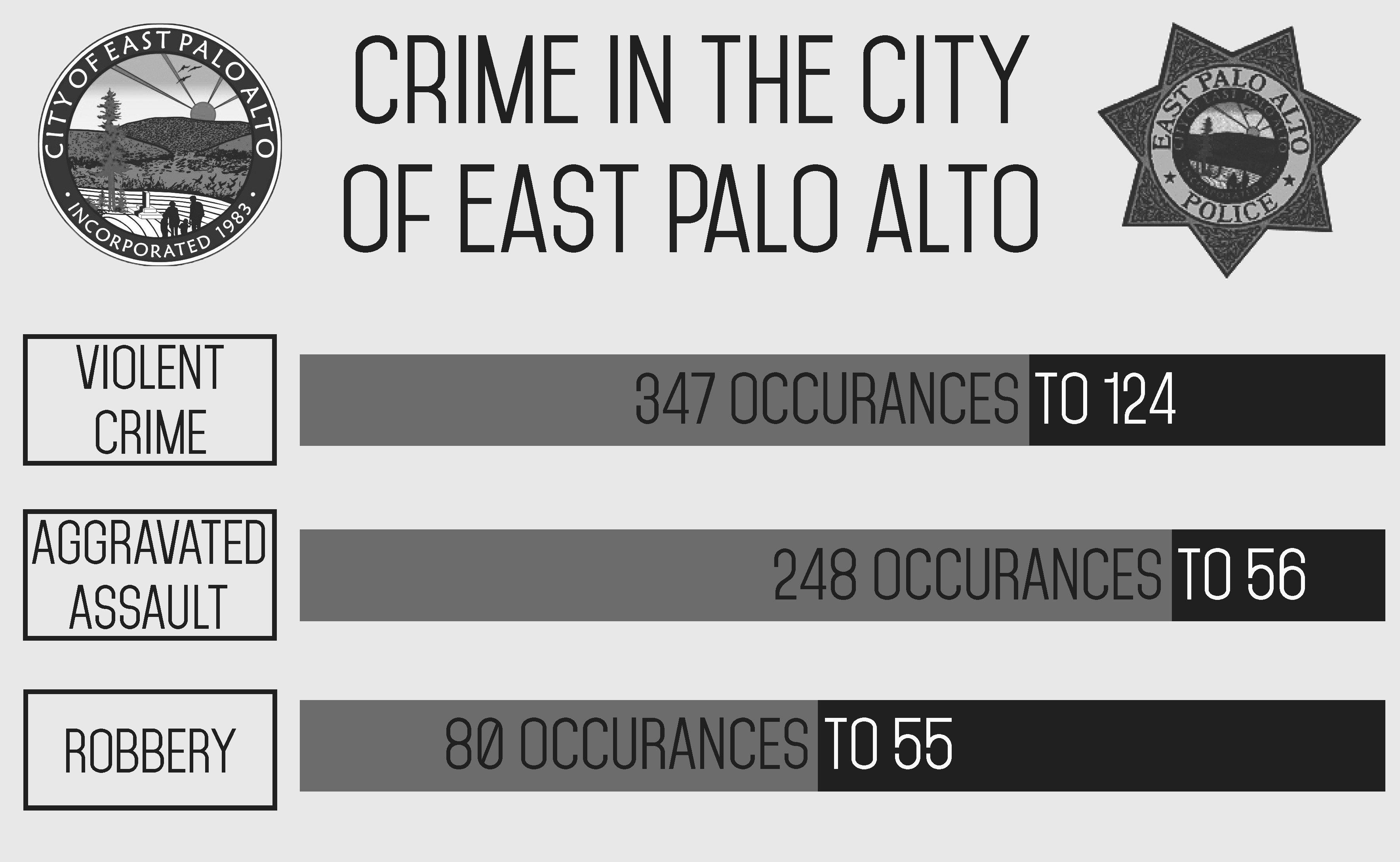 According to the Federal Bureau of Investigation annual report, crime in East Palo Alto (EPA) has dropped by 64 percent from 2013 to 2014.

Since 2013, the epidemic of EPA crime has taken a brighter turn. According to Palo Alto Online, violent crimes have decreased from 347 occurrences to 124 from 2013 to 2014, while aggravated assaults dropped from 248 to 56. In 2013, there were eight reports of murder or manslaughter and in 2014, that number had dropped to five. Reported instances of rape have fell from 11 to eight while robberies dropped from 80 to 55.

“I had a person from [EPA] come in last week and said she’s lived in EPA for over 20 years,” Steve Wagstaffe, the San Mateo County District Attorney, said in an interview with the Peninsula Press. “The shocking thing is that since this all went public … she had not heard a gunshot or a police siren.”

The deaths of Chariece Chew, Christopher Baker, Jonathan Alcazar, Stoney Gipson and Lamont Coleman, all of whom were gang members, highlighted the ongoing issue of gang violence in EPA. Chew was shot by three of his rivals as he was driving onto Highway 101 in Sept. 2012 in an attempted murder. About a week after that, Baker was found dead on Terra Villa Avenue in EPA. Gipson, 27, was shot by four men outside of a nightclub two nights later. In Jan. 2013, Coleman and Alcazar were both shot in a gang-related dispute.

These crimes forced former police chief Ronald Davis to declare the city in a “crime emergency” in an attempt to rid the city of its notorious reputation. Officers were forced to work overtime and were no longer allowed to take off-days.

Incidents of gang shootings in EPA are reportedly almost always the result of territorial disputes regarding where neighboring gangs can sell drugs. However, despite the fact that most gangs do not target innocent individuals, many citizens have claimed to have been caught in the crossfire. Three-month-old Izak Jesus was killed due to stray bullets from a gang fight, proving their complaints valid.

In November of 2014, Police Chief Albert Pardini was placed in charge of the EPA Police Department (EPAPD), replacing Ronald Davis. Although the decrease in crime occurred after Pardini assumed his role, he is still looking for ways to further improve the effectiveness of the police force.

One tactic that Pardini thinks will help his cause is getting the community to be more proactive in fighting crimes. If people are more willing and faster to report crimes, the police would have quicker response times and prevent the crime from harming bystanders.

“They are calling us early so we can get involved before things escalate,” Pardini said in an interview with the Palo Alto Weekly. “We’ve done a lot of intervention and that has reduced the violent crime. Getting the community to come forward when they witness crime is an ongoing effort”.

Police have also used social media to help solve cases. Using platforms such as Facebook, the department has been able to track the posts of individuals who have committed crimes that pertain to investigations. This implementation of social media has led to the indictment of 16 people, 11 of whom reside in EPA.

Along with domestic-violence awareness and gang education programs, the department also holds monthly meetings where citizens can meet up and discuss issues with officers about their neighborhood.

“I will be doing [the meetings] in various parts of town.” Pardini said in an interview with Mercury News. “It’s an opportunity to meet with community members I haven’t been able to meet with,”

In addition to increased social outreach, the department has tried to become more transparent, posting updates and information to its website every week to inform the public and clear rumors.

The efforts to be more aware and understanding of the community coupled with better communication have proven effective for EPAPD. In the first half of 2013 alone, there were seven homicides. Since August 2014, there have been only two.

The department is striving to perfect the tactics that they have been using to make law enforcement more efficient and beneficial for both the city and its people.