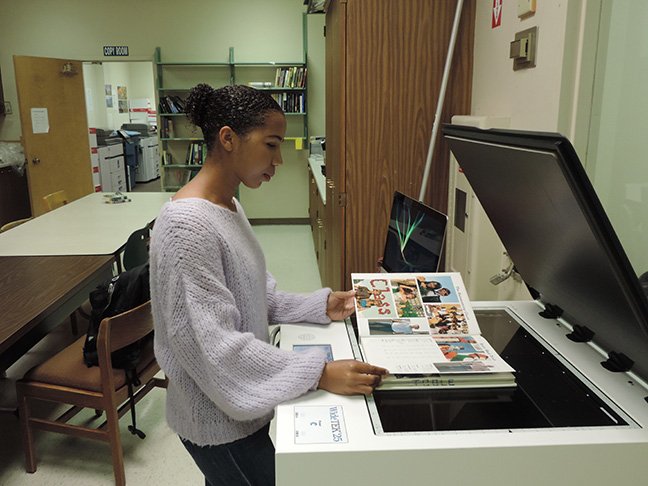 Before making the push for a comprehensive online archive, Kellerman was initially inspired by Paly’s rich history of journalism.

[pullquote speaker=”Rachel Kellerman” photo=”” align=”left” background=”on” border=”all” shadow=”on”]When I came to Paly 10 years ago I was amazed by all the wealth of information in the publications, dating back to the 1800s. I was amazed that there was this great archive that told the story of Palo Alto. [/pullquote]

However, upon becoming a Paly librarian, Kellerman noticed that the flimsy paper on which many of the publications printed would not hold up in the future.

“[The publications] were not being preserved,” Kellerman said. “There was a lot of degradation with the newsprint; things were deteriorating.”

Paly publications such as Verde, Madrono and The Campanile have been printing for generations, and a loss of hard copies would yield a loss of 120 years worth of Palo Alto history and culture. Kellerman sees educational benefits in creating a database, as students, teachers and the community would have ready access to over a century of detailed local information.

Thus, Kellerman’s mission has become to maintain old school publications, a mission she has set out to accomplish over the past few years through an online archive.

“We have about 40,000 pages and 120 years of Paly journalistic tradition to preserve,” Kellerman said. “In order for that to happen, we have to put our scans online and make them easily searchable.”

However, the process of creating an online archive for so many works takes a substantial amount of time. Fortunately, a temporary solution was reached.

“The [Paly] alumni association donated thousands of dollars for preservation boxes so that at least the pages wouldn’t deteriorate soon,” Kellerman said.

The boxes themselves are free of sulfur, acid and lingen. Though aging will still occur, the papers will stay relatively safe as Kellerman works to put into action her plan for scanning material. Creation of an actual online database involves scanning all of the 40,000 pages and then sending the scans to an outside party to reformat into an online resource. Currently, the archiving project has reached a standstill despite the many volunteers and new scanner.

“The Media Boosters funded a large format scanner,” Kellerman said. “Once we get that recalibrated we’ll start the scanning process.”

After purchasing the scanner,  Media Arts Boosters did not extend further funding to Kellerman’s digitation initiative, leaving her without any reliable source of money with which to hire database-making services.

Despite the tight financial situation, Kellerman has located and negotiated with a flourishing company, Veridian, which has a long history of making extremely successful online archives.

Veridian was responsible for creating an archive for Stanford University’s student newspaper, The Stanford Daily, as well as making a newspaper archive, spanning over 170 years, for the University of California, Riverside.

Given Veridian’s vast experience in archiving, Kellerman contacted the company and brokered a deal for the construction of Paly’s future journalism database.

“The price, with an educational discount is $60,000, and the project will be done over three years,” Kellerman said.

In order to raise awareness for the archiving project, Kellerman has worked with Paly senior Rachel Price to create a website and a video devoted to spreading the cause of digitalization for Paly publication archives.

The video summarizes the need for an online archive, ending with a link to a crowdfunding website where viewers can give donations.

“The [donation] fund will be open to anyone who has an interest, personal or other, in donating to journalistic, historical or educational projects,” Price said. “Each donation, small or large, can make a huge difference.”

However, the project has received limited community interest

“I’m kind of stuck at this point with what’s the best way to raise this money,” Kellerman said. “I’m not really sure what to do.”

Kellerman has approached Principal Kim Diorio and Dean of Students Adam Paulson, both of whom gave their approval for the project but did not say how money can be raised.

Also supporting the initiative are Paul Kandell and Esther Wojcicki, both Paly journalism teachers, who participated in the fundraising video and have been strategizing with Kellerman to figure out an effective way to attract funding.

“It’s an awesome project and everybody in the Paly community ought to be excited,” Kandell said. “But there’s a lot that’s still up in the air about the funding.”

Kellerman says that parents and alumni are the target population for potential donations. However the project still remains in limbo, with no funding.