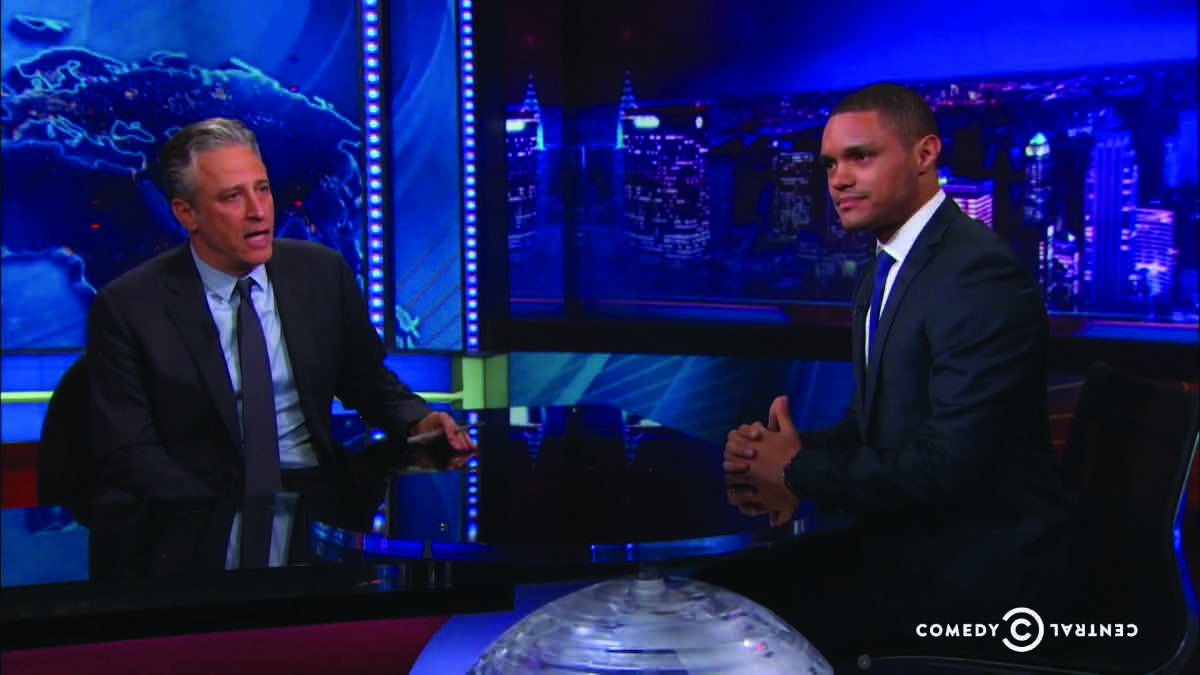 Trevor Noah hosts his first episode of the “The Daily Show” by sending off and praising his predecessor and mentor, Jon Stewart.

Trevor Noah takes over as host of “The Daily Show”

On Sept. 28, the new host of “The Daily Show,” Trevor Noah, began his first night as host by likening former host Jon Stewart to a comedic father figure.

“Dad left and now it feels like the family has a new stepdad, and he’s black,” Noah said.

Noah was put in a position that no comedian or talk show host would want to be in — he had taken over as the host of a show which a comedic legend who had won 20 Primetime Emmy Awards had been hosting since 1999.

However, Noah has been performing rather admirably. He was a correspondent on the show for five episodes before he became the host. Noah has sustained the integrity of  “The Daily Show” and kept the same style that Stewart used. Similarities aside, he has still been able to incorporate his own personality in the show as well. While Stewart was known for often being infuriated and exasperated at politicians to the point of stuttering and yelling, Noah is much more cool and collected. Compared to Stewart’s harsh sense of humor, Noah’s humor consists more of light-hearted jokes, often centered around his South African heritage. The show is now slightly less political than it was when Stewart was hosting. For example, Noah discusses popular culture topics such as the Star Wars mania that has ensued from anticipation for the upcoming movie.

Noah is very charismatic and charming, but at times he tells jokes that are more groanworthy than amusing. During his first night hosting “The Daily Show,” Noah made a joke pretending to be cocaine, claiming it is better than crystal meth because “[it] took down Whitney Houston.” The insensitive joke was followed by silence and collective cringes throughout the audience.

“The Daily Show” typically revolves around politics, especially during a presidential campaign season. Noah, however, did not cover the Democratic debate in a particularly interesting or comprehensive manner. He did not mention many of the important aspects of the debate and instead mainly focused on little, irrelevant events, like how many times Jim Webb commented that he did not talk every 10 minutes, as opposed to discussing more serious topics such as Clinton’s flip-flopping on major issues.

While Noah has had a multitude of missteps and unfunny jokes, he is still in the process of making “The Daily Show” his own. Just like in any other job, getting settled in takes time. As he settles in and the nerves of taking over a show previously hosted by a late night legend subside, Noah will get into the groove of the show. With time, his jokes will become wittier and the show will run smoother.

Among the cringeworthy ones, Noah has made many comical jokes, which are often self-deprecating or incorporate his South African background. For example, he compared Republican Presidential candidate Donald Trump to African presidents.

One of Noah’s best moments thus far was when he was discussing Ben Carson’s remarks about the recent Oregon shooting, which entailed that if Carson was involved in a shooting, he would tell the other victims to fight back. Carson claimed that he was involved in a shooting at “Popeye’s organization,” so Noah made fun of Carson’s use of the term organization, instead of restaurant, and created the website popeyesgivesback.org.

Although Noah is often very entertaining, one area of his that needs much work is his interviews. When interviewing politicians or other talk show hosts, he is comfortable and outgoing. On the other hand, Noah is awkward when interviewing celebrities. These interviews usually consist of Noah sitting and smiling uncomfortably. The celebrities do most of the talking and Noah consequently gives the impression that he does not know the person at all. This is normally quite boring — it would be more entertaining if Noah talked more to keep the interview funny.

Noah has yet to fill Stewart’s tremendous shoes; however, it is only a matter of time before he does. The Daily Show’s ratings have dropped by 33 percent since Stewart left, but once viewers get used to Noah’s humor, the ratings should go back up. Noah must prove that Stewart made the right choice when choosing who would carry on the role as host of “The Daily Show.”