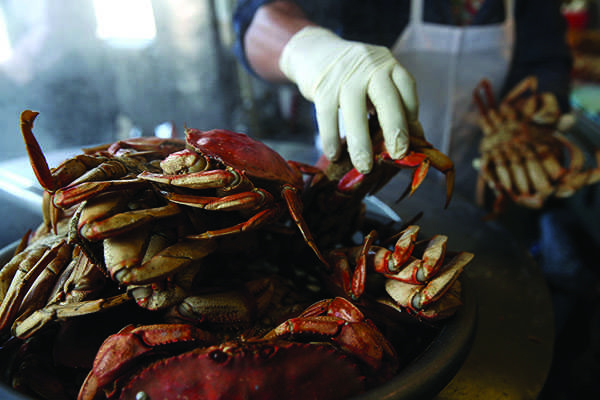 The California Department of Public Health has issued a warning report that people should not eat Dungeness crabs caught along the California coast.

San Francisco’s Fisherman’s Wharf would typically be preparing to harbor thousands of pounds of crabs at this time of the year; however, crab buckets have been sitting on empty docks due to the hazardous chemicals in the water.

“Due to the detection of dangerous levels of domoic acid, crabs caught in waters between the Oregon borders and the Santa Barbara County line pose a significant risk to the public if consumed,” the warning report said.

While the toxin can be colorless, odorless and harmless to the animals exposed to them, humans who have consumed these infected crabs have been poisoned.

Consumption or contact with toxic crabs can result in mild symptoms such as sickness, cramps and a headache.

Severe poisoning can lead to permanent memory loss, seizures, coma and in extreme cases, death. Cleaning or cooking these foods will not rid them of the domoic acid.

Domoic acid is a neurotoxin that causes amnesic shellfish poisoning. It is produced by algae and accumulates in shellfish, sardines and anchovies. The toxin started to spread in September, when more than 200 sea lions were killed from domoic acid poisoning in areas around the California coast.

As a result of the poisoning, the recreational crab season has been delayed and the rock crab fishery was forced to close until it is safe to harbor crabs again.

In an interview with the San Francisco Gate, California State Department of Fish and Wildlife Marine Manager Craig Shuman explained that delaying the season will be a disappointing, however public health is more important.

“Delaying or closing the season is disappointing,but public health and safety is our top priority,” Shuman said in an interview with the California Department of Fish and Wildlife.

The crab industry has already experienced profit losses, according to Dan Ayres, coastal shellfish manager for the Washington Department of Fish and Wildlife.

As of now, the prices of crabs have remained the same throughout markets in. However, many restaurants go off the menu due to the season’s scarcity.