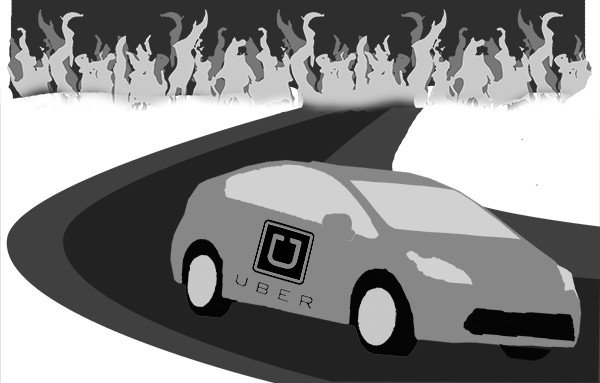 Uber, a well known ridesharing company, has become a primary means of transportation for people in big cities and suburbs around the world. Uber’s sign up page boasts that independent contractors get “freedom and flexibility to drive whenever they have time.” People generally like this idea because it seems like a socially conscious organization that gives people jobs and offers an inexpensive and convenient mode of transportation.

However, many frequent users of Uber are unaware of the problems within the company. Potential users of Uber should use alternative methods of transportation because Uber does not follow  government regulations, misrepresents worker incomes, employs inexperienced drivers and uses complicated pricing methods that inconvenience customers.

The biggest issue that Uber faces is that it does not provide insurance for its drivers. The company gets around these laws by hiring its drivers as third party contractors. This way, drivers themselves are liable for accidents when transporting passengers unless they have special insurance. Some drivers also run into problems with insurance even when they are not on the clock.

“In some cases, personal auto insurance policies are being canceled once the insurance companies find out that the driver works for Uber or Lyft, so they’re stuck with no personal auto coverage,” insurance broker Adam Cecil said in a PolicyGenius blog. “Complete auto insurance coverage is still unavailable to the vast majority of rideshare drivers.”

Another reason to twice before using Uber is that the company misrepresents important data about the earnings of its drivers to increase the interest of potential employees. For example, Uber has quoted incomplete data to support its claim that its employees are able to make enough money to support themselves. Karen Weise, a journalist with Bloomberg News, recently wrote about Uber’s incomplete wage information and concluded that Uber did not take driver’s expenditures such as gas and insurance into account.

Many Uber workers claim that they earn significantly less than the $16 an hour that Uber claims its employees make. To discover how much Uber drivers were really earning, Michelle Chen, a journalist from The Nation, interviewed a current Uber employee who claimed to make less than $3 an hour. Chen’s findings match Weise’s analysis of Uber driver expenditures.

Uber claims that if you have a car, “you’ve already got everything you need to get started.” Becoming an Uber driver is as easy as being 21 years old, completing an application, passing a background check and getting your car inspected by an Uber-approved auto shop.

What Uber does not explain to its potential employees is that in most cases, the countries and cities where its employees will be driving have more restrictive requirements than the ones Uber does.

For example, the San Francisco Municipal Transportation Agency (SFMTA) requires aspiring taxi drivers to schedule an appointment with the SFMTA taxi service office for a pre-screening evaluation, pass a taxi school, submit a 10-year driving record certified by the Department of Motor Vehicles, pay numerous fees and obtain a letter of intent to hire. After that, the driver is allowed to enroll in the SFMTA taxi class and attempt to pass the test. Assuming the driver passes, he or she gets an 8-week trial period with a temporary permit.

According to WhosDrivingYou.org, there have been 26 sexual assault “incidents” by Uber drivers in 2015 alone. Last August, Huffington Post reported that a Uber employee allegedly kidnapped and raped a client. There have also been other reports of kidnappings and assaults by various Uber drivers.

By making its drivers third party contractors, Uber is able to skirt government regulations. This allows drivers to not meet legal standards of other companies in the same industry, which means that the consumers are not as protected from unsafe situations as they would be with other companies.

Upon examination, it is clear that Uber is not as safe as many people think. Instead of grabbing an Uber, jump on a bike, with a helmet, or use safer public transportation such as taxi services. Then, a giant corporation intent on getting around government safety regulations in order to make money will have some healthy competition.