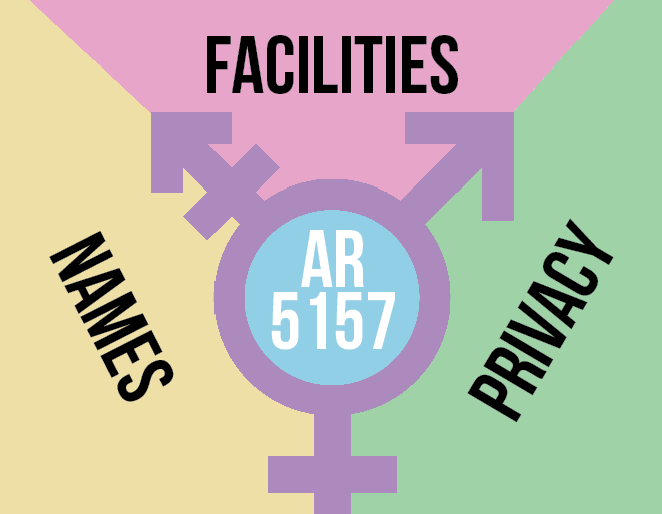 Jeremy Fu
News
November 20, 2015
A new gender identity and access policy aims to ensure the rights of transgender and gender-expansive students has been outlined by the District’s Lesbian, Gay, Bisexual, Transgender, Queer and Questioning (LGBTQQ) committee ahead of a school board vote.

The policy, which will go before the board for approval in December, includes guidelines to help school officials support gender-expansive students, including the use of names or pronouns, protection of privacy and use of restrooms and locker rooms.

“The policy provides greater context and guidance for ensuring the integration of transgender and gender non-binary students,” parent member of the LGBTQQ committee, Sara Armstrong, said. “We are not trying to do anything dramatically different, we are trying to create deeper understanding.”

Assembly Bill 1266, which includes provisions that ensure transgender students have equal access to all school opportunities, went into effect in January 2014 and was later included in PAUSD’s nondiscrimination policy in June 2014.

The LGBTQQ committee began working on the gender identity and access policy before the passage of the bill. The policy states that it is intended to apply to transgender students as well as those whose gender identity “whose gender identity or gender expression falls outside or in between the category of male or female.” Armstrong said that she hopes the policy will educate district faculty on the assistance that students may need.

“Everyone’s transition is different, so the guidance that is provided by this policy and by all the laws are not meant to be a one size fits all, but to allow people to understand the type of questions and assistance that might be requested,” Armstrong said.

AB1266 provides students the right to access restrooms and locker rooms according to their gender identity. However, AB1266 does not require schools to create to create gender neutral single stall facilities something that the new gender identity and access policy recommends.

“We had to lobby for them [single-stall all gender restrooms] even though I was told there would be gender neutral bathrooms set up for me this year.” Oliver said. “When my family touched base with them [the administration] two weeks before school started there were no bathrooms. I had to be given a key to the staff bathrooms and staff had to be notified because there were no operational gender -neutral bathrooms.”

But, students will still have access to facilities that correspond  with their gender identity and will also be welcome to use the alternative facilities. For Oliver, the restrooms provide increased privacy and protection from potential misunderstanding.

I don’t feel comfortable using the men’s bathrooms because I’m not always read as a guy.” Oliver said. “Going into the men’s bathroom is empowering; however, it comes at the cost of me being paranoid that I’m going to get attacked. I was verbally and almost physically attacked in a women’s bathroom last year because someone thought I was a man and I was still presenting as a girl.”

To combat misunderstanding, the policy suggests school officials work to “de-stigmatize the use of such options, as well as to establish clear guidelines and expectations with regard to respecting privacy and boundaries.”

“The way to reduce stigma about all issues of gender is to normalize it,” Oliver said. “At my private middle school, we had units talking about ‘taboo’ topics, not just sexuality and gender. Pretty much all the people I went to school with have questioned their sexuality and gender at some point because it wasn’t treated as a big deal — just as another word that they could use to describe themselves.”

While progress has been made, Oliver believes the administration needs  education on gender identity.

“My experience with the administration has been very double sided because they say they will do things but there is a huge backlog,” Oliver said. “They really are trying but they are so uneducated that it sometimes falls to me to educate when that should be the last thing on my plate.”

As for the day-to-day actions of teachers and school officials, the committee advocates avoiding segregating students into male and female teams. Paly’s administration has invited Gender Spectrum, an organization that provides training on gender identity, to speak to teachers early next year. The administration is also considering the addition of gender identity curriculum in school.

“I think training is critical, in some respects it is more important than the policy,” Armstrong said. “If the policy is not followed, or people do not understand it, what good does it do? The LGBTQQ committee is going to be working on a toolkit that makes it easier for people to understand.”

Henry M. Gunn High School’s  yearbook has proactively removed gender separation from yearbook polls, a change that Paly’s Madrono has yet to adopt. Editor-in-Chief of the Madrono, Liam Nororian, said including gender was a misstep in the polls and does not represent the true values of the publication.

“We as a publication encourage gender diversity and plan to eliminate regulations such as those that appeared to be imposed in senior polls, which encourage upholding societal gender constructs,” Nororian said. “We plan to emphasize that ‘cutest couple’ is open to couples that are not heterosexual and recreate our poll system so it excludes gender as a factor in the results of the voting.”

Students who want to lend their voices to the conversation can speak at the next board meeting on Dec. 8 or write a letter to the board by Dec. 1.