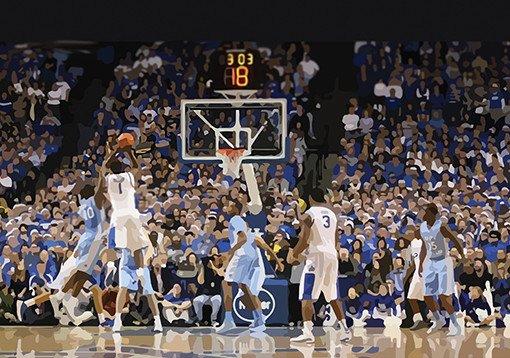 Quickly becoming one of the strongest conferences in the nation, these four teams may put together one of the more exciting races. Kansas, having been the conference champion over 10 times seems to be the common pick and for good reason. Being one of the annual national powerhouses that is built on the one-and-done rule, Kansas has been as consistent as any other team. Head coach Bill Self has led Kansas to at least the Elite 8 of March Madness 7 out of the last 13 years and won it in 2008. Iowa State seems to be the team which will give Kansas it’s hardest challenge as it has done recently, along with Oklahoma, led by star shooting guard Buddy Hield. Although Iowa State has flopped with a high seed in the tournament two years in a row, All-American Georges Niang and Monte Morris should have little difficulty learning first year coach Steve Prohm’s style.

With a new face on top of not only this conference, but the nation, North Carolina has great chances to win it all this year. Marcus Paige has slowly become one of the most reliable guards in the nation and is looking to prove himself unlike last year. Surprisingly, Duke is not on top this year despite winning March Madness, because when you lose so many players to the National Basketball Association (NBA), consistency at that level is difficult. Virginia is also another school that has recently become a common top 10 school in the past three years, but without swingman Justin Anderson, winning will become a greater challenge against strong teams. A team who made a strong push late last year was Notre Dame who is traditionally a football powerhouse but is going to be ranked all year with the emergence of Demetrius Jackson and Zach Auguste.

In around five years, head coach Mark Turgeon and Maryland have reached stardom very unexpectedly. Being led by Melo Trimble, one of the country’s best players, certainly helps but this team will have a hole of Dez Wells missing who was the senior leader last year. New faces of top recruit Diamond Stone and transfer Rasheed Sulaimon will certainly help this team cement itself in this league. However, never count out Tom Izzo and Michigan State who made a Cinderella Final Four run last year with Denzel Valentine. Since 2008, Michigan State has only missed the Sweet 16 once which is great news, but has only won their conference 3 times in the same span which is why Maryland has a better chance early on. In Bo Ryan’s last year, Wisconsin will have big gaps missing in the absence of Frank Kaminsky and Sam Dekker but will most likely make the tournament in which they gave Kentucky its only loss of their season.

The Pac-12 is certainly looking stronger than it did last year and has many middle-of-the-pack teams led by Arizona, who have led the league consistently this decade. The only recognizable returner for this powerhouse is senior Kaleb Tarczewski who will definitely take his talents to the NBA, but astounding recruiting has kept this team relevant for another year. Perhaps one of the most highly talked about teams this season is the emergence of California as a possible dark horse Final Four contender. With the addition of Jaylen Brown and Ivan Rabb, this certainly seems possible along with taking the conference championship. Cal has been on and off in recent years with little success but their luck looks to change this season on a big scale. Even with UCLA’s Sweet 16 run last year, they are still looked upon as a weaker team who made a lucky run in a depleted region which makes them a pretender.

Of the power five conferences, this seems to be the most obvious and unbalanced. The Big East is slowly becoming weaker year after year as they hold onto Villanova and sometimes Georgetown to hoist them up rankings. Although both contenders should make March Madness this year, Villanova is the only lock which leaves them alone at the top in conference play. The bright spot for this league is the emergence last year of preseason player of the year Kris Dunn who could single handedly carry Providence to the NCAA tournament. Georgetown has not put together an impressive campaign since 2007 where they lost in the national semifinal game. This league looks very different with the loss of Notre Dame, Syracuse, Pittsburgh and Louisville, which leaves Villanova alone as a powerhouse to control this dying conference.

All three of these teams are unanimous picks this season to win their respective conferences, all weaker than the “Big 5.” However, Wichita State and Gonzaga have already cemented themselves as college basketball powerhouses for the time being, following a line of teams such as Butler, Creighton, or Virginia Commonwealth (VCU). Those two are locks to make the March Madness tournament and win there, but Valparaiso is a different team in that they will probably never be mentioned or ranked until March. What makes Valparaiso interesting is that they have the potential to be one of this season’s Cinderella teams who will crash brackets and make headlines when it matters, perhaps against Wichita or Gonzaga.