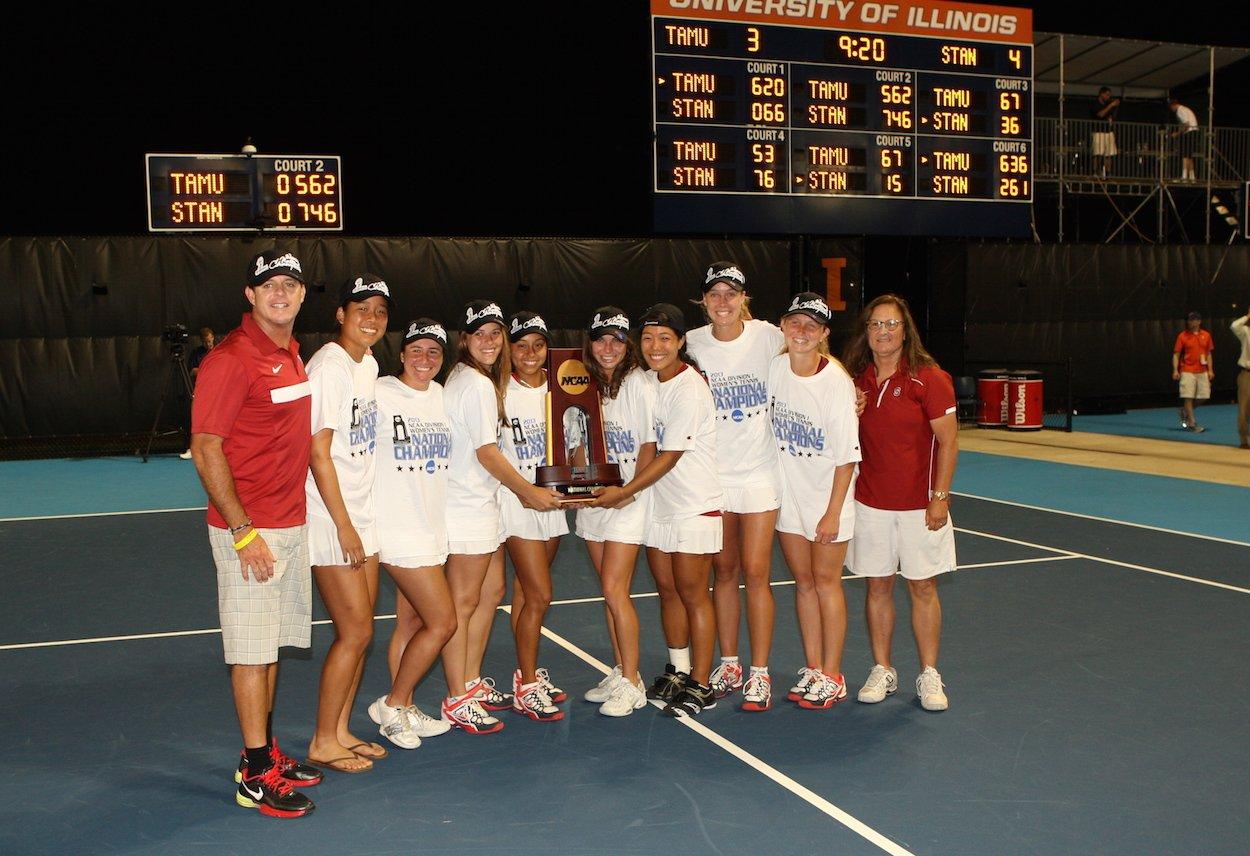 The tennis program at Stanford is the most successful of the university, with their 2013-2014 women’s team winning an NCAA. title.

Ethan Teo
Sports
November 20, 2015
Stanford University is best known for being one of the most academically competitive schools in the United States, but its athletic program is rarely recognized for its success and well-roundedness. Despite this, Stanford boasts arguably the strongest collegiate athletic program in the entire nation, having won the Division I Directors’ Cup in 2015 — an award that recognizes the most athletically successful National Collegiate Athletic Association (NCAA) university — for the 21st year in a row.

Stanford has won 107 NCAA team championships in 19 different sports throughout the program’s existence, which is the second most championships that any school has won behind University of California, Los Angeles, which has 112 championships under its belt. Additionally, Stanford athletes have earned a total of 476 NCAA individual championships — the most won by any Division I school.

Within Stanford’s entire athletic program, tennis seems to have had the most success, having won a grand total of 34 NCAA championships between the men’s and women’s teams. Stanford men’s tennis was in its prime in the 1990s, when Dick Gould was still the head coach. Mirror twins Bob and Mike Bryan, known as the Bryan Brothers, played for Stanford in the 1990s and went on to become the most successful doubles pair of all time, holding the World No. 1 doubles ranking jointly for a record consecutive weeks.

However, Stanford found success even earlier, most notably with tennis legend John McEnroe, who attended Stanford in 1978 before he turned professional and later won 77 professional tournaments in his career. Although Stanford has not won any championships since Gould’s retirement as head coach in 2004, it has remained elite under the guidance of John Whitlinger and ended most seasons with a winning record, with the exceptions of 2007 and 2013. Paul Goldstein has been the men’s head coach as of 2014 and was recognized as Stanford’s first Pac-12 Coach of the Year since 2006 after he led his team to a successful season. Led by elite sophomores Tom Fawcett, David Hsu and David Wilczynski, Stanford men’s tennis can expect to receive further recognition in years to come.

Stanford women’s tennis has been dominant since the beginning of its existence — from 1975 until now, the team has won 91 percent of its matches and 17 NCAA championships and has had 10 undefeated seasons, four of which current head coach Lele Forood has overseen. There is plenty of potential on the current roster — four of the 11 players are freshmen — but the player to watch this season will be junior Carol Zhao, who has won 88 percent of her singles matches. Zhao has also begun to compete professionally and climbed to a national rank of 247 over the summer — a rare feat for a college player, let alone a student-athlete handling Stanford’s academic rigor.

Historically, Stanford’s football team has not been all that successful. From 1950-2010, Stanford won the Pac-10 (now called the Pac-12) conference title only five times. However, the team has performed incredibly well as of recent years under head coach David Shaw — it won the conference title in 2011, 2012 and 2013 and finished in a close second in 2014. Stanford is on track to win the conference title again this year, and is nationally ranked among the top 10 collegiate football teams. Led by fifth-year quarterback Kevin Hogan, Stanford has a decent chance in finishing the season ranked among the top five teams. After Hogan graduates, Palo Alto High School graduate and current sophomore Keller Chryst will likely be Stanford’s starting quarterback and hopefully can extend the team’s recent successes for a few more seasons.

The team formed in the early 1900s and has consistently competed with the top swimming universities in the nation. The men’s and women’s teams combined have won a total of 16 NCAA championships. Katie Ledecky, 18-year-old phenom and world record holder in three events, plans to swim for Stanford this year. Ledecky also has 15 international gold medals under her belt, and is arguably the best swimmer in the world right now. Ledecky, in addition to being a record holder in multiple events, proved to be a threat in both short and long-distance events. With her skillset and Stanford’s exceptional coaching staff, Ledecky and the rest of Stanford’s swim roster are in a good position to have another successful season.

Stanford is perceived as a dark horse in athletics by most, but it is evident that this should not be the case. From tennis to football to swimming, Stanford has proven itself to be a force to be reckoned with and looks to continue its dominance in the college sports world in the coming years.