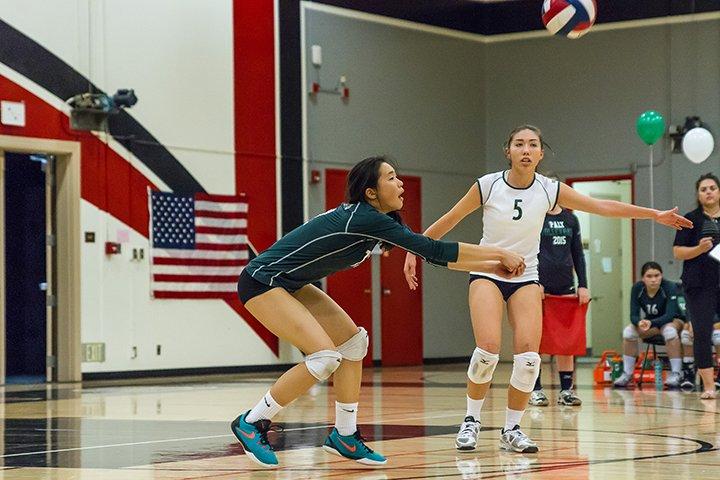 Sophomore outside hitter Chelsea Fan digs a hit from Los Gatos during the Senior Night match. The Lady Vikes lost in five sets.

During the league season, the girls had never played against Sequoia or San Benito.

“We do scouting reports of all the teams before every match, so we’re away of their stronger players and their hitting tendencies, even if  we haven’t actually had the opportunity to play against them,” senior captain Clara Chiu said.

In these reports, the team finds out which players are strong in each position in order to shut them down.

“[To shut down a stronger player] we usually, for our blocking, we commit on that player so both the blockers go up on that hitter no matter what to make it really hard for them to get a kill because we’ll just try and block them,” Chiu said.

When the Vikings played against Mountain View High School on Nov. 5, they lost 3-0, losing their sets by two, nine and five respectively.

“I think as a team we’ve been playing pretty well, but we can obviously do better,” junior Fiona Green said. “We just need to work together as a team and try our best during games.”

Many of the seniors were sad to lose on Senior Night, but they hoped to bring it back around during CCS.

“It was definitely disappointing [losing to Gatos on Senior Night] but I think that if we had to lose it wasn’t a bad way to lose,” Chiu said. “I still feel very everything that we accomplished that night. If you look at our record, they swept us in three sets in the beginning of the season, and even to take them to five and to lose such a close match by two points in the extra point, that’s really exciting.”

The girls were on a three game losing streak headed into CCS, which was broken during their first game of CCS.

“Our goals for CCS is obviously to make it as far as we can,” Chiu said. “I think we actually can definitely make it to the finals if we want it enough. This team has a lot of heart and we’re all really committed and we’re gonna try our best in every game like it’s our last and putting it all out there. So we just want to have fun and do our best.”