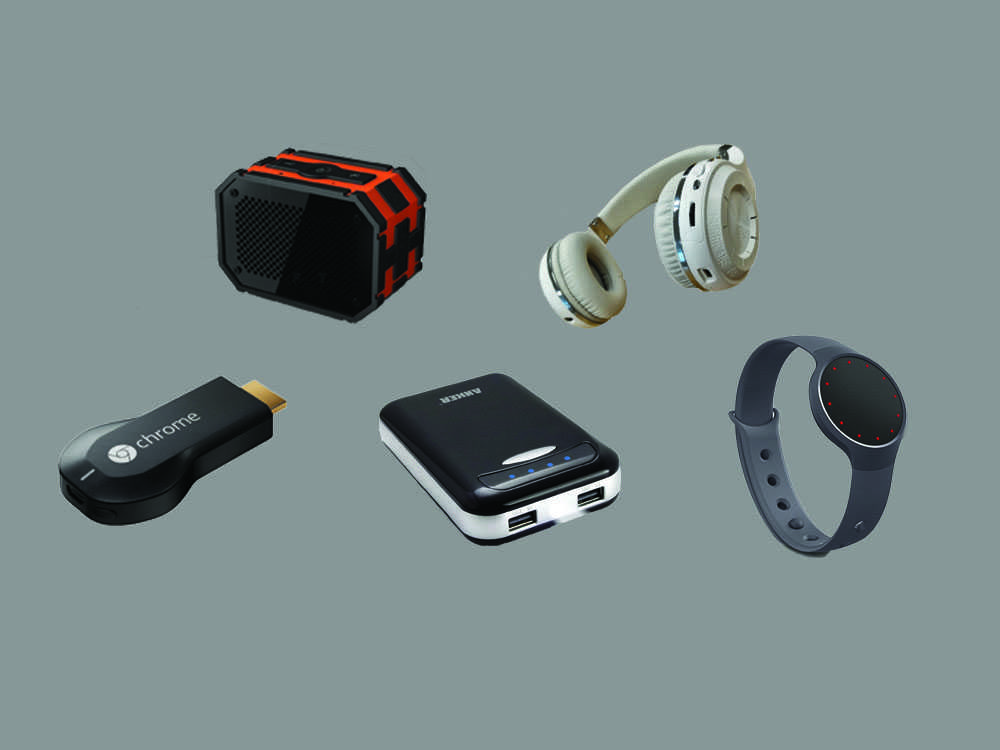 These electronic devices all serve as affordable and useful gifts for family and friends.

It’s always difficult to find the right holiday gift for family and friends. You want to get them something cool, but you do not want to go broke. To help you and your gifting struggles, here is a list of tech products that cost under $50.

On July 24, 2013, Google released its first digital media player, known as the Chromecast. Coming at a base price of $35, the Chromecast takes form as a dongle, unlike other digital media players, such as the Apple TV and the Roku. When hooked up to a TV’s HDMI port, the Chromecast will allow users to stream media content such as movies, pictures and music onto the larger screen. Users can then manage settings and streaming while the device is synced up to the dongle over Wifi. The Chromecast supports apps such as Netflix, Spotify, Twitch, WatchESPN and YouTube. This is especially useful for consumers who prefer their media consumption to be displayed on a large platform. A large platform provides a better viewing experience and can be shared with friends. Although the Chromecast does not have as many features as other digital media players, it does its job of streaming media content fairly well in a cheap and relatively compact package.

The 30-dollar Mpower Bluetooth Speaker is one of the most versatile bluetooth speakers you can find in the market. Mpower geared the product towards consumers who enjoy spending time outdoors. The speaker is rainproof, waterproof, shockproof and dunk proof (which means you can dance along to your favorite songs in the shower in the shower without any worries that it will break). Because the speaker is bluetooth, you do not have to worry about wires being tangled around your device. Not only does it act as a speaker, but it is also an external battery. Device users can charge their phone with a 1000 mAh battery (about a 60 percent charge for an iPhone). The Mpower bluetooth speaker is the best multifunctional speaker that won’t take a toll to your wallet.

If the Mpower Bluetooth Speakers 1000 mAh battery does not suffice, Anker built a cheap external battery that holds 16 times more of that battery. The Astro E5 holds 16,000 mAh battery (or about nine full iPhone charges) for $32.99. In a test with my iPhone, I lasted the entire week charging my iPhone using just the Astro E5. I did not have to worry about charging my device overnight or about my device running out of battery during the day. The Astro E5 can be easily stored  and also includes a built-in flashlight. There are two USB ports for two devices, with a micro USB between the two USB ports to charge the power bank itself.

Bluedio is one of the lesser known names in the headphones market, but it may very well be one of the dark horses in the industry. One of its newest products, the Bluedio T2 Wireless Headphones, comes at a price of $35. Compared to more well known brands that also produce wireless headphones such as Beats By Dre ($380), $35 is a steal. With a durable plastic, leather and metal build, the T2s come with a premium build. The T2s also produce very good sound quality for their price, with a built in equalizer to change volume settings and noise cancellation to block out outside noise.

Know a fitness fanatic who doesn’t have the money to buy a fitness tracker? The Misfit Flash is a durable and cheap alternative that goes for $29.99 on websites such as Amazon or Adorama. The Flash takes form as a plastic disc that can be attached to a clip or wristband. With a companion app that you can download on the App Store or Google Play store, the Flash tracks your daily step count and how much sleep you are getting every night. The plastic disc holds a 12 LED lights in a circular fashion that indicates how far you have gotten to attaining your daily step goal (six out of the 12 LED lights are full, you are halfway done with your goal). The Flash is waterproof so you can shower with this too and lasts for a full six months before needing battery replacements. Though the Flash lacks a heart rate monitor and a premium build, a fitness tracker that not only functions well but is also waterproof is difficult to find at this price.