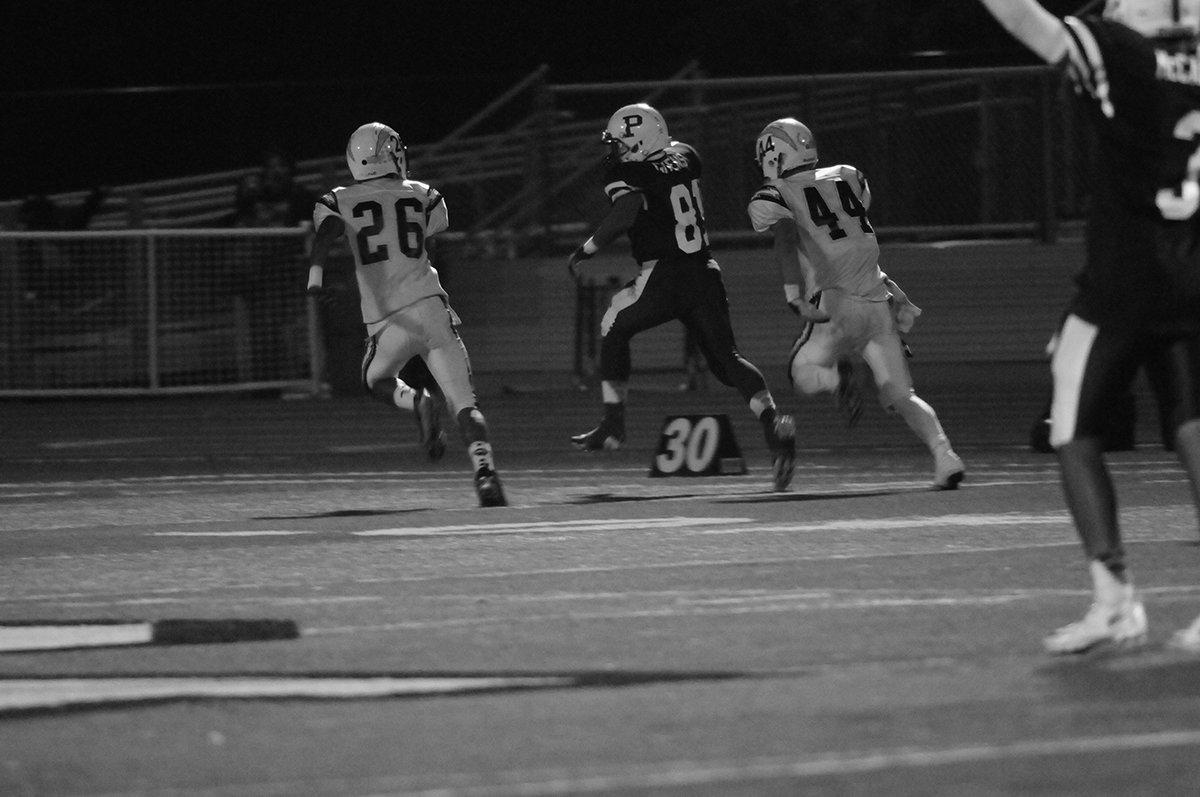 Senior Eli Givens, who was scouted by St. Francis, goes for a touchdown against Wilcox.

Across the Bay Area, Palo Alto High School is recognized for having an outstanding athletic program. Titles won by Paly athletic teams include California Interscholastic Federation State Championships in football Division I state championships in 2010, volleyball Division I state championships in 2010 and 2011, boys varsity basketball in 2006 and countless Central Coast Sectionals (CCS) titles in other sports. However, many people frequently associate its athletic excellence with Palo Alto High School’s status as a public school.

But to what extent do the privileges of private school affect athletic competition?

Public schools have the potential to attract the best athletes because open enrollment allows any student in the geographic area to attend or transfer into the school. However, an increasing number of private schools are emulating the college recruitment model.

This has led many to debate whether or not the two different groups of schools can compete with one another as private schools are not limited by the same restrictions public schools face. In the Central Coast Section (CCS), Paly belongs to the Santa Clara Valley Athletic League, which consists of a group of public schools within the Santa Clara Valley geographic location. On the other hand, the West Catholic Athletic League consists of a group of private schools that range from San Jose to San Francisco. But teams often play outside of their league before taking on inter-league schools. In higher conference sections, such as CCS and states, schools compete again against schools outside their leagues.

Coco Lovely, a senior who has been on the girls varsity basketball team for four years, has experienced the inequity of private school recruiting first hand.

“They are able to get the best athletes from their area which makes them better than all the other public schools in the area,” Lovely said. “There were a few girls in the Class of 2018 who were supposed to come to Paly and play basketball, but they were recruited by Pinewood, so they went there instead.”

Many private schools have the ability to pay for an athlete’s tuition, giving students a “free alternative to public schooling. This advantage takes money out of the equation, leaving the athlete to compare a private school’s facilities, academics and athletic program against a public school.

High school recruiting is slightly different from college recruiting in the sense that the athlete still has to try out for the team. Additionally, the student does not get offered a scholarship up front. However many students who are invited to play for a private school team receive scholarship or financial aid money if accepted.

Senior Eli Givens is an example of a student athlete who has been sought after by multiple schools for his athletic abilities in both hockey and in football. In the summer after eighth grade, he was approached by a hockey coach from Bellarmine College Preparatory. His sophomore year, a football coach from Saint Francis High School contacted him as well.

“I was just trying to play,” Givens said. “It’s different from DI college recruiting because I still had to try out. I guess you could compare it to being a walk-on or going to a play for a DIII school, where they can’t offer you to play, but if you try out and make it, they can give you a scholarship.”

High school recruiting is not a term that can be used to officially describe the process private schools employ to attain high-caliber athletes. However, these types of schools rely heavily on the use of tools such as money and lack of geographic restrictions to bolster their athletic programs, ultimately giving themselves an advantage over their neighboring public schools.