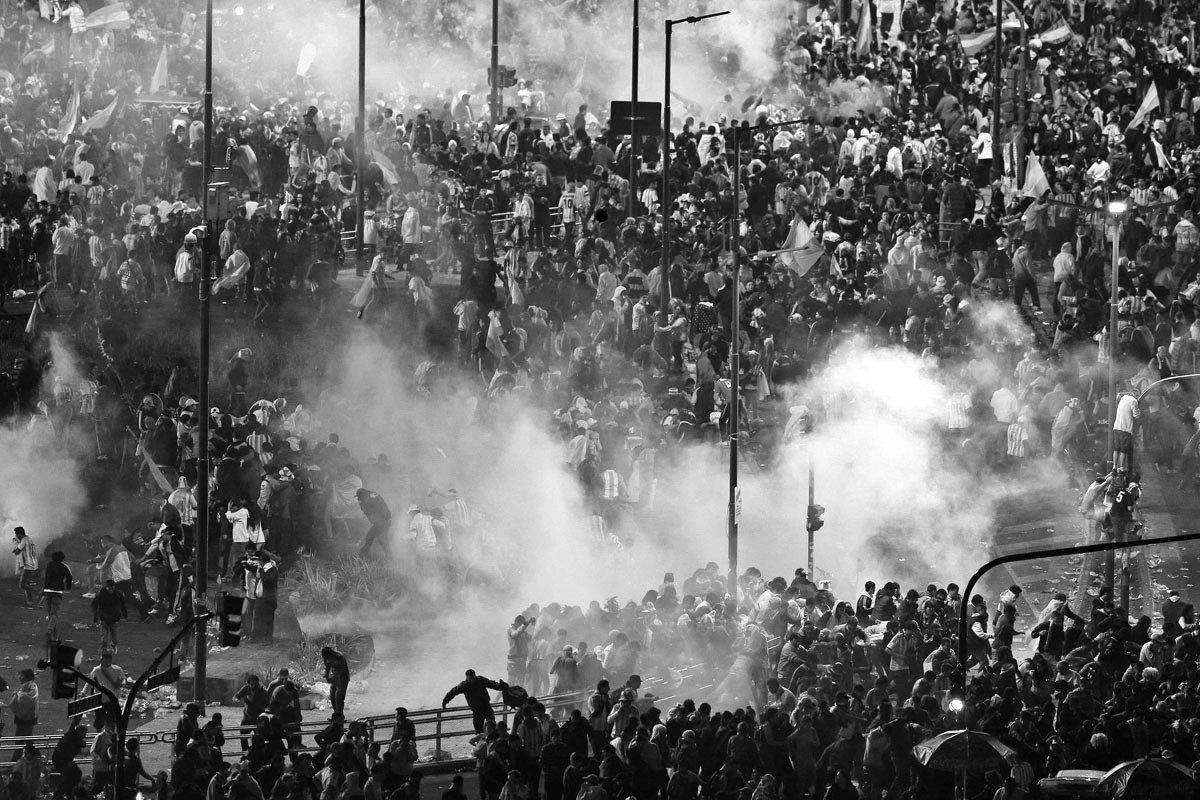 After the Argentinian loss in the 2014 World Cup, fans took to the street in protest.

Hooligan culture around the world

Screaming fans, packed together like cattle in the stands, encourage their team with cheers and hurl obscenities at the opposition. Outside the stadium, two drunken fans of rival clubs throw punches after a fiery argument over which team has the better keeper. Soccer hooliganism resulted in nearly 2,500 arrests in the U.K. in 2013, with charges ranging from violent disorder to racist chanting to possession of an offensive weapon.

What exactly is a hooligan? Football hooliganism, less common in the United States,  is described as any sort of destructive or harmful behavior displayed by an overzealous supporter of a football club or team. Hooligans can be found anywhere there are 22 players on the field, a ball and two goals. Hooligan culture is especially prevalent in  England, Argentina and Turkey.

It is likely that England, which many consider the birthplace of soccer, is likely also the birthplace of hooligans. In fact, hooliganism was first recorded in England in the 1880s. Rabid fans formed groups, united by their club allegiance. Arsenal supporters dubbed themselves “the Herd,” Manchester United fans were “the Red Army” and Burnley followers became “the Suicide Squad.” By the 1970s these gang-like bands of fanatics became established, organized “hooligan firms,” almost mafia-like in structure and influence. In fact, the term “firm” is derived from British slang for a criminal gang. These firms are certainly gang-like in their violent and bloody histories. In the Heysel Stadium disaster of 1985, 39 Juventus fans were killed and 600 more were injured. A throng of Liverpool hooligans pressed against opposing Juventus fans, and a retaining wall collapsed on top of hundreds of spectators. Following this heinous event, English clubs were banned from international competitions until 1990, with an additional year of suspension for Liverpool. It’s no wonder that hooliganism is sometimes called “the English disease.”

Gang violence and sports collide again in Argentina. Since 1924, there have been over 300 soccer related deaths in Argentina. Most of these killings are conducted by barra bravas — groups similar to English firms, but even more organized and deadly.

The Boca Juniors, an immensely popular Buenos Aires based team, have perhaps the biggest barra brava element of any club. Boca Junior hooligans are responsible for dozens of shootings and stabbings. Recently, in a match between the Juniors and their bitter rivals, River Plate, Boca hooligans used aerosol cans to spray an eye irritant at River Plate players. The game was called off.

When Argentina plays at an international level, the violence escalates. After a 1964 Olympic qualifying match against Peru in Lima, 300 people were killed and 500 were injured in a massive riot.

Hooligan groups in Turkey are highly organized, have elected leaders and are often comprised of knife bearing street fighters. However, most groups in Turkey follow a “racon,” or code of conduct that states that, in hooligan brawls, the intention must always be to injure, not kill. Stabbings must be made below the waist, and guns should be used only when firing into the air to celebrate.

Of course, these racons have done little to prevent widespread hooligan violence in Turkey over the years. Recently, to stem the flow of beatings and stabbings, the Turkish Football Federation increased security at major games (8,000 policemen, stewards, and officials at the Turkish Cup Final) in addition to devising harsher punishments for acts of hooliganism.