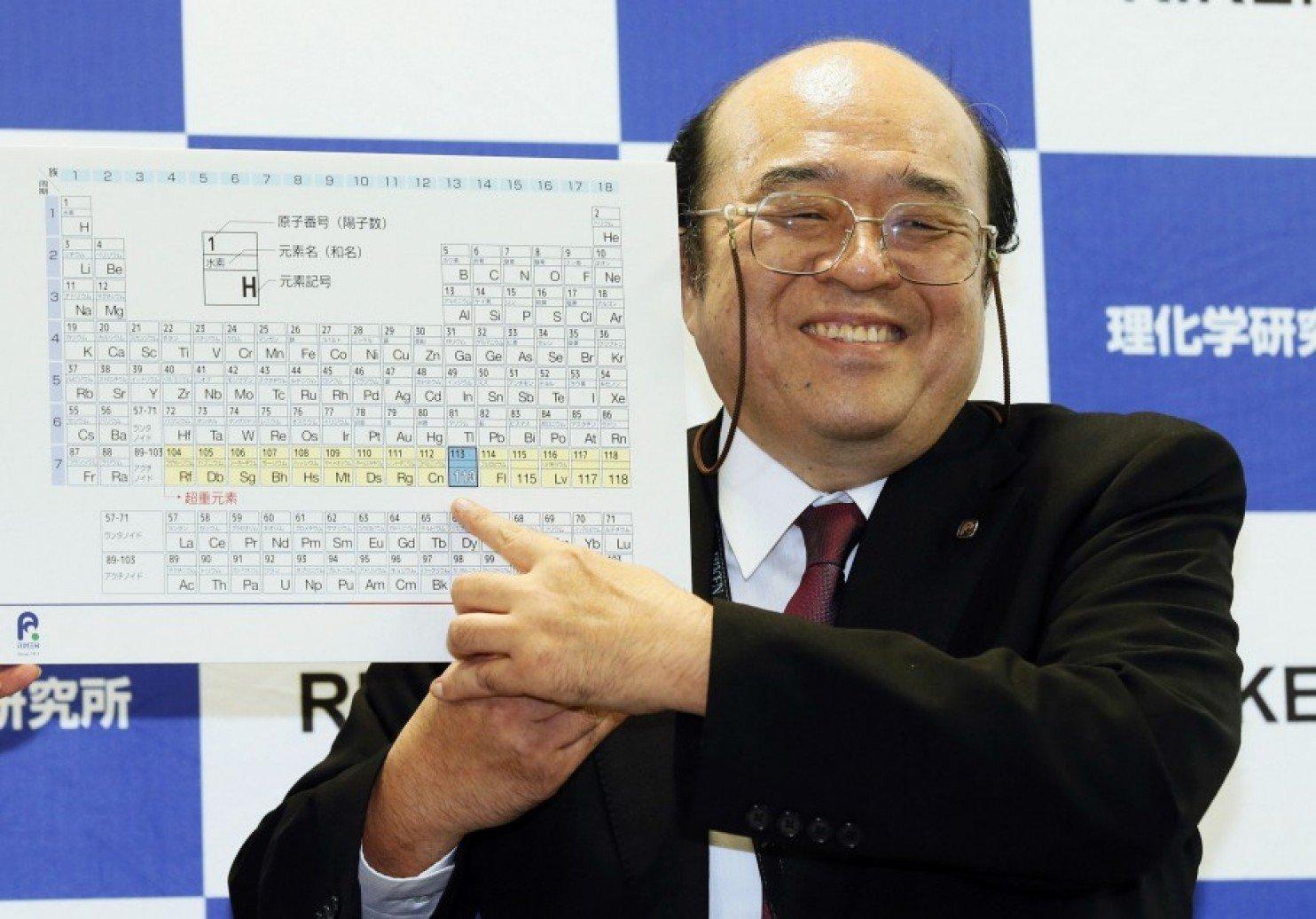 Kosuke Morita, the head researcher of the Japanese team, poses with updated periodic table featuring his discovery of element 113.

Kiran Misner
News
January 28, 2016
The seventh row of the periodic table has officially been filled after a discovery of four new elements from 2011 was verified by the International Union of Pure and Applied Chemistry (IUPAC) on Dec. 31.

The monumental discovery of the elements with atomic numbers 113, 115, 117 and 118 was recently found by scientists from Russia, Japan and the United States. The Riken Institute from Wako, Japan made history after finding element 113, making Japan the first Asian country ever to discover and name an element. The duo of teams from the Joint Institute of Nuclear Research in Dubna, Russia and Livermore Laboratories in Livermore, Calif. receive the credit for discovering elements 115, 117 and 118.

All four of the elements were created synthetically in a lab, meaning that they cannot be found in nature. Due to their molecular structures, the elements are unstable and only last a few fractions of a second before decaying into different elements.

The elements were created using a particle accelerator, a machine which fires charged particles close to the speed of light. The particle accelerator shoots out the nuclei of two different elements, making them slam against each other. When the atoms collide, the nuclei will form a new element for less than a second before undergoing radioactive decay, a process which takes apart the synthetic element.

While the finding of these element has filled the periodic table with elements,  Kosuke Morita, the head researcher of the Japanese team, says that his team will not stop research.

“[We want to] look to the uncharted territory of element 119 and beyond,” Morita said in an interview with The Guardian.

The next order of business for these research institutes will be to establish names for new elements. These elements previously had placeholder names and predicted properties on the periodic table of elements. Because of restrictions the IUPAC has placed on naming elements, each of the four will be named after a mythological concept, a mineral, a place, a property or a scientist.

While the discovery changes the way the periodic table is formatted, the finding will not change chemistry classes at Palo Alto High School — at least for now.

“For us at Paly, the discovery won’t really affect us because the elements are so radioactive that they would only last a few seconds, “ Chemistry teacher Samuel Howles-Banerji said. “Plus, we had already known of these elements, but their names and properties were just unidentified.”

Howles-Banerji also believes that the discover will not bring another outburst of more discoveries.

“While the finding of new elements is good for science, it won’t propel more discoveries to happen because other elements don’t last for a long time and are hard to find,” Howles-Banerji said.

Instead, Howles-Banerji hopes that the discovery will teach a valuable lesson to students and younger aspiring scientists.

“Often the way science is taught, [teachers] make it seem that there’s only answer or way, but that’s not true,” Howles-Banerji said. “Science is not fixed. It’s dynamic and always changing.”