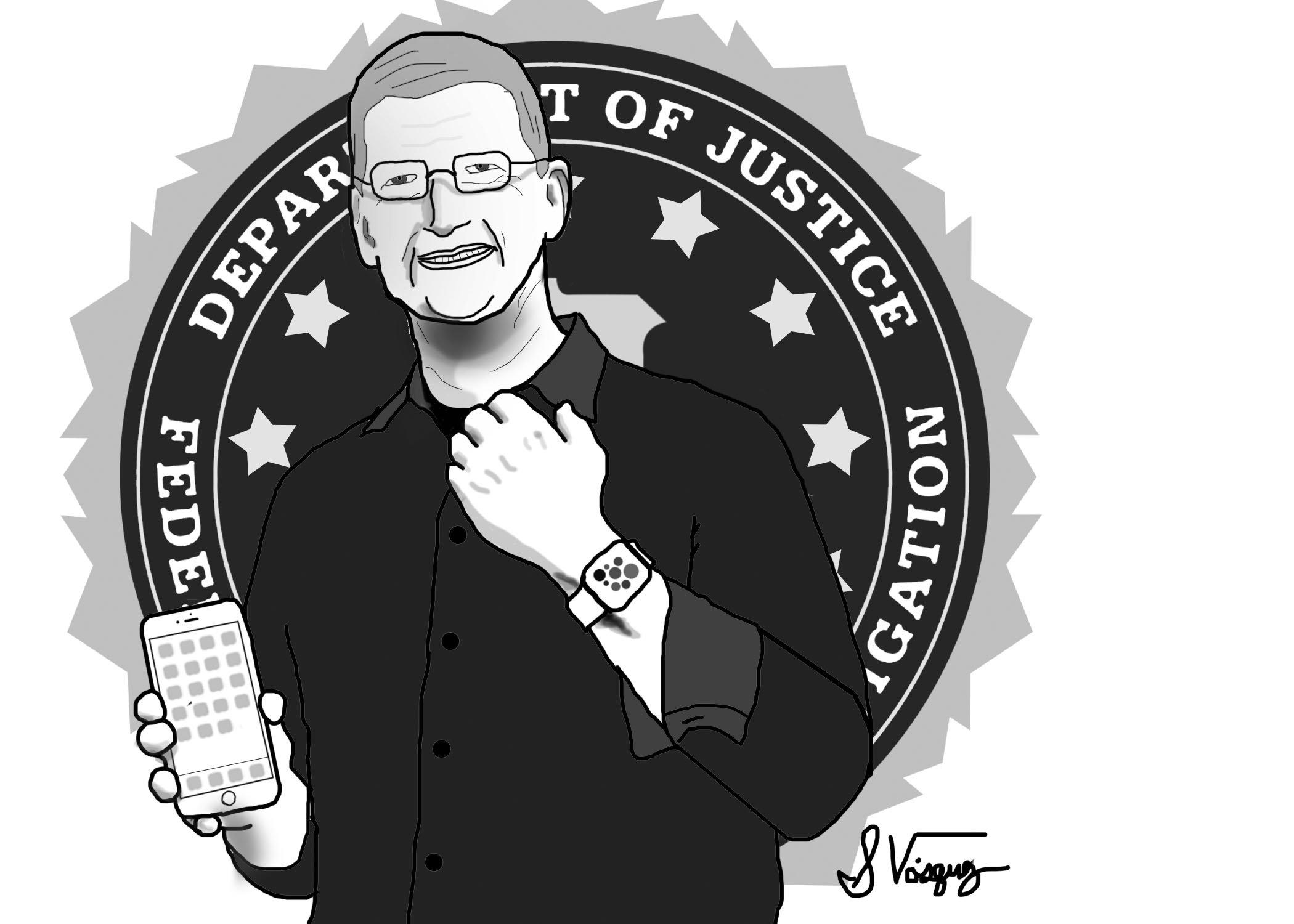 Gillian Robins
Opinion
February 24, 2016
Today Apple will give its official response to the Justice Department’s motion to comply with the Federal Bureau Investigation (FBI) in decrypting the iPhone used by Syed Rizwan Farook. Farook was one of the terrorists involved in the San Bernardino, Calif. attack in December that killed 14 people. If they choose to comply with the court’s order, Apple would create a backdoor operating system that would allow FBI investigators to break into the iPhone 5c that belonged to Farook and gain evidence critical into the case. It would be advantageous for Apple to assist the FBI. Farook’s iPhone is a pivotal piece of evidence in the case, and when an attack of this level is concerned, it is imperative that all means of gaining evidence should be used in order to further the fight against Islamic State of Iraq and Syria (ISIS) and make American lives more secure.

Apple CEO Tim Cook released an open letter to customers arguing the right of privacy and how creating a backdoor would undermine both the importance of encryption and Apple’s core values. Cook argues that by creating this new operating system to use on Farook’s iPhone, it will create a “master key” potentially used to access any iPhones if it lands in the wrong hands. However, the government is being very specific in their request for the use of the software; it is asking for this software for this particular case. This is not the phone of an average Apple customer; this is the phone of an Islamic extremist who is in communication with an organization that poses an imminent threat to the American people.

Because the San Bernardino attack was an act of terrorism, the FBI needs to do everything in its power to investigate the incident and prevent future ones from happening. If we have the tools to access information that would help prevent terrorist attacks, they must be utilized. People fear that this software, if created, could be used to hack other peoples’ phones.

This is a precedent that needs to be set. The phone most likely contains information imperative to the anti-terrorism agenda, as Farook very well may have communicated with members of ISIS.

When an attack of this level is concerned, it is imperative that all means of gaining evidence should be accessed in order to further the fight against ISIS and make American lives more secure.

Now more than ever, terrorist organizations are employing social media such as Twitter and Facebook to publicize their ideologies, then going dark encoding messages. By cooperating with the government, Apple would be responsible for a massive step in the right direction for the fight against terrorism. According to NPR, ISIS jihadists take to messenger apps like WhatsApp and Telegram to encrypt texts. The FBI currently possesses data from Farook’s iCloud account up to a month and a half before the shooting, but investigators believe the rest of the data on the iPhone may contain photos and WhatsApp messages between Farook and other jihadists. Going dark is the biggest intelligence obstacle for government officials, and having access to Farook’s phone would expedite the process of preventing the next terrorist attack and fighting ISIS.

Although the government has impeded on citizens right to privacy before, they are transparent in their actions to use the software for one purpose.

The FBI does not have hidden intentions of overreaching and corrupting people’s right to privacy. They simply want an opportunity to guess the password correctly and gain all the evidence they can in the phone. Given the severity of the situation, Apple needs to help decrypt the iPhone. This is a critical step in the fight against anti-terrorism that needs to be taken. As only Apple will have access to a backdoor software, they have complete jurisdiction over how and when it is used. The anti-terrorism cause is elusive, and terrorism could get worse in the future. With the threat of Islamic groups imminent and so digitally-based, it is extremely important for Apple to comply with the government, and take all the potential steps to stop terrorism.