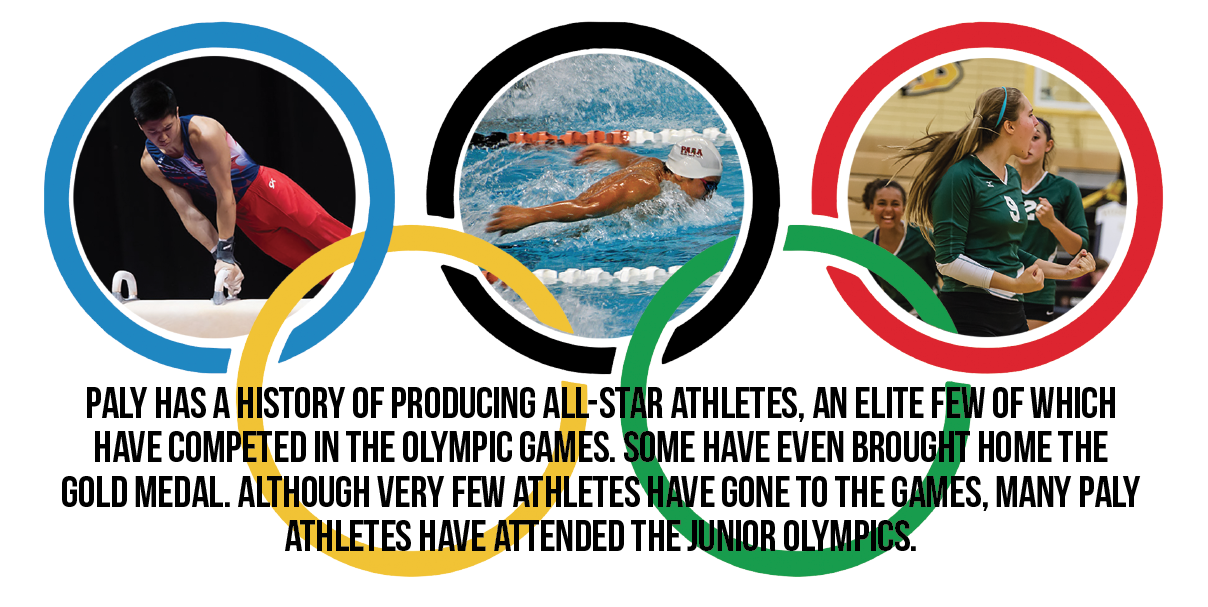 Paly has a history of producing all-star athletes, an elite few of which have competed in the Olympic Games. some have even brought home the gold medal. Although very few athletes have gone to the Games, many Paly athletes have attended the Junior Olympics.

Junior Bennet Huang’s Instagram is inundated with pictures of him doing handstands, teetering on the edge of giant rocks and posing with a group of highly toned teenage boys, who form the U.S. Junior National Men’s Gymnastics team.

Huang started taking gymnastics classes when he was only four-years-old. Two years later, he began competing. Now, a decade after his first competition, Huang is a member of the U.S.  Junior National Men’s Gymnastics team.

“It had always been my dream to make the Olympic team, and being able to be a part of the Junior National Team is certainly one of the steps to it,” Huang said. “It has been a very cool experience to represent the U.S. at international competitions.”

Huang’s training routine is normally as laborious as his workout regimens. Huang’s daily training begins with a 15-minute warm up, when he stretches his muscles in preparation for the rest of his performance. He then moves on to completing two workout routines for each of the four to five events, focusing specifically on areas of difficulty in order to perfect them. Finally, Huang finishes his workout with 30 minutes of strength and conditioning.

The local club swim team, Palo Alto Stanford Aquatics (PASA), is known by many to breed high-performing swimmers, something the club takes great pride in. This is evidenced by the extensive list of alumni that swim at elite universities around the country, as well as entries on the U.S.A. Swimming Top 100 and Top 10 list, all located on their website. Junior Alex Liang has been swimming with the club since he was 5 years old. As a small child, his love for the sport was pure and warranted only by the pleasure of participating in it.

“As a little kid, you just want to go out there and have fun,” Liang said. “But as you get older, you realize what potential you have. You try to be the best.”

According to Liang, there is one big competition each season, and occasionally two in the spring. In addition to the four big PASA competitions, Liang will also compete in the most intense swim meet in the United States: the Olympic Trials. The Olympic Trials for mens swimming will take place this summer in Omaha, Neb.

Liang is hoping to compete in the 2020 Olympics in the 400 meter individual medley. Even if he does not qualify this year, Liang plans on training for the 2024 Olympics while attending college. According to Liang, there is a small chance that he will qualify for the Olympics this round, as he is still considerably young in the sport.

According to the U.S.A. Swimming website, the Trials are broadcast live on NBC every night for eight days and nights. In 2012, a 164,000 fans attended the Olympic Trials, which also took place in Omaha, Neb. The trials were nominated for the acclaimed “Sports Event of the Year” by the Sports Business Awards.

On the PASA swim team, Liang is one of 15 kids training for the 2020 Olympics in Tokyo, Japan. According to Liang, practice is only slightly different for the swimmers pursuing the Olympic Games, in comparison to others.

“We just train with a little more intensity, focus [and] precision,” Liang said. “We are more attentive to small details.”

According to Liang, around 1,000 of the nation’s best swimmers compete for places at the Olympic games.

“You have to [place in the] top two in your event [to be on the Olympic team],” Liang said. “For the freestyle events, like the 100 and 200 meter freestyle, you can be top six because they are relays.”

PASA’s frequent and hardcore practices attract the most dedicated swimmers, making it a prime platform for kids to get noticed by college recruiters. Besides Olympic training, Liang is being scouted by top-tier colleges, including Stanford, Duke University, Michigan and Harvard University.

For Passerello, swimming and volleyball acted symbiotically to increase her performance, supporting her physically in different aspects.

“I had strong legs from swimming that helped me jump in volleyball, and a strong core from volleyball that helped in swimming,” Passarello said. “As of last year, when I was doing both swimming and volleyball I had nine practices a week, and that was tough.”

Passarello believes that training for the Junior Olympics is very similar to training for any other competition in both swimming and volleyball.

“Training for the Junior Olympics is not much different than regular practices — for swimming your shave and taper will be arranged accordingly and in volleyball you just keep training hard like you have been all season.”

Competition at such a high level requires great passion and determination from athletes in order to sustain the intense demands on their bodies and their time. Hopefully, hard work will prove fruitful and push these ambitious contenders  to make  it to the Olympic Games.