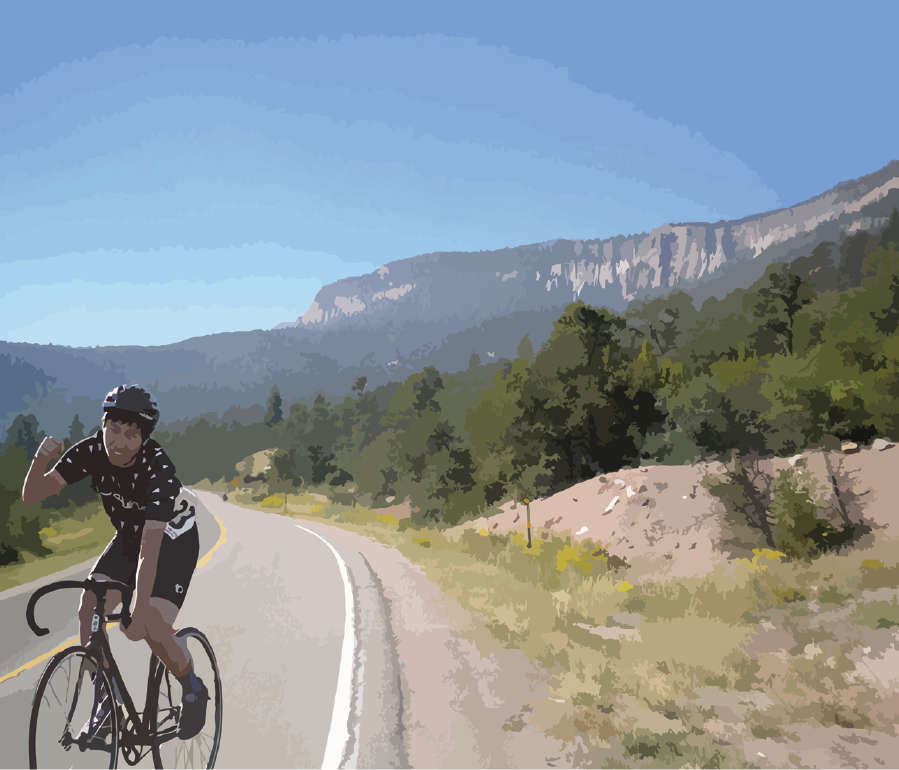 The fight for Paly cycling

A group of kids go riding during a normal weekend. While most people wear whatever comfortable clothing they want when they bike, this group of kids is wearing skin-tight suits and shoes that attach to the pedals. Balancing school and sports is always a difficult task, but when that sport is not even offered as a school activity, it can be even more challenging.

Juniors Xander Koo and Alex Gao of Palo Alto High School and Henry M. Gunn High School respectfully have joined together to petition to add cycling to the list of sports offered in the Palo Alto district. Koo has been working to make cycling a sport since the first semester of the 2015-16 school year. He started working with Gao in case the district would rather offer the sport as a district sport instead of individual school teams.

“Gunn has a group of around 15-20 people interested in it becoming a sport,” Gao said. “Right now we ride and train together as friends for the race season this spring. We’re talking to [Superintendent Max McGee] about having it become a sport, as both members of Paly and Gunn are interested; things move really slowly in the district, so we haven’t gotten much word.”

Other schools such as Mountain View High School and Los Altos High School have also expressed interest in starting a sport, and Gao thinks that his joint team proposal will succeed if enough people sign up. Currently the training situation for the potentially district-wide sport has complicated issues with safety and liabilities, but most of the students in the Bay Area have already met through club teams. While there is already a junior league team offered to minors, Gao and Koo hope to receive any form of cycling offered at their respective schools.

“I think it all depends on what the district hopefully decides, and what is most convenient for the district,” Gao said. “We train together as friends’ due to liabilities with association with the schools, but right now we ‘ride together with friends’ as separate schools.”

As well as going through administration and the logistics of the sport being sponsored by the school, the possibility of a PE unit centered around cycling instead of an actual sport offered by the school is also a disputed topic.

“Taking on the challenges of biking alone is usually hard and it’s easy to give up but to have a community within school that is open to spending time with their peers to bike will build a stronger connection between students.”

“As far as I know, they’ve talked about it at the PE steering committee and Athletic Advisory Committee,” Gao said.

While to an average person it seems that cycling is a more relaxed sport, it requires a large amount of stamina and strength to be able to ride on all levels of incline at any speed necessary to overcome fellow competitors. Koo says that a student must also be a well-rounded athlete in order to keep up with the standard level of excellence.

“It requires a lot of aerobic capability, especially for sprinters, in which case you would need a lot of explosive power,” Koo said. “For climbers you would need to be pretty small and have good stamina.”

Many cyclists go to several different tracks around the Bay Area primarily utilized by racing minors. The Hellyer Velodrome in San Jose would be used as their competing location as well. Both Gao and Koo believe that potential cycling competitions would work in a similar fashion to cross country — it would be organized by invitationals between two or more teams at a time.

“There is a league for juniors 18 and under racing in California, so we would probably race there,” Koo said. “The basic form is a race with all teams so it would be sort of like how cross country works with invitationals.”

The Bay Area has many cycling clubs where the boys have met others who share their same passion, but struggle to find the time for such a complex sport with expensive materials involved.

Koo speculates that the reason the administrators are questioning the validity of the sport may stem from the risk factor and possible expenses that would cut into the already tight budget for sports.

“There are a lot of liabilities considering it’s a high risk sport, and there’s also a barrier in terms of monetary cost since bikes cost money and raceworthy bikes are expensive,” Koo said. “There’s a lot of equipment involved.”

The bikes might be expensive and the risk might be high, but Koo stands with the claim that the sport is in high demand and has valid claim for becoming a school-sponsored sport. The fast-paced competition and the bonds between the friends he made along the way make it all worth it, according to Koo.

“[Cycling] is definitely a legitimate sport, and it would be good for interested cyclists to have a way to go out and compete,” Koo said. “Also there are quite a few interested people, at least within my social circles.”

Alex Wang, another Paly junior interested in the possibility of implementing a cycling team at Paly, agrees that the bonds created through cycling pushes others to keep going and improving.

“Taking on the challenges of biking alone is usually hard and it’s easy to give up but to have a community within school that is open to spending time with their peers to bike will build a stronger connection between students and make cycling a lot more accessible to students.”

Although Koo competes in the sport as a hobby, it requires a good amount of work and solid technique to keep up with the other cyclists.

“The skill level is relatively high I think,” Koo said. “I’m definitely not the best cyclist  — there are others at Paly and Gunn who are a lot more experienced than me — but I guess it’s more of an interest that I want to continue pursuing.”

The biggest reason that most people are drawn to the sport of cycling is due to the rush of going down the cycling track at speeds of up to 25 miles per hour by professional standards. Cycling is a fast-paced sport with little room for error, and although Koo appreciates the sport for the high stakes and close friends, he started participating in the sport for a more meaningful reason.

‘Being myself, a scrawny Asian kid, it’s kind of difficult to do a lot of mainstream sports just because of my size disadvantage. But I felt the thrill of going really fast was something that appealed to me, so I’ve stuck with it until now.’’’

“My late friend Harry Lee got me into cycling around freshman year,” Koo said. “He gave me his old road bike and we went on a few rides. He was the one who actually got me interested since he was always talking about bikes and cycling.”

Koo continues to participate in the sport to honor old friends and to strengthen bonds with the friends he has made along the way. Another benefit to doing cycling is its inclusivity to all body types makes cycling applicable for any type of athlete; while one teen excels at sprinting, another teen does better at climbing.

“Being myself, a scrawny Asian kid, it’s kind of difficult to do a lot of mainstream sports just because of my size disadvantage, Koo said. “But I felt the thrill of going really fast was something that appealed to me, so I’ve stuck with it until now.”