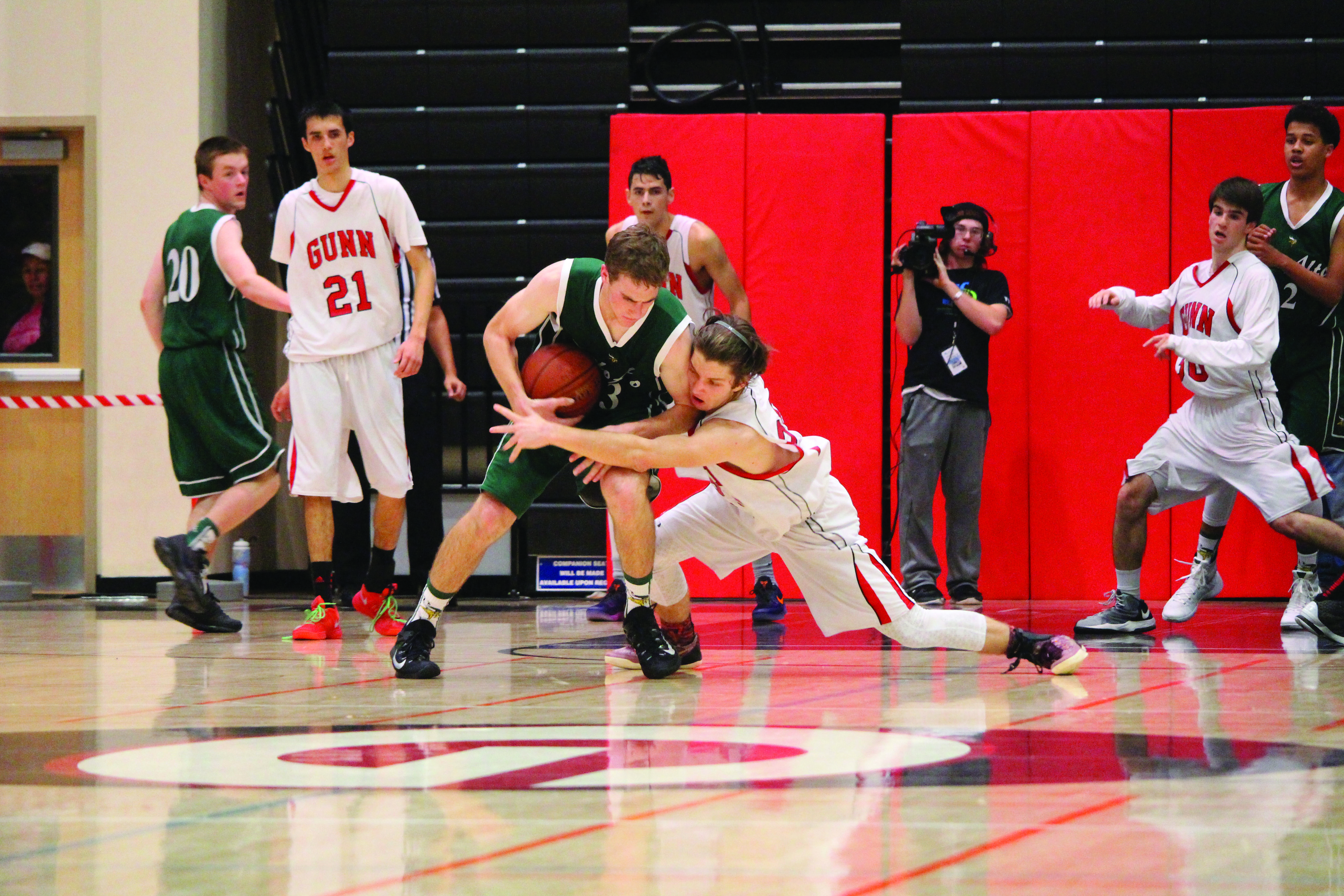 Senior Justin Hull fights for a rebound against a Gunn player; the Vikings lost 59-72.

Gillian Robins
Sports
February 25, 2016
On Feb. 27, the fourth-seed Vikings will play their first game of Central Coast Section (CCS) Playoffs in the quarterfinals after hard losses.

The seemingly omnipotent Vikings fell on Jan. 29 to the Titans by a score of 72-59 in a battle of blood, sweat and tears. Before the game, the Viking crowd lightly taunted Henry M. Gunn High School, gaining no response. Although their attire was quite loud — most students wore wacky clothing — Gunn fans sat quietly up until the 10th point as part of “Silent Night.” At that point, they exploded with noise and continued to be zealous and loud throughout the game. Across the court, Palo Alto High School students were also packed in the stands, sporting patriotic apparel matching the noise.

Paly missed shots and suffered from ineffective ball possession — off its game from the get-go. Gunn was able to rack up points near the basket.

“I think that we could have passed a lot better,” sophomore Spencer Rojahn said. “We turned the ball over way too many times, and, in order to win these big games, our team needs to limit the turnovers.”

The Titans rapidly gained on the Vikings in the first quarter with a score of 12-22. In the second quarter, the Vikings picked up their game in an attempt to close the deficit, but they fell short, entering halftime down 26-41. A large portion of the points Paly scored were from foul shots.

Much to the dismay of the crowd, about five minutes into the third quarter, Paly junior Miles Tention fell to the floor, afflicted with back spasms. This was especially unsettling because Tention was the star player of Paly’s last game with Gunn. After lying there for a few minutes, Tention stood up and did not play the rest of the game. Later that night Tention posted on the Paly Sixth Man group, informing students on his condition.

“Being hurt was not an acceptable excuse for my play,” Tention said in his post. “And I am sincerely sorry.”

Going into the fourth quarter, the boys were down 54-39. Following Tention, a Titan suffered an injury. The quarter was highlighted by the two three-pointers from sophomore Spencer Rojahn. The final score was 72-59.

The Vikings had prepared to shut down Gunn’s star player , Alex Gill

“In practice before the game, we made sure to work on stopping Alex in the open court,” Rojahn said. “We didn’t accomplish this in the game.”

The Vikings took on Fremont High School on Feb. 6. The boys stayed strong through the fourth quarter, winning the game 54-44. Tention sat this game out due to his injury, it did not prove to be too much of a hindrance. The boys faced Wilcox on Feb. 17 and claimed victory by a score of 70-60.

A tear or two were shed on Feb. 19, as it was the boys’ Senior Night; against Los Gatos High School. The teams played evenly throughout the entire game. After the first quarter, the boys were losing closely at 16-15. Junior Ethan Stern played superb defense, intercepting passes with careful aggression. The Vikes ended the half up 29-26, and  Gatos caught up with a tie score of 40-40 at the third quarter.

During the fourth quarter, things started getting intense as the boys gained momentum. Within the last minute, Gatos increased their lead to three after making both foul shots, despite the aggressive barking from the Paly crowd. As the clock was winding down, Rojahn and Tention both desperately tried for three-pointers in quick succession, sadly to no avail. The Vikings lost 50-53.

The team is looking forward to the CCS playoffs because of the improvement seen over the course of the season.

“I think we’re all excited about Playoffs and have been playing much better towards the end of the season,” senior Justin Hull said. “So we feel prepared and ready to make a run at it.”