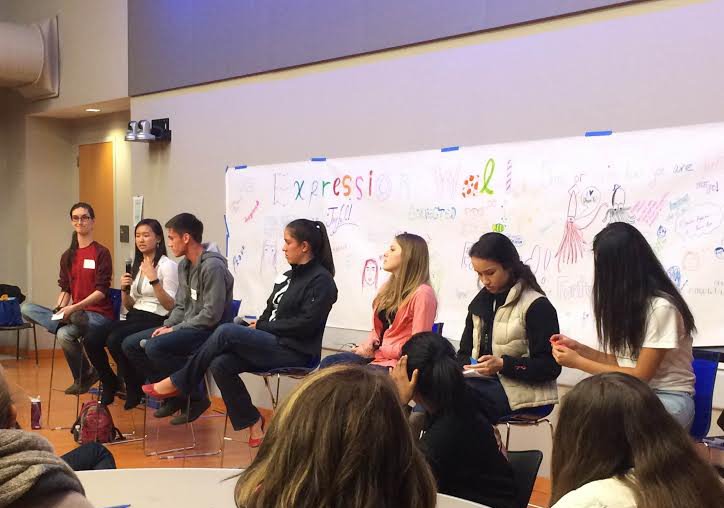 During the event, teenagers were invited to participate in dialogue circles that emphasized various youth challenges. Dhara Yu, a member of PAYC and a junior at Palo Alto High School, helped to organize the event.

“There were five different groups, each of which had a different area of discussion and were lead by a student facilitator as well as an adult facilitator,” Yu said. “The objective was to just kind of discuss the topic, and the topics were dealing with stress, building strong relationships, tackling mental illness, helping a friend in need and daily life choices.”

During the discussion circles, parents and educators were able to participate in a workshop designed by PAYC to provide support for parents in the community whose families have been affected by issues teens face. PAYC decided to host the event following the tragedies at Henry M. Gunn High School last school year. Elinor Aspegren, PAYC president and Gunn senior, wants the group to inspire people to move forward rather than live in the past.

The point of this primarily was to encourage honest and open dialogue.

“We really wanted to promote resilience and empathy, … move forward and talk about struggle, like how you get over struggles and how you move past struggles,” Aspegren said. “That’s kind of why we started this forum, because we need to focus more on moving forward. There are several people who are still dealing with the suicides from last year and we wanted to talk about moving forward from that event rather than staying stuck in the past.”

Another major problem PAYC found with the Palo Alto community is the absence of student voice in student well-being conversations. The forum was the group’s way of providing a safe place for teenagers to voice their feelings and give their opinions on issues that affect their daily lives.

“There’s an absence of student voice in discussion,” Aspegren said. “Students really care about what happens to them because, well, they’re the people who are most affected when there’s a change in the community. We [students] deserve to have a voice. We have a lot of great ideas and a lot of the time our ideas aren’t heard because there are people who say that our voices don’t matter, that we’re just kids, but our voices do matter.”

The forum ended with a student and alumni panel made up of community members who have taken steps to encourage empathy and resilience. They answered questions about their own high school experiences Members of PAYC asked the panel  questions about issues that they had dealt with in high school that are usually considered taboo to talk about and are often stigmatized, such as depression and suicide.

“The point of this primarily was to encourage honest and open dialogue about issues that are very prevalent in high schoolers’ lives,” Yu said. “We wanted to tell people that it’s okay to do things differently, it’s okay to not be perfect at everything.”

As of now, there are no plans for a future forum. However, Yu encourages students to participate if another one should ever occur.

“I think it’s really valuable and these are issues that pertain to everyone,” Yu said. “I think everyone can offer something very valuable so, everyone should come out in the future.” The forum is a great way to reduce stress and bond with parents.