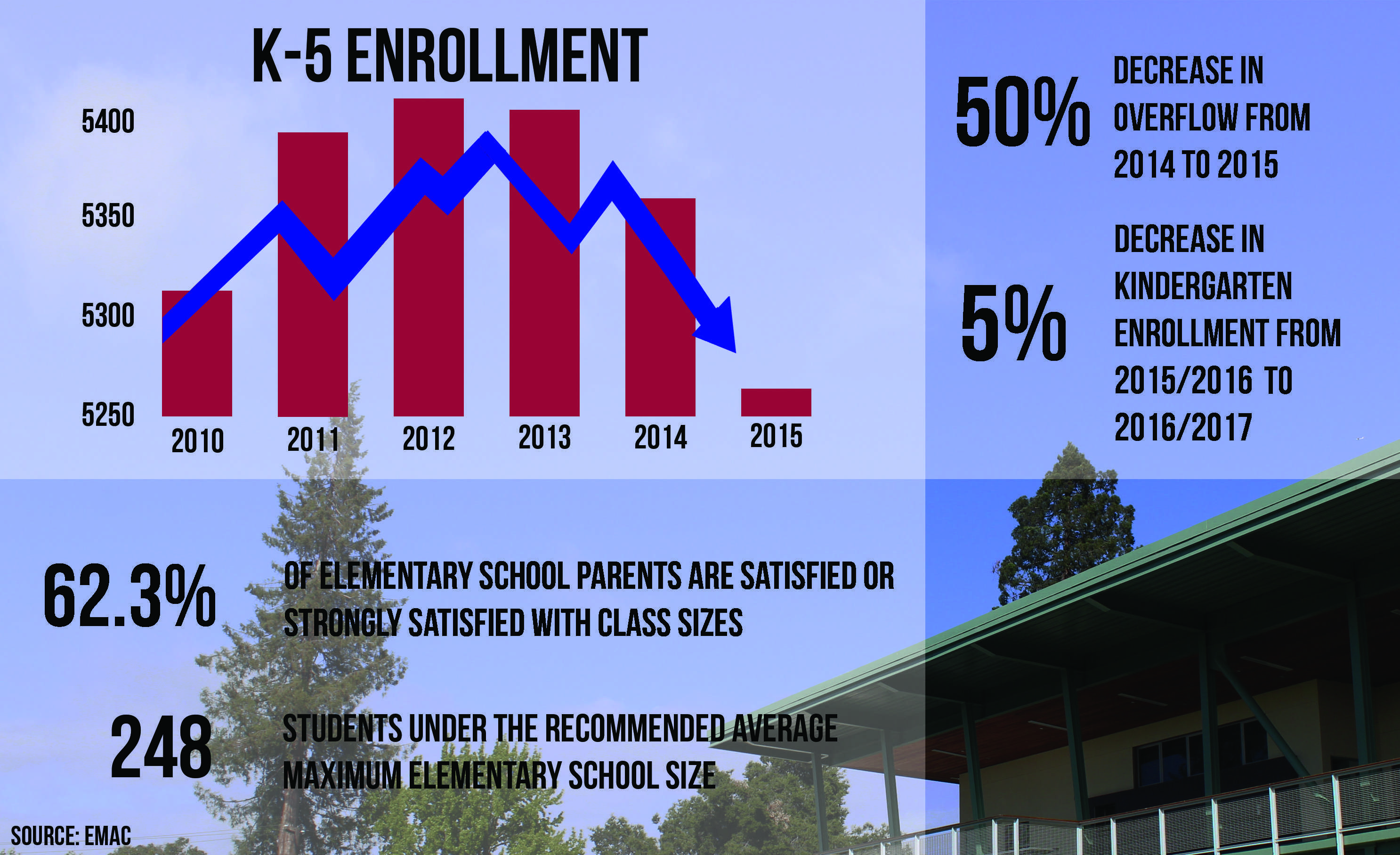 Board likely to reject school proposal

Jacky Moore and Ashley Zhang
News
April 28, 2016
Following its decision to veto the creation of a third high school, the Palo Alto Unified School District (PAUSD) Board of Education postponed voting on a proposal to open another elementary school in the District to May 10. Due to enrollment predictions for in incoming kindergarten classes, the Board is expected to vote in favor of dedicating the $60 million reserved for potential primary school construction funds toward improving extant schools during their upcoming meeting on May 10, ending the half-decade long discussion.

This reserve was birthed chiefly from the Board’s 2011 decision to cease funding for “elementary school projects that did not increase enrollment.” In the same year, the Elementary Subcommittee of the Enrollment Management Advisory Committee (EMAC) was organized to investigate the advantages and logistics of constructing a new elementary school. Against the conclusion of the remainder of the committee, three dissenting EMAC members presented a minority report in late 2015 which advocated for the establishment of an additional two elementary schools.

According to the report, the construction of these sites would render existing portable classrooms superfluous, pare down class sizes, and provide families seeking to register their children in a PAUSD school with more choices. The report further stated that the creation of the schools would alleviate enrollment concerns of potential overflow stemming from the creation of new housing in Stanford. The minority report explicitly stated that the District’s need for two additional elementary schools is not precipitated directly from enrollment projections; rather, it springs from the current elementary schools’ purported failure to provide students with the “education students deserve.”

Similarly, Board member Ken Dauber believes the most effective method of decreasing the District’s primary school class sizes entails constructing entirely new schools.  According to his website, one of Dauber’s three main goals regarding PAUSD’s academic facilities is to “immediately reopen a 13th elementary school to reduce overcrowding.”

“Our elementary schools are about 30 percent larger than they used to be 20 years ago,” Dauber said. “It’s true that we’re seeing some declines right now in the size of elementary schools, but they would have to decline a lot before they got down to the kind of size that we really want them to be.”

Prior to the release of the minority report, EMAC published a separate subcommittee report on the proposal that advised against the creation of more elementary schools. PAUSD kindergarten enrollment is expected to continue to decrease by three percent every year until 2019, regarding the large-scale operation of constructing additional primary schools inefficient.

Due to these conflicting advisements of the minority and majority report, EMAC was unable to reach a singular recommendation for the Board, and the new primary school proposal was tabled. However, Caswell noted that the general sentiment of the April 19 meeting was against and therefore expects the proposition to be rejected.

Earlier this year, the School Board voted against opening a third high school at Cubberley Community Center, which was designed to reduce and prevent further inflation of class sizes in Palo Alto’s two existing high schools. This resolution to improve existing schools instead of constructing additional facilities will likely carry over to the vote on the additional elementary school proposal during the next board meeting.