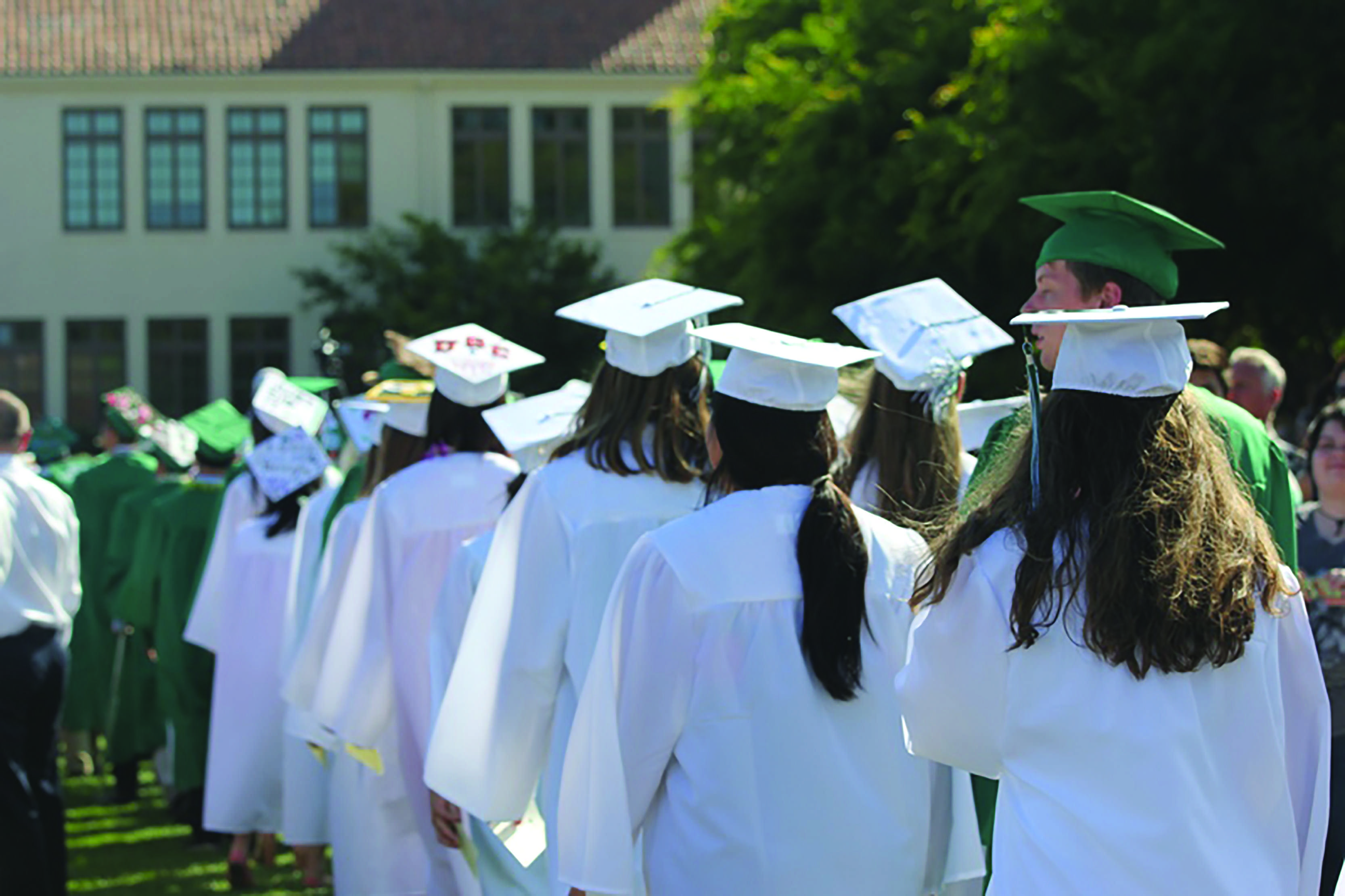 Alice Zhao
News
April 28, 2016
All graduating seniors this year will be required to wear green caps and gowns during their graduation ceremony due to several parents’ complaints last spring that the tradition of males wearing green and females wearing white excludes non-binary gendered students.

The administration was immedietly approached with the complaints and unanimously decided to implement the change without seeking student input last summer.

In the spring of last year, a new School Board Policy was released stating that Palo Alto High School could no longer separate students based on gender. Having been at Paly for nine years, Principal Kim Diorio argues that the color change was long overdue.

“Any time [Paly] segregates by gender, it puts [gender fluid] students in a pickle because gender is a spectrum and is no longer binary,” Diorio said. “The past practice of girls wearing white and boy wearing green was in some way sexist. [The change] is much more progressive, forward-thinking and supportive of all students.”

Some students feel that the sudden shift to all green was abrupt and unfair especially, as student opinion was not considered. Furthermore, there was no formal announcement of the reason for the change to the student body, causing confusion amongst the senior class. Senior Catherine Davidson had only heard about the shift to green when talking with a classmate and believes that it is unwarranted.

“I definitely think there should have been a student vote,” Davidson said. “If a guy identifies as a girl then he can wear white and vice versa, but to make the whole grade wear the same color is ridiculous. Graduation is a special day for students and admin made a dramatic change without any [outside] input. [Now], everyone is affected by [a few complaints].”

On the other hand, senior Karina Chan stands by the administration’s decision, emphasizing that students’ comfort with their gender identity should be the main priority.

“I do not understand how preserving tradition through the color of a gown could ever be more important than ensuring the feeling of safety and comfort that transgender and gender fluid people have the right to feel,” Chan said. “I feel like the senior class should be mature enough to understand why we made the change without someone having to spell out why we need to be accepting of gender fluidity.”

Even though senior Gabi Rossner suggests an alternative plan that would allow for both green and white caps and gowns to be at the graduation ceremony, she believes that the appeal of having two colors should not overshadow the change’s primary intention to be accepting.

“The alternate [solution] that I would support would be to assign green and white equally based on an alphabetical system,” Rossner said. “I think people bringing up thousands of alternate solutions detract from the administration’s attempt to be more inclusive of gender.”

While School Climate Teacher on Special Assignment Eric Bloom believes that future seniors should have more options in terms of cap and gown colors, he recognizes the potential sensitivity related to the topic.

“What you always have to be cautious of is this idea if white is still associated with [the female gender], anybody who chooses white could be perceived as more feminine,” Bloom said. “If 90 percent of girls choose white, then all of the sudden whether or not it is intended, you are now gender segregating again. Moving forward a discussion would be valid, [but] it cannot be a [vote by] majority rules as gender fluid kids are a minority.”

The tradition of males wearing green and females wearing white at graduation dates back to the 1920s, and has had no formal complaints up until last spring. Henry M. Gunn High School started requiring students to wear only black caps and gowns years ago, following a nationwide trend of high schools switching to uniformly-colored graduation garments.