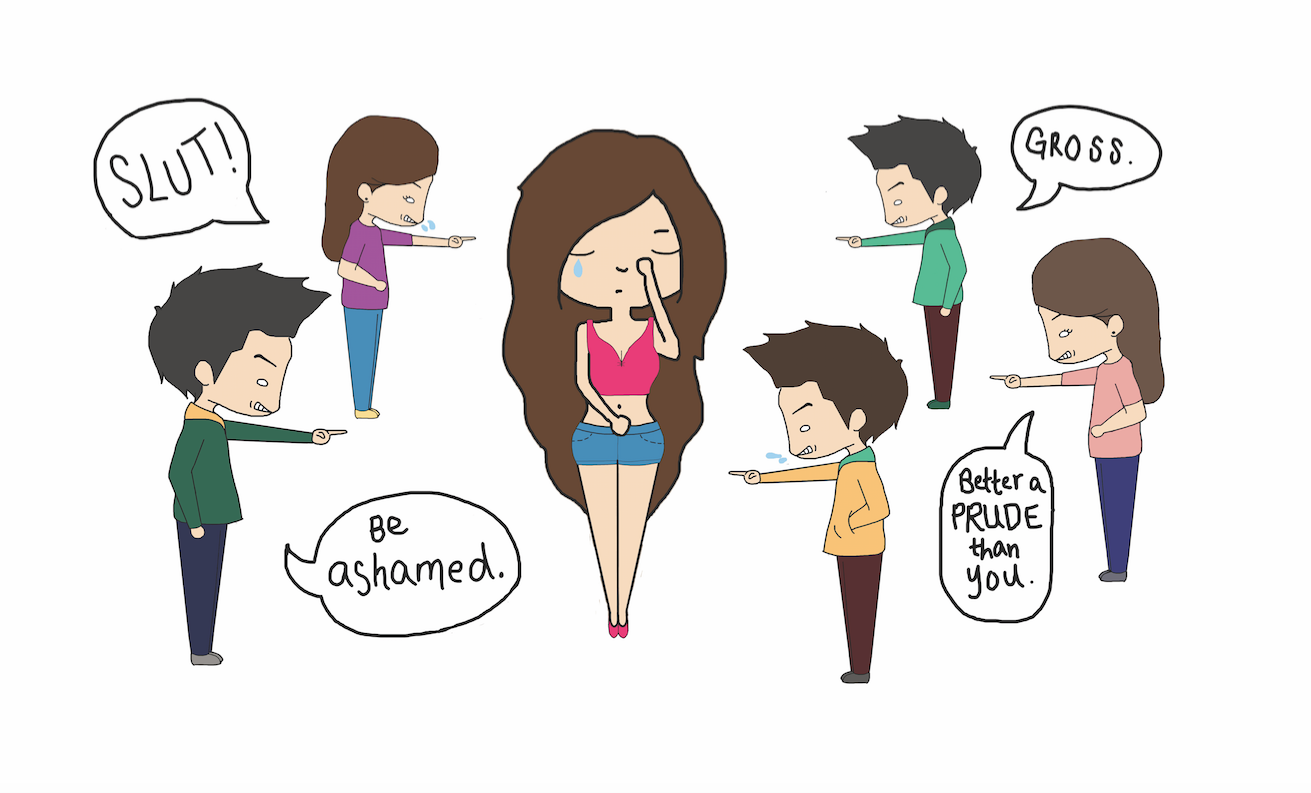 In recent years, feminism and the problems with how women are viewed in society have received much attention. Girls declare their feminism on social media, posting pictures of themselves sporting “The Future is Female” shirts as well as unshaven body hair, in an effort to make a political statement against female gender norms. However, what often goes unsaid is that the way teen girls are treated in private relationships still retains a hegemonic masculine focus despite the public feminist movement.

Two terms that arise often when labeling teen girls based on their sexual experiences are on two extremes: a “slut” or a “prude.” In the New York Times review of the book “Girls and Sex: Navigating the Complicated New Landscape” by Peggy Orenstein, there is a quote from a college girl that the Times claims “seems to sum up what it means to be a teenage girl right now.”  The girl, college-aged and majoring in Economics, is preparing to go out one with her friend and states that her goal “is to be just slutty enough, where you’re not a prude but you’re not a whore … finding that balance is every college girl’s dream.” After all, “what’s the point of a night if you aren’t getting attention from guys?” Although the book discusses this issue through the lens of a college student, it resonates with high school-aged girls as well.

Emily is a junior at Palo Alto High School whose name has been changed to remain anonymous, like all other students quoted in this article. She believes that a girl hooking up with multiple people is valid, and, if a girl were to do that, she should not be punished for it.

“I know a lot of people think, ‘oh, she’s a slut,’ but if a girl feels as though she wants to do that with herself, and as long as she’s respecting herself and those guys, then I don’t really think it affects anyone,” Emily said.

Emily has struggled with being slut-shamed and facing excess judgement surrounding a past incident.

“Well, I mean, it was a feeling of not really knowing who was judging you even though you sort of knew everyone was,” Emily said, regarding how she was affected by the incident. “And, I sort of stopped putting myself in social situations and took a break from that sort of scene.”

Of course, if Emily had been a teenage boy, she probably would have gotten a completely different reaction from her peers. This is the infamous double standard that exists within hookup culture. When guys hook up with more than one girl, they are often praised, whereas if girls are to engage in the same acts, they are often labeled as sluts.

The struggle to find a medium between slut and prude has been an ongoing battle for teenage girls. Being placed in the category of slut or prude can damage a teenage girl’s dignity by making her believe that her self-worth is determined by how many guys she hooks up with.

“In my opinion, being classified as a prude is nothing to be ashamed of at all,” Tyler said.  “Whereas in most cases, if a girl or a guy is categorized as a slut or whore, they have probably made decisions to be put into their category, so instead of having their self esteem affected, they should realize that they can probably do something about how they are viewed by others.”

Teenagers’ perceptions of the norms and expectations that apply to their gender are being distorted by the media. Many TV shows and movies display girls as modest and prudish, repeatedly telling the guy that they should wait before engaging in sexual acts. When a female character in a movie is labeled as the slut, she never finishes the movie as the victorious girl who still retains her promiscuity. On the contrary, she often comes to the realization at some point of her “sinful ways” and ends up completely altering her lifestyle, presumably, “for the better.” This sends a strong message to teenage girls as to how to facilitate their behavior.

Film and TV shows also rarely showcase the female sex drive or the sexuality of teenage girls; however, there are a few films that do so and do it well.

In 2015, the movie “Diary of a Teenage Girl” made its debut and was praised for its raw and truthful depiction of a teenage girl’s sexual awakening as she began an affair with her mother’s boyfriend. The film was applauded by critics for honoring the main character’s sexuality but not exploiting it.

Produced by Sofia Coppola, “The Virgin Suicides” pertains to the topics of repression. It showcases seemingly girlish innocence that is, contrary to audience expectations, turned into eroticism. This movie is set in the 1970s and follows five sisters living in a strict religious family. The girls become an item of obsession for boys in the neighborhood.

“Raise Boys and Girls the Same Way” is a statement that has been circulating on social media recently, displayed on shirts produced and made popular by companies like Brandy Melville. This is a fitting statement promoting the push towards reforming the rhetoric around adolescent sexual education. The predominant mentality of male control in private relationships does not seem to be going away anytime soon, despite the female-centric dialogue taking place publicly and largely on social media.

In “Girls and Sex,” Orenstein argues that, in order to fix this issue plaguing girls today, sex education in classes like Living Skills at Paly should include topics like consent and pleasure, not just contraceptives and preventing STDs.

In order to build an adolescent culture where both girls’ and guys’ needs are met in intimate settings, the talk around sexual education should be about the emotional and mental aspects in addition to the physical aspects. This improvement in discourse would also relieve the disparity around the double standards of hookups.