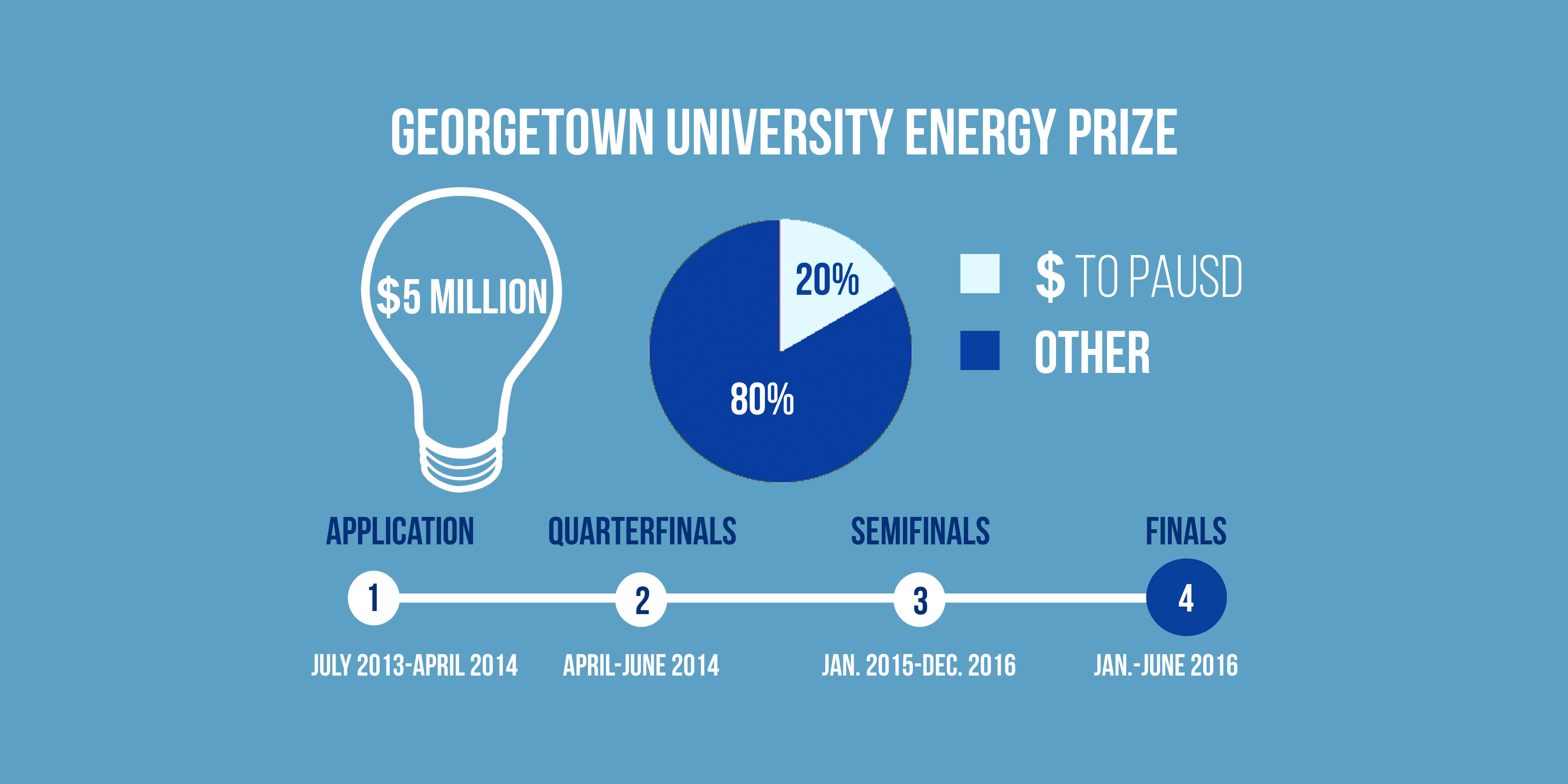 Palo Alto is currently in stage four, qualifying it in contention for the $5 million prize.

Sarah Wang
News
May 18, 2016
Palo Alto has been named a finalist in a nationwide energy-saving competition that would reward the city with a $5 million prize should the city win.

The Georgetown University Energy Prize (GUEP) is a multi-year competition that challenges cities across the nation to create sustainable energy efficiency programs. The competition, which began in July 2013, will announce the winner of the $5 million prize in June 2017 after all four stages of the contest are completed.

If Palo Alto wins, $1 million of the prize money would go to the Palo Alto Unified School District (PAUSD) to help with energy conservation on school campuses, as decided by the City Council.

In stage three, cities were tasked with implementing the changes. Palo Alto was able to enact all the changes, distinguishing itself as a finalist. In the fourth and final stage, which is currently in progress, the city will need to create a final report of all the programs implemented.

While an important goal of this competition is to win the prize, CPAU hopes that members of the community will become more involved and educated in energy conservation as well. Lisa Benatar, a staff specialist for CPAU who is leading the GUEP effort, sees community awareness as extremely beneficial.

“We think that one of the biggest opportunities presented by the Georgetown competition is fostering a closer working relationship between [CPAU] and [local] schools,” Benatar said. “[CPAU] can benefit because schools can help increase community engagement in our energy-saving programs. Students can benefit because they will be exposed to real-life information about how energy is measured, generated, and used.”

City leaders have begun efforts to encourage community members to reduce energy usage with its planning of a citywide competition. Starting in the summer of 2016, participants who reduce their gas or electric use compared to 2013 and 2014 will be eligible for a lottery ticket to win a prize.

“We think that one of the biggest opportunities presented by the Georgetown competition is fostering a closer working relationship between [CPAU] and [local] schools.”

PAUSD plans on using its $1 million allocation to implement new energy efficient equipment and solar electric systems. These implementations would not only save energy, but also educate students, according to Benatar.

“Including both energy efficiency measures as well as solar electric generation capacity would send a great message to students and the community that building efficiency should be maximized and solar generation offers visibility and educational opportunities relating to energy usage,” Benatar said.

Paly has also played its own role in the GUEP, as interns through Get Involved, a Palo Alto internship program for high school students, have worked alongside the CPAU staff. Senior Alexander Gouyet was one of the five interns from Paly working with the CPAU on the GUEP.

“As interns and as high schoolers, we provided a valuable connection between the City of Palo Alto and PAUSD,” Gouyet said. “We also worked on a miniature house which demonstrated various ways to save energy in a citizen’s household.”

Though Palo Alto is just one of the many finalists selected across the nation, the city stands out from the competition with its publicly owned utility (POU), contrary to most cities which get electricity and gas from privately held companies.

“POUs exist to serve the community, not to benefit shareholders [of privately held companies],” Benatar said. “So the City of Palo Alto Utilities is always working hard to get its customers lower energy prices.”

With this unique position and the implementation of energy-saving programs, the city hopes to win the prize in the summer of 2017 to further its goals of community engagement and education.