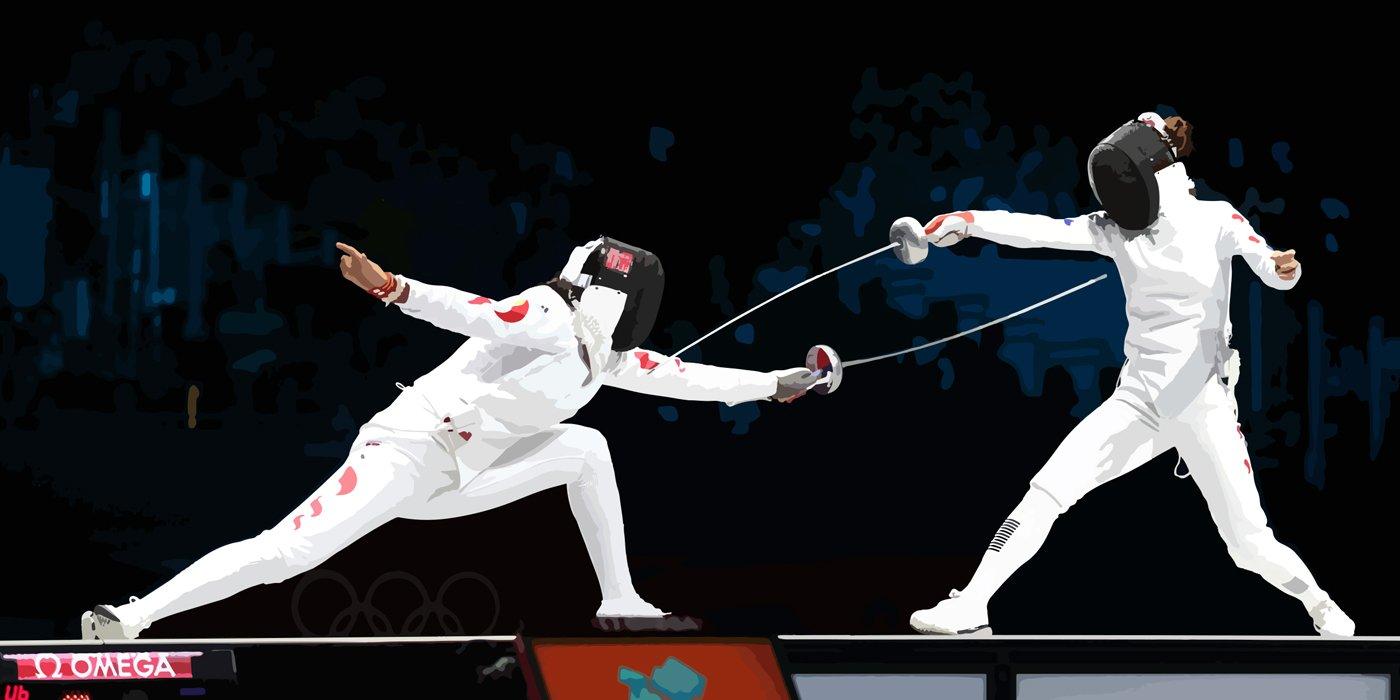 The referee calls out these three words, and the match begins. With one deft movement after another, the opponents battle against each other – both trying to strike offensively while protecting their bodies from their opponent’s counter-attacks. The high level of focus required to fence is why many have fallen in love with the sport. For Paly senior Julian Knodt and sophomores Nathan Jeon and Jerry Wu, fencing has evolved into a geniune passion.

The low amount of publicity recieved by fencing when compared to that of mainstream sports, such as soccer and football, is  especially evident in Palo Alto, where there is not a single fencing studio. Wu, who started fencing at the age of 10, was forced to commute to a community center class in Fremont to learn the sport. Jeon, however, had a much more unconventional path to becoming a fencer.

“I tried sports including basketball, swimming and badminton but nothing seemed appealing to me,” Jeon said. “But when I watched the 2008 Beijing Olympics, I came across fencing, which caught my interest. I asked my parents if I could try it out and I soon became committed to fencing.”

After a humble introduction to the art of sword-fighting, both Wu and Jeon soon became much more dedicated to the sport. Wu began fencing regularly at Le Club Touche in Mountain View; Jeon practiced rigorously  at the Silicon Valley Fencing Center in Los Altos.

Both of these fencing academies have earned prestige for producing some of today’s best youth fencers.

Knodt’s path to becoming a fencer started with encouragement from his parents, both of whom had fenced in their youth. After Knodt’s first time fencing, he immediately decided to pursue the sport more seriously.

Fencing has since taken up a much larger part of Jeon, Wu, and Knodt’s lives. It is no longer just a community center class to attend once a week or a sport to watch on television or a casual activity at summer camp. All three fencers train for two to three hours per day for six days per week. Practice sessions consist of sparring against training partners, agility workouts to improve their reflexes and endurance exercises to ensure that they can maintain a constant level of exertion throughout the entirety of a match.

On campus, Knodt, Jeon, and Wu do not seem like fencers. They experience the same rigor and stress most students feel during the year. Away from school, however, these three fencers participate in international competitions, where they vie to earn points against fencers from all around the world.

At tournaments, fencers are placed into pools of five to seven fencers. Each fencer must fight a bout, or match, against every other fencer in a round-robin style. Based on the results of the group stage matches, the top 80 percent of each group will admitted into a single-elimination bracket. The undefeated fencer in this final bracket is declared the winner of the tournament.

Of the three Paly fencers, Knodt has ranked the highest in these types of tournaments, impressively placing seventh in the world in the men’s cadet foil category in 2014-2015. Wu and Jeon are ranked 10th and 14th respectively in the nation for men’s cadet foil.

All three have competed on the international stage, traveling to countries such as Hungary, Croatia and Cuba to improve their rankings. Despite his already high ranking, Knodt is reamins driven by the same passion that motivated him to fence.

“It’s fun, and I enjoy it. That’s about it. I do it for my own satisfaction.”

For many high school fencers across the nation, competing at the collegiate level is not an option. There are only 42 colleges nationwide that offer fencing. Despite how difficult it is to be on a college fencing team, Wu still hopes to play in college. The intensity of the sport combined with the camaraderie of the team are Wu’s main motivators.

“I would like to fence in a Division 1 college,” Wu said. “Being in a team situation where everyone supports each other and cheers everyone else on is more fun than individual competitions in my opinion.”

Jeon, on the other hand, would like to continue competing individually and try to compete at the highest level possible.

“I’ve been training and preparing for the start of the new fencing season, and I have decided to take a shot at trying to make the fencing national team for my age group.”

Knodt will be graduating this year and starting a new chapter in his life. He will take a gap year before attending college. Though he will be on a college fencing team next year, this will not be the end of his fencing career.

“Hopefully, I will continue to compete at the international level, and improve how I fence,” Knodt said. “Some of my main flaws are my lack of stamina and muscle, so I need to work on improving those before I can hope to improve my fencing.”

When Knodt arrives to fence in college, the style of both the National Collegiate Athletic Association (NCAA) and the coaching he would receive from the school’s fencing program are very different than his current practice.

“As for collegiate fencing, the way the NCAA structures it is completely different from how it usually works,” Knodt said. “Coaches [in the NCAA] probably have a different philosophy than the club coach beforehand, which will be an adjustment I will have to make.”

The World Outside of Fencing

While fencing occupies two to three hours everyday, these accomplished athletes are thriving students at Paly.  Many of the skills that they have acquired through fencing can be applied to situations in their everyday lives. Wu believes that the opportunity to compete outside of the United States changed his social life.

“I’ve been able to meet people from everywhere in the world and create better friend groups,” Wu said.

For Knodt, fencing has helped to positively shape his personality.

“Fencing has probably been the most important factor into who I am as a person. [It’s] a very humbling sport, because there are a lot of other factors that go into winning besides just how strong of a fencer you are.”

Jeon has learned life lessons through fencing and noticed a comparable shift in his attitude towards school after he began to fence seriously.

“I’ve learned that a loss isn’t everything, and that learning from your past experiences is what’s important,” Jeon said. “Fencing has taught me perceptions in life about teamwork, patience and friendship and is something that can be used in the normal world like in school, at home, or with friends.”