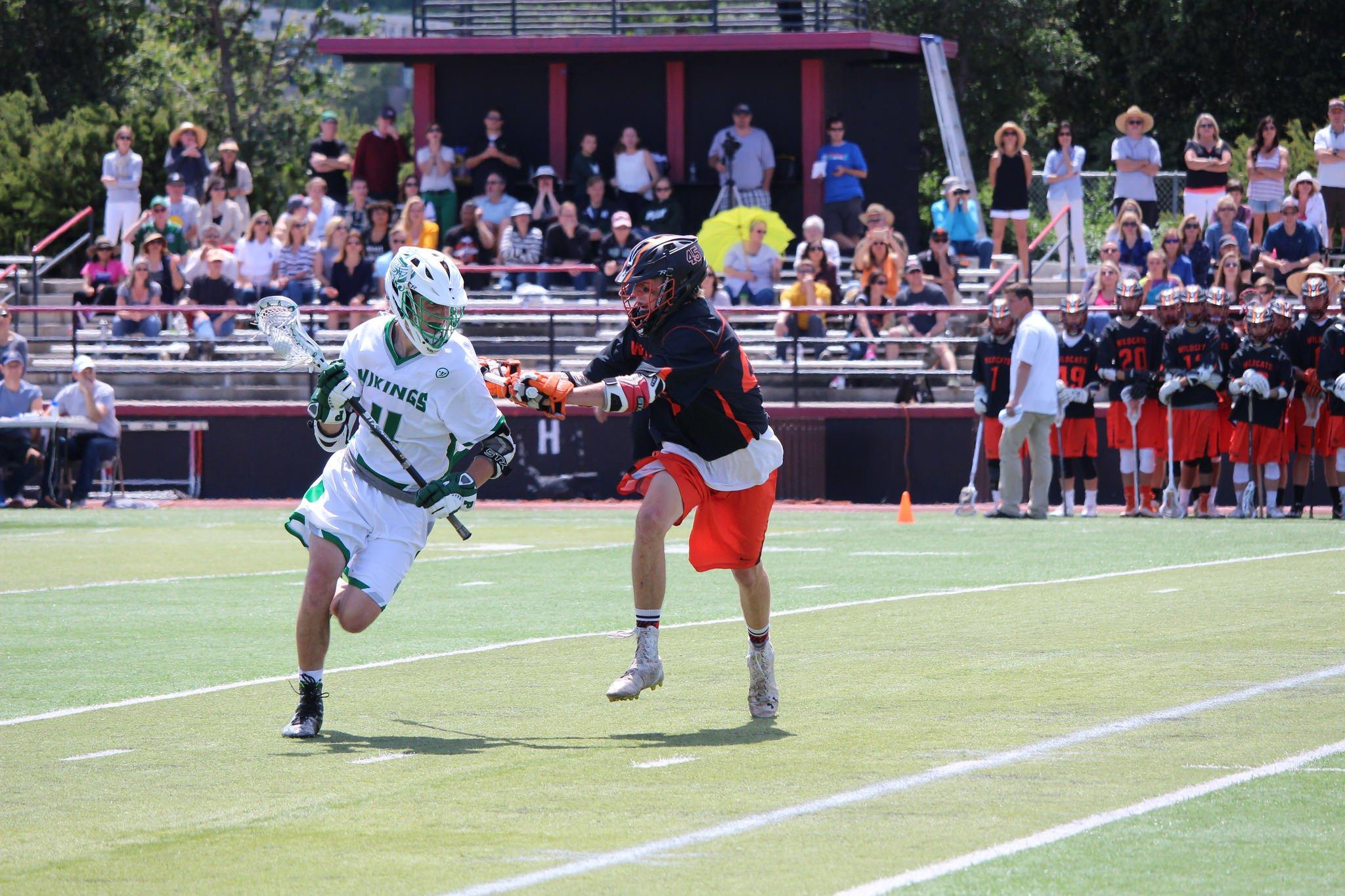 Junior Hayden Libbey cradles the ball in the championship game against Los Gatos.

Madeline McCluskey
Sports
May 19, 2016
All good things must come to an end. As the Palo Alto High School boys lacrosse season comes to a close, they head into the Santa Clara Valley Athletic League (SCVAL) playoffs. The team was ranked first in the De Anza League with an almost perfect record, having lost only one league game to Los Gatos High School.

In the first playoff of the SCVAL championship, the boys won against Saratoga High School with a score of 16-3. This win placed them in the final championship game against second seed Los Gatos High School. The boys fell 5-7 to Los Gatos, ending their season as second in the league.

I think that we’ve definitely learned from the games that we’ve lost.They’ve all been really close losses except for one and they’re just learning experiences.

However, the Vikings have also have been aiming to strengthen their team along the way.

“In terms of team goals, we really wanted to win SCVAL and win our division because we were the division champions last year,” junior Alec Cohen-Schisler said. “Thus far we’re on track to do that. We’ve obviously made playoffs so we just need to win our next two games and then we’ll be a repeat champion.”

The first team Paly faced was Saratoga High School. Having already played them twice this season, the boys had gained a thorough understanding of their opponents.

“We’re relatively ready [for championships] at this point,” Cohen-Schisler said. “We’re replaying Saratoga who we previously beat relatively handily. We’re not too worried about that game, but again we worked very hard today, we’re gearing up for playoffs and we really want to bring the intensity and the focus.”

To challenge the boys, head coach DJ Shelton had scheduled many challenging, non-league games for the team on off-days and weekends to prepare them for the SCVAL championships.

As the team has have played extraordinarily well this season, these games allow the team to play a variety of competition. The boys have lost a few non-league games, which do not show up on the team’s record and do not affect their placement in SCVAL playoffs or their ranking within the Santa Clara League.

“I think that we’ve definitely learned from the games that we’ve lost,” junior Yusuf Rizk said. “They’ve all been really close losses except for one and they’re just learning experiences. Maybe if we didn’t lose those games we wouldn’t have won a bigger game against a bigger opponent.”

The team’s main goal throughout the season has been to win SCVALs.

The boys hoped to end their season successfully by winning the SCVAL championship and cementing their spot as division champions.

“We were very good at the beginning of the season — we won our first couple of games,” Cohen-Schisler said. “And then we plateaued a bit but our coach DJ really motivated us to keep improving. We’ve definitely improved in terms of stick skills and team chemistry and overall I think we’ve become a much better team over the course of the season.”

A recurring challenge for the boys has been equality on the field. The team is very strong both offensively and defensively, limiting the midfielder’s ability to contribute to the game.

“Our biggest issue at the beginning of the season was having not a lot of midfield depth,” Shelton said. “We’ve had a great attack unit since the very beginning and our defense has been pretty good. Our midfield has been really shallow and I’d say that we’ve definitely developed a lot more depth in the midfield. So the consistency factor has really helped us: it’s helped our offense.”

As the season comes to a close, the team remains optimistic about next year.

A significant change the team will see is the loss of many talented seniors, who have played a large role on the team this year.

While it should not be detrimental to the team next year, it persists as an area of concern.

“The hardest part is just replacing the seniors –– especially this group,” Shelton said. “This is a group of Seniors that a core element of them have been on varsity since their freshman year. These guys have been the rock of this team for a long time and replacing their skill and expertise is something that is definitely going to be hard to do.”

We were very good at the beginning of the season — we won our first couple of games. And then we plateaued a bit but our coach DJ really motivated us to keep improving.

While many are proud of the boys’ accomplishments this year, they still note that there are areas for improvement for next year’s coming season

Currently there are no CCS playoffs for the boys lacrosse team. However, Athletic Director, Kathi Bowers is working on making that a possibility for the upcoming year.