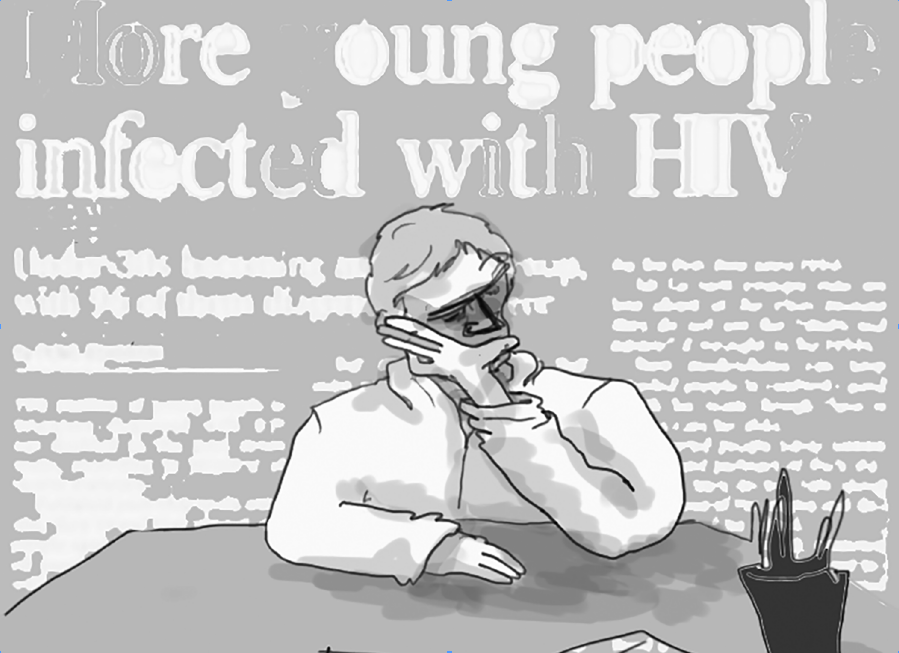 Bethany Shiang
Lifestyle
September 14, 2016
He isn’t fully out to his parents, or to his friends. He had unprotected sex. His lover told him yesterday that he tested positive for HIV, syphilis and gonorrhea. He may have HIV too.

It’s no one’s fault, but it happened. Stress has left him confused and ashamed. Fear has manifested itself in physical form — a stomachache, sweaty palms, elevated heart rate and the inability to sleep. He can’t tell his family.

He can’t tell his friends. The only solace he has is the knowledge that there is free medical support for people in similar situations to at a non-profit foundation in the Castro District of San Francisco. The only thing he can do now is make an appointment.

“The new center, Strut, will use a holistic approach to focus not on sickness and disease, but on health and wellness,” said Tim Patriarca, executive director of Strut, in an interview with online blog, Beta. “We want to inspire and empower the gay, bisexual and transgender men in our community to take control of their health and give them the tools, support and knowledge to be able to do so.”

The 1980s were the height of the AIDS/HIV epidemic. Because it was unknown how AIDS spread, people became paranoid of who and what they touched. There were no tests and no real treatments. Consequently, AIDS struck many young men, especially those in the gay community, so much so that its original name was “gay-related immune deficiency.”

Doctors and nurses were scared to touch patients and debated if they had a moral obligation to treat patients. Parents didn’t take their children to hospitals that treated patients with AIDS and religious communities called patients with HIV “abominations.” The most numerously reported cases were in San Francisco, Los Angeles and New York.

“If you were living in the Castro [District] in San Francisco mostly everyone in the neighborhood was gay,” said an anonymous patient of Strut. “So you wouldn’t just see your friends that were dying, it was your whole neighborhood. One of my mailmen died and the next day a flower shop was gone… You wouldn’t be invited to the funeral, so it was just like people were disappearing.”

Although San Francisco was documented as one of three cities in the country with the highest numbers of HIV cases, it now looks to be the first city to end HIV transmission. Nearly 16,000 people living in San Francisco have HIV, 73 percent of which are men who have had or are currently having sex with men.

The Castro area of San Francisco has the highest rate of HIV diagnoses out of any other neighborhood in San Francisco –– three times more than the average rate of the entire city. Having a clinic in the Castro District that targets a certain demographic helps make a strong, positive impact on the gay community.

“Strut is about coming together to build a stronger, healthier and more vibrant community,” said Neil Giuliano, San Francisco AIDS Foundation CEO, in an article with San Francisco Bay Times.

“Sometimes guys come into the clinic looking for sexual health services, but when you scratch below the surface, you learn that they may have ongoing substance use concerns or may just be lonely,” said Steve Gibson, director of sexual health services, said in an interview with Beta. “With the move to Strut, we’ll be able to get them into a counseling session to talk about their drug use.”

Ultimately, HIV can be introduced into any male’s life while he is doing a very basic, human thing: needing love.

It is unfair that this disease punishes people who only want to fulfill a basic human need, but life presents many unexpected consequences.

He does not need to be ashamed of how be became HIV-positive, but how he lives with it.

Strut is helping LGBTQ men learn to be proud of how they handle such a disease and to know that everyone should and will be proud of them for what they endure.