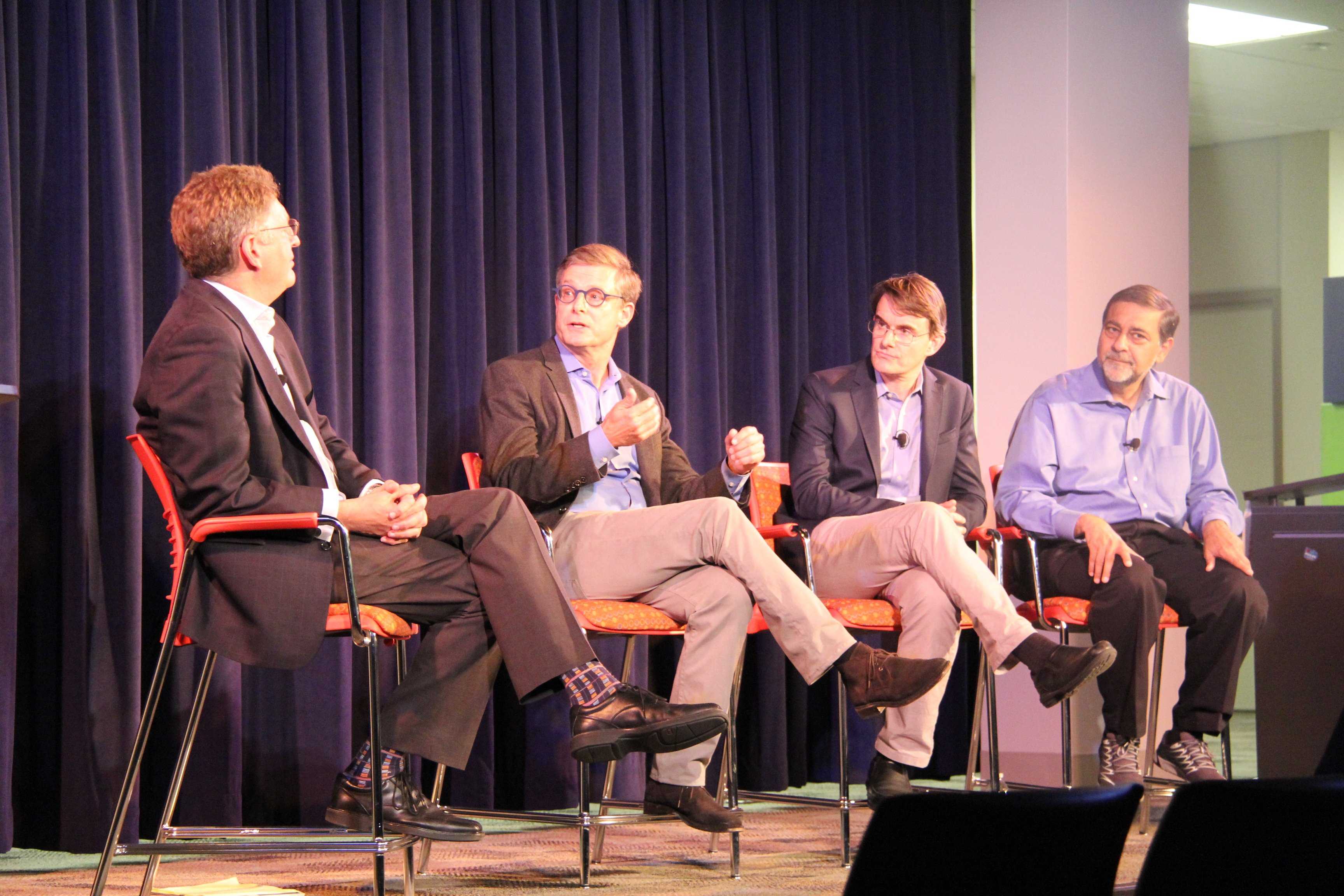 The panel tackled issues of the new digital era of journalism by discussing questions, asked by youth and adult alike, ranging from issues of censorship to source validity. As news has largely shifted from print to online, global opinions have become increasingly accessible to the public.

“When you have platforms that are global, they are reaching outside and you’re now thinking outside your own country,” Brigham said. “When you’re able to communicate with people worldwide, you’re going to start hearing new ideas.”

The panelists agreed that what makes this digital era of news unique is the equalization of power through social media. Regardless of social status, social media only provides limited mechanisms of expressing opinions — posts, comments and likes — which all users can leverage.

“Yes, someone can have more followers or subscribers on social media,” Wadhwa said. “But the fact is that the method that they use for influence, for weighing on news events, it’s equal — you don’t differentiate between individuals who are more popular or less popular.”

Wadhwa said this differs from traditional forms of media reporting in which news sources held the power of information; what is published for the public to read and understand was previously filtered and tailored to a particular outlet’s preferences.

With equal voices on social media, the idea of counter-speech, or weeding out negative and hateful ideologies, becomes much more plausible. Counter-speech can be used through social media platforms to directly challenge hate speech and promotion of violence.

“[Without social media,] bad ideas that should be corrected through counter-speech will find themselves in the chambers of the dark parts of the Internet that will never be challenged,” Stern said. “So I think it’s important that we allow platforms where the ideas are challenged and that we allow the power of communities to actually take those ideas and actually show that it is unreasonable.”

However, in addition to a strong reliance on the community to check hateful and improper content, companies like Facebook and YouTube also actively filter information and media based on their set community guidelines. While posts pertaining to sensitive information and topics are normally removed, exceptions are made depending on the context that the image, article or video is presented in.

“I think that we agree that you have to compare the issue at hand with what is in your guidelines,” Brigham said. “Then, you have to worry about the context of this content. Context is everything. Is it graphic and gory just for the sake of being graphic and gory? Or is it in the context of a news report? It’s a tough decision to make but at the end of the day, it’s the community that educates you, and gives you feedback, which makes you better.”

Wadhwa also mentioned that given social media’s capacity to potentially allow almost anybody to post content, online journalism is too abundant to keep track of. He finds that it is now common to find works of journalism that are blatantly false and unwarranted, and it becomes a challenge for platforms to distinguish between credible and incredible sources.

However, the panelists pointed out that the online community is extremely powerful in fact-checking itself.

“I believe in the power of communities,” Brigham said. “We’ve seen for example, in Wikipedia, communities of editors, photographers, writers who come together and who task themselves with editorial duties and to be able to put together a non-profit site and offer it to the world. I also see that in the communities at YouTube, where creators are creating videos about hate speech, about harassment to present the contrary view, the view of belonging.”

Even then, it is difficult to filter journalism with complete effectiveness given our current technologies, Wadhwa said. He challenged the youth in the audience to begin reflecting on ways to manage the overflow of online content, but was also optimistic in the developing technologies that have the potential to be utilized to eliminate biases in the filtering of content.

“I see this as a losing battle for now until more technology comes into place,” Wadhwa said. “For example, earlier I talked about virtual reality. Imagine now if we could visit war-zones and talk one-on-one with people in real time. No platform provider would be able to censor that out. And artificial intelligence would be able to filter content in ways that humans can’t.”

Ultimately, the panelists emphasized the importance of believing in the power of social media — in it’s ability to broaden our perspectives, and in our ability to utilize social media for good.

“This is why I think it’s important that we don’t forget the positive message of social media,” Brigham said. “People are constantly challenging our ideas and causing us to rethink our ideas, beyond our culture, beyond our own economic situation.”