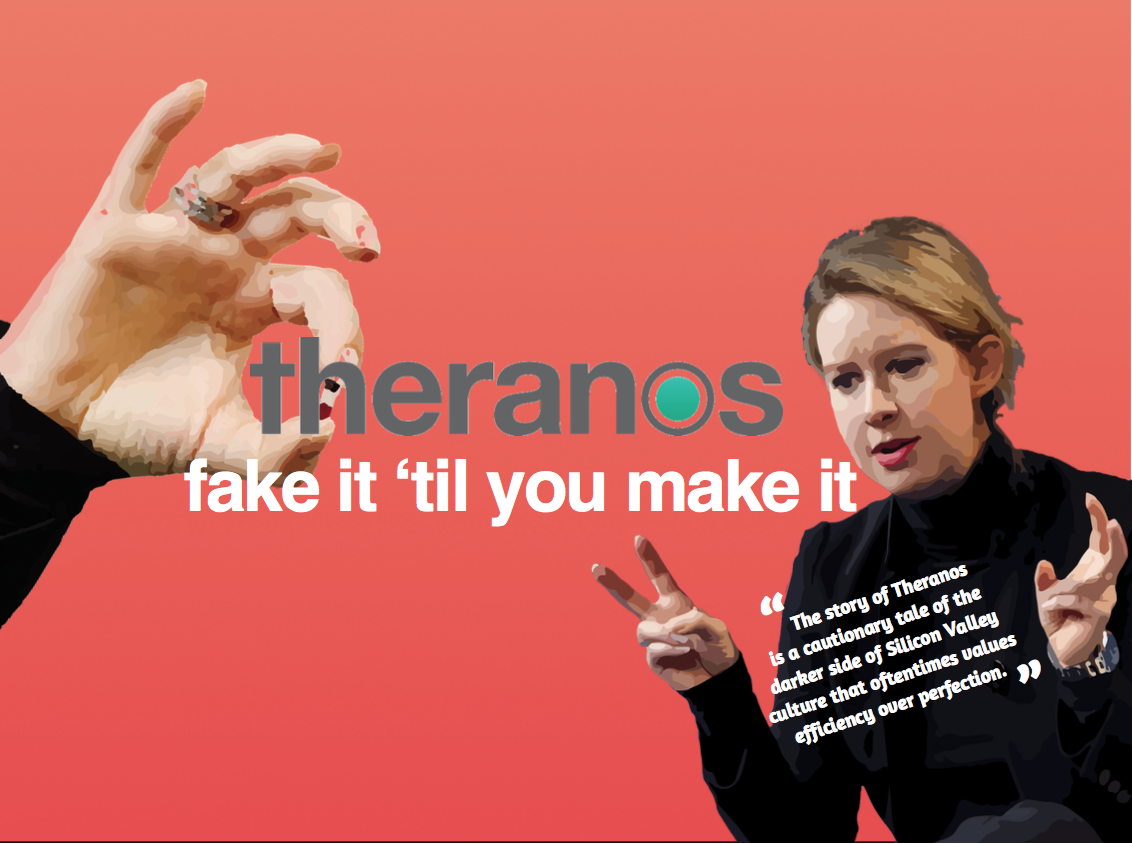 Theranos: fake it ’til you make it

Ehecatl Rivera-Pinedo
Lifestyle
October 6, 2016
For over 13 years, the medical world was on a path to abolish traditional blood testing. Thick needles inserted painfully into sensitive veins were on the chopping block, and there were whispers of a new mechanism on the market: a  modern, efficient device that needed only a drop of blood to function. No more eating sandwiches and drinking orange juice after a blood draw — testing would be faster than brushing one’s teeth. Recently, however, this dream has come crashing down, hurting  investors, supporters, workers and consumers in its wake.

The Silicon Valley blood testing company Theranos claimed that it could diagnose over 200 illnesses with a few drops of blood using its revolutionary “Edison,” a moniker for its proprietary diagnostic platform. Currently, Theranos is under criminal investigation by the Food and Drug Administration (FDA), the Securities and Exchange Comission (SEC) and  the U.S. Department of Justice (USDoJ) since April of 2016 for allegedly falsifying data and  information used by many patients to make significant medical decisions.

The story of Theranos is a cautionary tale of the darker side of Silicon Valley culture that oftentimes values efficiency over perfection. Amid the intense competition of being on “the cutting edge,” speed is an essential factor and producing a product quickly ultimately becomes more important than assuring that it is ready for the public.

A large poster inside the Facebook headquarters reads: “Done is better than perfect.” In the recent months, this quote came to parallel the Theranos business model. From its leap to fame, through its meteoric rise, to many months of criticism and finally its demise, Theranos shows what happens when everyone buys into a product that seems too good to be true.

Theranos claimed that it could inexpensively use its revolutionary device to test blood obtained via a finger stick, a device that pricks the tip of the finger (to draw a few drops of blood), as opposed to testing several vials of blood by obtaining it directly from the veins. This would have dramatically altered the blood testing field for the better by making cheap, fast and largely painless tests available ubiquitously.

“The story of Theranos is a cautionary tale of the darker side of Silicon Valley culture that oftentimes values efficiency over perfection.”

The company was led by bright CEO Elizabeth Holmes, who dropped out of Stanford University to pursue her entrepreneurial dreams. Investors poured money fervently into her fledgling company: by 2014, Theranos was worth an estimated $9 billion. Holmes was named the youngest self-made billionaire and dominated the covers of several magazines, from Forbes to Fortune. Theranos also signed major deals with Walgreens and Walmart to set up spa-like stations in retail drug stores for taking blood samples. Strangely enough, this was all achieved despite a lack of medical and scientific expertise from the Theranos board, which included former CEOs of companies like Wells Fargo and Bechtel Group Construction.

By 2015, the company had gained significant publicity, but rumors began to reveal that some of the company’s claims were fraudulent, which would diminish the influx of investor dollars. The information provided by Theranos machines were used to make critical medical decisions for patients, and fraudulent claims on the accuracy of the machines could potentially be harming the patients. However, after the meteoric rise of the company, these accusations seemed impossible.

The article stated that the company was only using its Edison device for 15 of its blood tests and that the other 190 or so were being performed using traditional, third-party machines. Furthermore, one of the former Theranos employees reported that there were flaws within the Edison’s design.

Theranos responded to the article by releasing a statement on their website the same day that the exposé was published:

The company’s statement was not a point-by-point denial. Rather, Theranos focused on calling out the “disreputable” employees who had been interviewed in the expose.

The Journal also noted that after the release of their article, Theranos deleted a sentence from its website: “Many of our tests require only a few drops of blood.”

Despite its many contradictory statements in the past year, even under scrutiny, Theranos has maintained that they continue to serve thousands of satisfied blood test patients.

With allegations mounting, the spotlight fell on  Ian Gibbons, Theranos’s chief scientist. While working at Theranos, Gibbons came across a few issues, the main one being the inaccuracy of the company’s results; he  began to see that the company’s prized product was more a fantasy than reality.

Gibbons was asked to testify for Theranos in a patent case involving the Edison, but was reluctant to do so. If he didn’t reveal that the Edison wasn’t completely accurate, he would be putting thousands at risk.

“Done is better than perfect.” In the recent months, this quote would come to parallel Thermos’s business model.

Holmes was upset at Gibbons’ reluctance and had one of her assistants call his home on May 16, 2013 and was notified that Holmes wanted to meet with him. Fearing that he would be fired from Theranos, Gibbons attempted suicide. He was rushed to the hospital and died a week later.

His wife, Rochelle Gibbons, called Theranos to notify them of what happened. According to Mrs. Gibbons, the assistant who answered the phone was sympathetic and offered her condolences. However, Gibbons later received a message from officials at Theranos requesting the return of any and all Theranos equipment, as opposed to receiving a condolence call or message from Holmes.

At the peak of Theranos’s “success,” Forbes placed Holme’s net worth at an estimated $4.5 billion. Forbes had based the estimate on her 50 percent stake in the company; since then, Forbes has reevaluated Holmes and decreased her net worth to zero.

Federal regulators may ban Holmes from running or owning any laboratory for two years. Also, their primary laboratory in Newark, Calif., may be revoked of certification if the ban is effective. If the California ban is passed, Theranos will be forced to close their lab in Arizona as well.

Following the closure of blood testing services in the Palo Alto laboratory, Walgreens released a statement during the summer of 2016 stating that it had terminated its relationship with Theranos and would additionally be closing all of its 40 Theranos blood testing centers in Arizona.

When Theranos was initially founded, one could say that Elizabeth Holmes’ story was quite inspiring. She was a college dropout, a woman trying to claw her way up in the STEM field amongst many men. She had an idea that had the potential to change the world for the better. She possesed many of the qualities valued in the Silicon Valley.

But Theranos became an example of what can go wrong with an ethos that values creative disruption and makes heroes out of people who promise to change the world for the better. While many companies rely on getting their products out rapidly as opposed to perfecting them, when developing medical products there could be grave repercussions if any kind of flaw exists. At the end of the day, Theranos’s wild ride boils down to a classic case of “The Emperor’s New Clothes,” on a more dangerous scale. The demise of this highly hopeful company that seemed to have everything going for it makes one wonder: