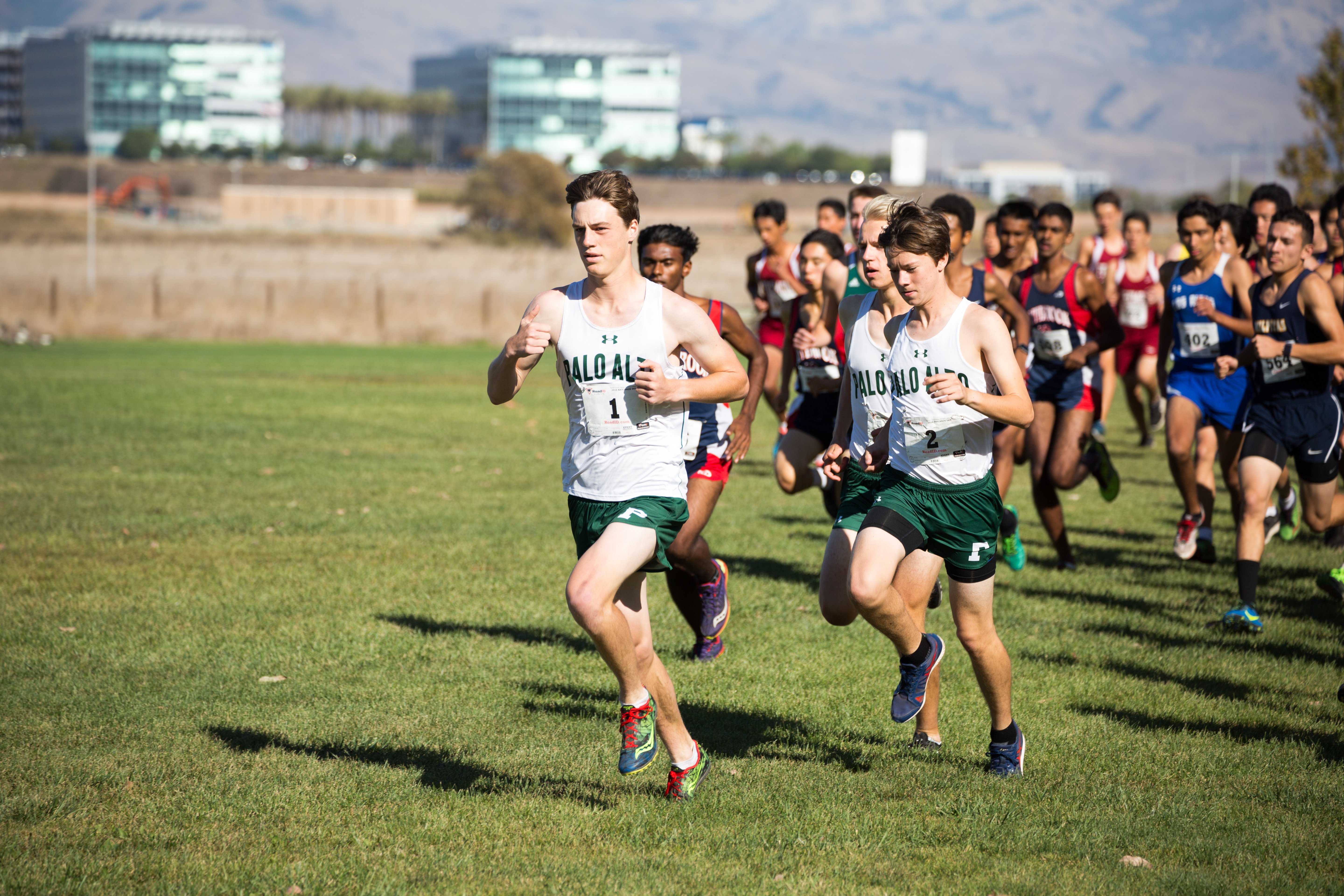 Senior Kent Slaney leads Paly during the third SCVAL meet of the year at Baylands.

“Overall, we did really well and had good performances from younger runners and those coming off injury,” junior Reed Foster said.

The runners will continue to improve their performances as they train each day.  According to senior Ben Beaudry, this will be accomplished with a variety of practice techniques implemented by coaches Mike Granville and Michael Davidson.

“We are doing a variety of different workouts, such as sprint training, long distance, and runs where we keep a specific and steady pace,” Beaudry said.

As the season comes to a close, the team will qualify for the Central Coast Section (CCS) championships. Ideally, both the girls and boys teams would like to qualify as many competitors, if not more, for CCS than last year. However, the grueling season has taken a toll on the team and they have started to refocus their goals.

“When we started the season we want to beat Bellarmine, but with injuries that could be a stretch,” Foster said.

While the team has supposedly approached this season by focusing on meet by meet performance, the CCS championships have been in their heads the entire season.

“We have been judging what we do in invitational meets and we can see where we stack up against people in CCS and states,” Beaudry said. “We’ve been using this tactic all season long to create expectations for CCS.”

The Vikings will travel to Crystal Springs next week for a fourth SCVAL meet. Some of the fiercest running crews in the league such as Crystal Springs Uplands School and Los Altos High School will face off against each other. While this meet will without a doubt be a challenge due to the hilly terrain, Yuen believes that there is not an obstacle this talented team cannot tackle.

“We’ve got several runners who do really well on hills and we plan on training on hills at Crystal or other places,” Foster said.

As for next season, the team will lose a number of seniors, which could have a drastic impact on overall performance. To try and counter the devastating loss of many dedicated seniors who headed the team’s success this year, many sophomores have been called up to either run in the Varsity II meets, a lower level of varsity, or practice with the  varsity team. One of these talented underclassmen is sophomore Henry Saul, who has performed with promise throughout the season and earned a spot as one of the team’s top runners.

“He’s one of two people who ran a sub-16 5k as a sophomore,” Beaudry said. “If he keeps on going, he’s going to be our fastest runner for the next couple years.”