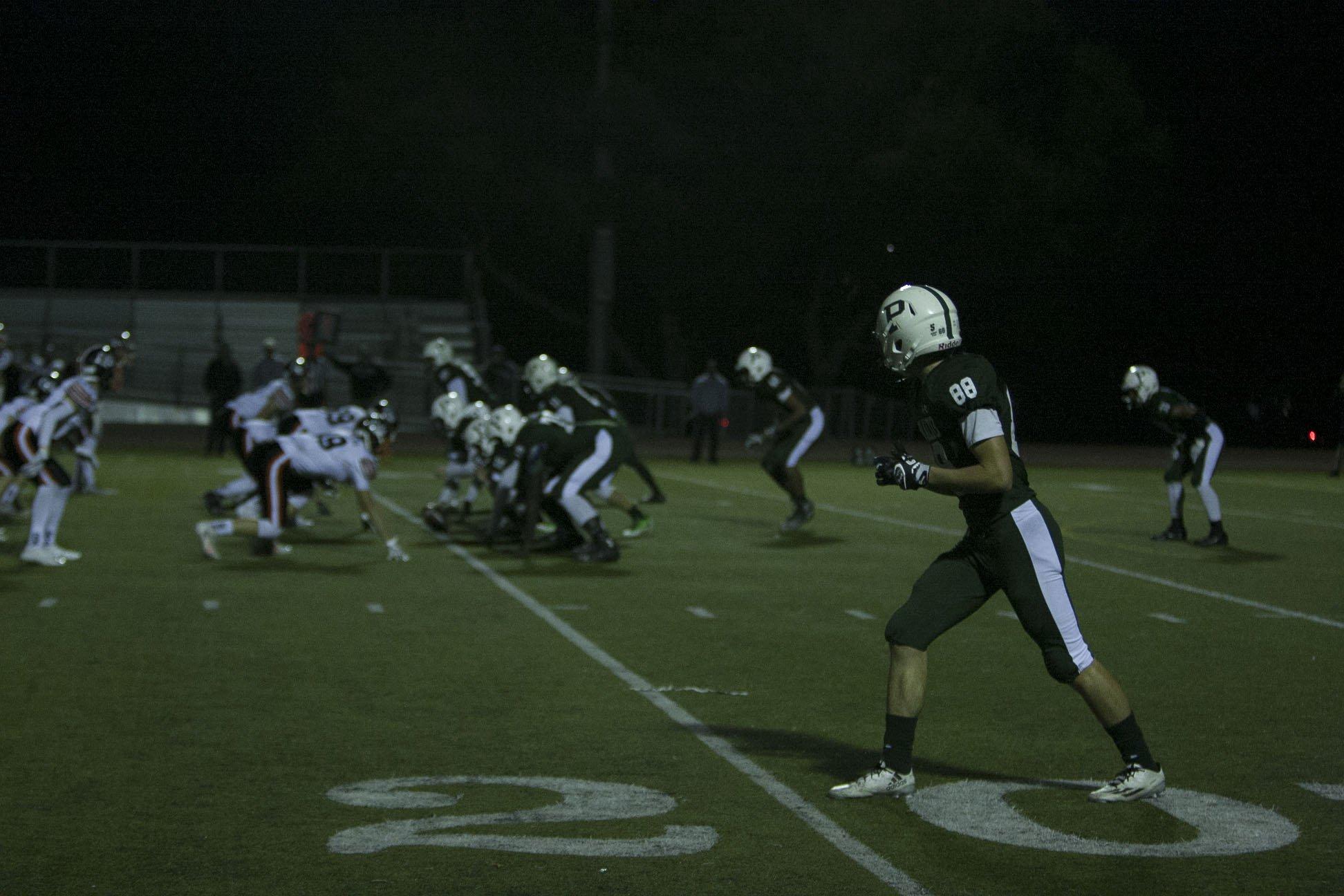 Wide receiver Nick Smallwood (#88) lines up against the Los Gatos High School Wildcats. The Vikings ended the night with a loss.

Niklas Risano
Sports
October 26, 2016
One week a crushing defeat, and the next a triumphant victory. This has been the prevailing trend for Palo Alto High School’s football squad throughout the course of their rather mediocre season.

On Oct. 7, the Vikes traveled to Milpitas High School to play the one loss Trojans. Milpitas managed to score 42 points, with at least one touchdown in every quarter. Paly, on the other hand was stuck with goose eggs in every period. The Vikings’ performance was dismal in virtually every respect.

Jackson Chryst, sophomore and starting quarterback, struggled to find his receivers, completing only three passes on the night. The defensive issues were clear from the scoreline. Possibly the only bright spot was the emergence of sophomore lineman Wes Walters, who led the team with six tackles. The Trojans are one of the best teams in the league, but nonetheless, this was an ugly loss.

The following week, on Oct. 14, the Vikes faced the Wilcox High School Chargers, who were undefeated in league play. Chryst played his best game of the year, completing six of 11 passes for 120 yards, and even adding a rushing touchdown.

“Jackson Chryst is becoming a presence, and teams are beginning to be forced to adjust to him before games,” said junior and running back Paul Jackson III.

Once again, Jackson III had a impressive performance racking up 98 yards and three touchdowns on only 20 carries. On the defensive side, seniors Josh Brigel and Peter Snodgrass led the team with 10 total tackles each. Overall, this was a quality win for the squad.

Sadly, the team was not able to carry their momentum from the Wilcox game into the homecoming  matchup against head coach Danny Sullivan’s alma mater, the Los Gatos Wildcats. The Wildcats were undefeated in league play going into the game, and remained so afterwards. The Wildcats had their way with the Vikings defense, rushing for a total of 253 yards, and passing for an additional 187. On the flip side, the Vikings offense remained quite the whole game, until a late fourth quarter touchdown followed by a missed 2-point conversion. The game ended with Los Gatos scoring an impressive 35 points to Paly’s measly six.

The team’s only remaining game is an away matchup against the 6-3  Mountain View Spartans. Hopefully the Vikes can end this tumultuous season of rebuilding on a good note.

“I have confidence in my team,” Jackson III said. “We will win this next game against Mountain View.”