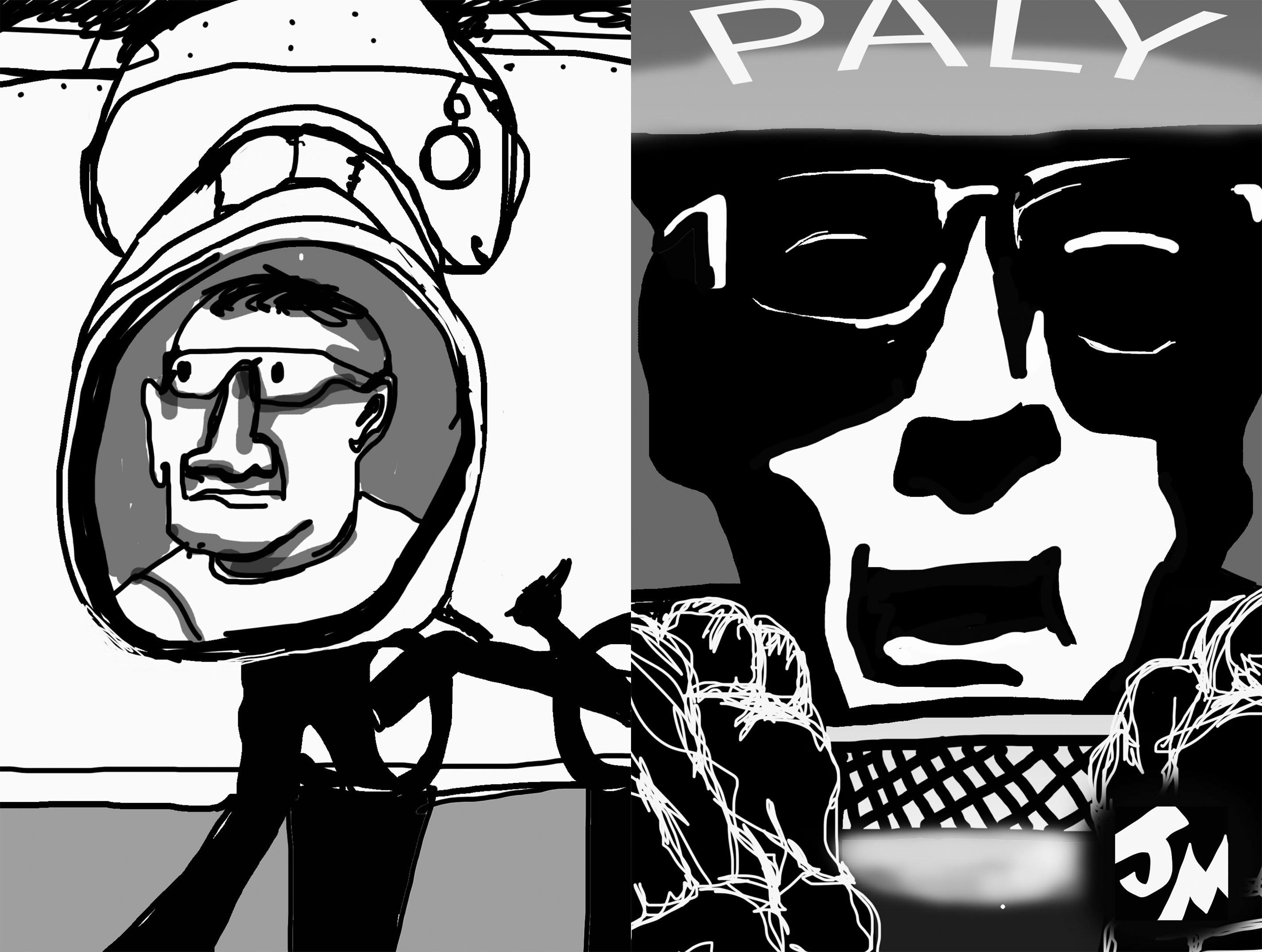 Jacques Manjarrez and Joseph Yang
Opinion
October 26, 2016
The Breakdown
Administration quietly installed high-definition color cameras around the school this year. Are these devices here to protect students from criminal activities or are these an infringement on students’ civil liberties?
Cameras safeguard students

Earlier last month, my bike was stolen from the bike racks outside the science department. Although one might argue that I was indeed asking for it by not utilizing the simple yet effective deterrent known as a “lock,” I was distraught. Wings now pried from my back, I stumbled into the main office with the seemingly futile hope that perhaps they might know of my bike’s location. Upon entering, I explained my situation to the administrative assistant, who responded with a phrase which was what I initially presumed to be cruel mockery:

As it turns out, Palo Alto High School recently installed new, high-definition color cameras all over campus. Now, not even a rebellious local ant who strays too far away from its colony can go unnoticed by Paly administration.

Ant brainwashing aside, I was indeed hoping that the thieves who were responsible for the bike-napping would be identified so that I could receive compensation for my loss.

I approached the single monitor that had an expansive series of camera angles from around the school scattered across the screen. To my astonishment, it did not take more than a minute to find the exact time and place when the bike disappeared. The perpetrators even smiled for the camera.

Now I have my bike back, and I have the cameras to thank. If not for the cameras, I would not have my bike back. That’s simple logic. So is this article biased by personal experience? Yes. Is that justifiable because this is still an opinion article? Yes. Is it likely that I have lost the vast majority of reader focus due to my convoluted “ant brainwashing” exaggeration? Probably. But that is not important. What is really important to the Paly community is a vast network of security cameras providing a watchful eye over our campus.

Any paranoia that stems from one too many readings of “1984” is completely illogical and unfounded. You do not see any “Big Diorio is Watching You” posters hanging around campus. This is precisely because Paly’s faculty is very responsible with this new technology and has neither the will nor the time to see the school devolve into a dystopian hellscape reminiscent of “1984.”

My opponent in this debate, Joseph Yang, argues with a thesaurus at hand that the “the worst and probably the most relatable atrocity that the security system could potentially commit is that it would allow even the most bureaucratic details of the student handbook to be enforced, such as the provision that limits student intimate interaction with a teacher to the point of estrangement.”

My rebuttal is to state that there exist regulations for good reason, as the recent allegations held against teachers for sexual misconduct have proven beyond a doubt that there should exist at least a minimum level of surveillance.

Furthermore, we as a collective must recognize the fact that, behind the cameras, there is a being capable of emotion and empathy. A deeply caring individual whose only interest is preserving the sanctity of our school from ruffians, criminals and ne’er-do-wellers in the most non-Orwellian manner possible. That individual is vice-principal Jerry Berkson, who wants nothing more than for Paly to continue being a free-thinking community.

The Paly administration has earned our trust after all these years of encouraging student liberty and rights to freedom.

Furthermore, granting the schools this kind of surveillance will have no foreseeable impact to our liberties as students. There’s a fine line between preserving authority in a militaristic fashion and catching bike thieves. I ask you, Joseph, what kind of activities are you afraid that administrators might catch a glimpse of? What are you so afraid of?

It is for these reasons, among others, that the Con is wrong. I have reason to suspect that Joseph is in fact the leader of a band of hooligans whose very industry of encouraging rebelliousness among ants is being threatened by the new security cameras.

American core values have always centered around liberty. Benjamin Franklin once wrote that those “who can give up essential liberty to obtain a little temporary safety deserve neither liberty nor safety.”

With a few exceptions, Americans have chosen to value freedom over security as the latter concern has always struck a fear-mongering tone reminiscent to that of the dictators and monarchs of the ‘Old World.’ However, at least since the Cold War, the atmosphere around the country has changed to one of fear and strife, with the debate of security vs freedom becoming an integral part of the American fabric.

And now it seems that the ideological conflict of freedom vs. safety has reached Paly with the installation of security cameras around the school. Paly students now live on a campus monitored by the same high-tech security cameras used in casinos and high-security banks.

To be fair, the new security system has its merits. It can be used to reduce bicycle theft and potentially other illegal activity, as it did for Jacques.

The problem with security cameras is not its immediate blessings, but rather the precedents that they will establish. Here’s why: Paly is known for its excellent education; the school board will often attribute the school’s high rank to the quality teachers and facilities. However, an unofficial factor that has contributed greatly to Paly’s success is the liberal atmosphere that pervades the campus.

As history shows, governments tend to create a set of legalistic and sometimes arbitrary set of rules in order to govern society. The administration is no exception, as it has created a monstrous bureaucracy full of arcane protocols and labyrinthian concords all compiled into something called the student handbook. The only difference that the “improved” security systems could make is in more effectively imposing the will of the distant governing body called the school board onto the students.

The security system on campus will open the door for future principals to increase the monitoring of activity around campus. It has the potential to grow to the point where students are monitored for minor things such as when they leave the classroom to go the bathroom.

Of course, many people, especially Jacques and his gang of draconian, authoritarian despots, are skeptical that Paly will naturally evolve to become some Orwellian campus.

To be fair, the skeptics have a point. Paly will probably not become anything close to what we’ve seen in George Orwell’s infamous book “1984,” for many years. However, even though it may seem extreme in the current status quo, one has to remember the school administration has the incentive to monitor student activity and increase restrictions because it ostensibly seems like “progress.”

An end-of-the-year report touting increases in attendance would seem like a positive improvement to the school board, and one could easily imagine an ambitious principal instituting policies that strictly enforce the myriad of rules in the student handbook. However, to what end? In pursuit of an ideal, Paly could lose its cultural soul, which would be a cost that would greatly outweigh any perceived superficial benefit that could be presented in a graph.

Paly cannot continue to open up avenues of repression for the sake of “improvement,” otherwise Paly loses the one thing that distinguishes itself from Gunn: its cultural swagger. And that is something I am sure not even Jacques with his gang of fear-mongering dinosaurs would be willing to afford.

Also, in response to Jacques claim that I am a hooligan with a conflict of interest, all I have to say is that I feel sorry that Jacques has fallen victim to a system that demands his conformity and coerces him to have an opinion that supports an Orwellian school of thought. For the rest of the readers, however, just remember this: don’t be a sheep.